The Roar
2nd June, 2019
8
Join the conversation
1841 Reads
Advertisement
Write for The Roar

Andy Ruiz Jr has caused a major boil over in the boxing world, downing the previously undefeated Anthony Joshua to claim the WBA, Super, IBF, WBO and IBO heavyweight titles.

Joshua entered the bout as the clear favourite after Ruiz had signed on for the fight in late April as a replacment for Jarrell Miller, who was ruled out following drug test failures.

However from the third round, Ruiz threatened to cause a massive upset.

After getting knocked down Ruiz quickly fought back with a thunderous series of hooks, turning the tables and knocking Joshua down twice in reply.

He would knock Joshua down twice more before the referee decided enough was enough in the seventh round.

The loss is Joshua’s first after 23 professional bouts.

For Ruiz, the new heavyweight champion of the world, the win is his 33rd and undoubtedly the sweetest of all.

Joshua, who has a rematch clause in his contract, confirmed immediately after the fight that he will “100 per cent” take on Ruiz again.

WATCH: Logan Paul mocks Floyd Mayweather after he fails to knock him out

It was an experiment to see whether an amateur YouTube sensation in Logan Paul had any chance against the professional undefeated pro in Floyd Mayweather jnr. 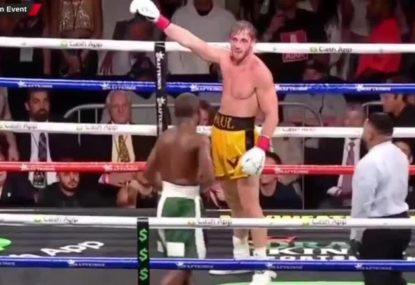 WATCH: Logan Paul mocks Floyd Mayweather after he fails to knock him out