Queensland’s match against the Jaguares started with a tribute to club legend Scott Higginbotham, who was recognised for his 100th cap, followed by a fearsome challenge to the Jaguares by a troop of Indigenous warriors for the Super Rugby Indigenous round.

The match then got underway, and the Reds opened the scoring in the 13th minute. Captain Samu Kerevi punched through the opposition defence as he has so many times this season, and sent away Chris Feauai-Sautia to score.

In the 24th minute, the Jaguares returned the favour, with winger Santiago Carreras scoring his first Super Rugby try off a lightning movement by the Argentine backs.

Carreras resembled that other Latin American swashbuckler, Zorro, as he ran deftly ran the tightrope of the sideline line to pick up a grubber kick by his fullback with his foot, touching down the perfectly weighted nudge ahead of Reds defenders to score.

Higginbotham also starred, giving fans some vintage moments. His intercept of a Jaguares pass and kick ahead towards the end of the first half was classic Higgers.

So were the perfectly timed hits on attackers when the Reds were desperately defending the line. Higginbotham combined with flanker Liam Wright, who got over the ball, to force the penalty and relieve the Jaguares’ relentless pressure. It was great to see Higgers at his best and he will undoubtedly be missed by all when he leaves at the end of this season. 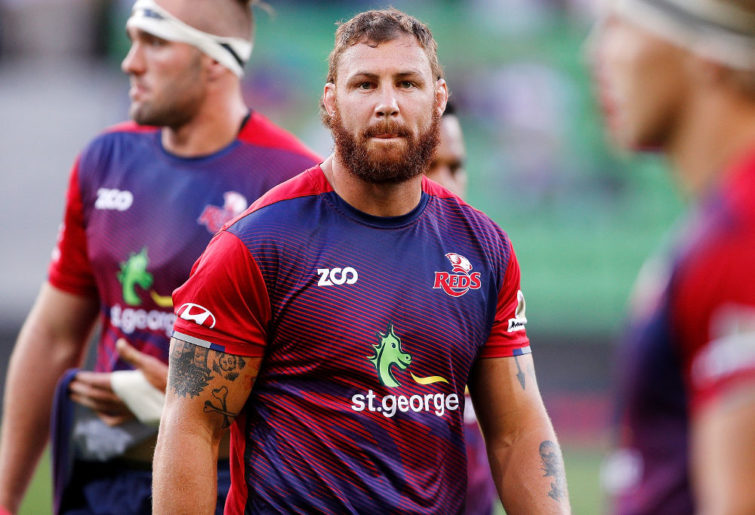 As the match wore on, though, the class of the Jaguares showed, with the Reds having to work hard to stay in touch, mainly off Bryce Hegarty’s boot.

They copped a schooling in the line-out and rolling maul, missing Izack Rodda, who was on Wallabies rest for this match. But it was good experience for the newer Queensland forwards.

There were some feisty moments but the crowd were respectful. It was awesome to enjoy the pleasure of standing with other Reds fans to show Jaguares hooker, captain and Argentine rugby legend Agustin Creevy our appreciation with a round of applause as he was substituted.

By the 76th minute, it looked like the Jaguares had the Reds with a 16-29 scoreline. The hosts were having none of that, though, getting a scrum deep into the visitors’ half and sending it through multiple hands to the other side of the paddock for Jock Campbell to score in the corner.

Hegarty converted from the sideline, and at 23-29 with three minutes to go, the excitement in the stands reached boiling point.

The Reds obliged by winning possession, with Kerevi putting in one of his clever kicks to pin the receiving Argentine back the sideline, forcing a kick return under pressure. The ball came back to Kerevi, who this time ran it hard at the Jaguares’ line, with thousands of fans roaring and willing our captain to create a miracle.

Kerevi looked to do just that, passing outside to Matt McGahan, who had Duncan Paia’aua outside him. But then from nowhere the Jaguares’ Zorro impersonator Carraras swashbuckled from the line and snatched an intercept.

Despite a gallant effort by Hegarty to run down the Argentine speedster, it was not to be, with Carreras executing the coup de grace to the gallant Reds by touching down in the corner. It was like a rapier to the hearts of Reds fans who could only applaud the excellent play.

Despite the loss, it was a fun game that demonstrates the Argentinians are bringing something different to Super Rugby, which the tournament sorely needs.

Last week after the Argentine franchise dished out similar treatment to the Waratahs, Wallabies great Phil Kearns suggested that a Test quality team like the Jaguares does not have a place in Super Rugby – a point that a lot of Australian fans agreed with at the time.

On reflection, though, Kearns and the rest of us could have framed it differently. We like having the Argentinian team in the competition so much that we want to see Argentinean teams more often, so let’s have another one sooner rather than later.

Perhaps instead of putting the Sunwolves through the whole of next season knowing that it will be their last, another South American outfit could replace them in 2020?

Whatever the case, until the Jaguares’ international players next visit Suncorp with the Pumas this July, we can only say olé!