The Lord of the Flies, fly-halves, footballers and other matters

Rugby is a beautiful, complex game of sweeping attacks and aggressive tackling but it is also a game of combative scrummaging, skilful, rolling mauls, patient forward play and I see this week, intriguing kicking duels.

Should we not embrace the whole game?

Rugby is also a sport played professionally by at least 16 countries, many of which have improved greatly in the past decade.

With the Wallabies competing, but failing to dominate, in international competition, are we, the Australian rugby public, too demanding? With the professional era and its corporate speak of brands, franchises and a sporting marketplace, Australian rugby followers have become like the shipwrecked orphans in William Golding’s famous novel The Lord of the Flies.

Lost, bewildered, bickering, harking back to better times, not sure whether it will ever end….

The true believers of the Australian rugby public are simple souls. They have two core needs. Firstly, a Wallabies squad that we can love and be proud of, win, lose or draw.

Secondly, a domestic, provincial competition that not only develops, but showcases the emerging talent and in a format that we can get fired up about.

Inspired by reading the venerable Harry Jones’s piece last Saturday morning, I have been pondering just who the Wallabies selectors might select for the Rugby World Cup based on two criteria.

This first criteria is based on a long held tradition in Australian sport of characters we can love. Blokes that you would want beside you in the trenches. Blokes who you would enjoy a Fanta with.

Criteria 2: Pick the footballer over the athlete, pick the students of the game. This second criteria was spawned from a Rod Kafer comment on Fox Sports commentary regarding the difference between a footballer as opposed to an athlete playing football.

Kaefer should know, he was the former. Great rugby teams have students of the game in them – Nick Farr-Jones, Mike Lynagh, George Gregan, Steve Larkham, John Eales…These players often find the solutions, perhaps more so than their coaches.

Channelling Golding once more, central characters in The Lord of the Flies, Ralph and Piggy and the strong-minded Jack seek order via the Conch, a big shell, held by the meeting’s speaker, symbolising order and civilisation, which they all must respect.

Without digressing on the well-worn topics of freedom of speech and certainly not wanting to talk politics or religion at this dinner party, ponder the following Rugby World Cup 31-man Wallabies squad.

I think it would provide a warm glow inside the coldest of band-wagon deserters.

Win, lose or draw, we have loved Dan Crowley, Rob Edgerton, Tim Horan, George Smith and Stephen Larkham, not because they can lift heavy things or run fast and jump high but because they were footballers – complete footballers, fierce competitors and could read the game.

These five players have been among super rugby’s standout footballers, rather than its most impressive athletes. I see this morning that at least one other Roarer, shares my views with Will’s support for the bald and the balding.

My 31-man Rugby World Cup Squad is as follows.

With Kepu, and to a lesser extent Ala’atoa, playing both sides of the scrum, the Wallabies can also blood a bolter in either JP Smith (or if not, Harry Johnson-Holmes). All have squeaky clean off-field records, as hardworking, introverted props, that you would be happy to take home to meet your folks.

Fainga’a is an NRC product from the NSW Country Eagles, and should be selected as any hooker that scores that many tries must be hungry. Paenga-Amosa for his passionate, national anthem singing. Fitzpatrick is the third hooker as a good team man, providing ticker, a tradesman like approach, always punching above his weight and providing an accurate throw.

Rob Simmons has proven everyone wrong and Aussies love a comeback. He is clearly the no one, line-out exponent in the country. Simmons may not have to be in the big game day 23 to make a big contribution.

Isi Naisarani as the run on number 8. Naisarani has proven to be a smart man in reuniting with Coach Dave Wessels at the Rebels. The hard-running Fijian born former Brumby, was Player of the Year at the Western Force in his debut year under Wessels.

Naisarani is another good example of the importance of the NRC or similar competition, as a stepping-stone for new talent. More on this later.

Luke Jones has demanded selection for the bench with such value, covering 4,5,6 given Pocock covers 7 and 8. Lachie McAffrey covers all three positions and is very much the footballer, not the athlete.

Notable omissions in the forwards include, Tom Robertson, James Slipper, a series of hookers and a few casualties due to the Luke Jones, selection including the more established Ned Hanigan, Peter Samu, Jed Holloway, Jack Dempsey and to a lesser extent Rebels teammate and prospective Wallaby Matt Philip.

Scrum halves: William Genia to play the lead role with cameos from the running halves, Jake Gordon with Tate McDermott picked as the future investment. 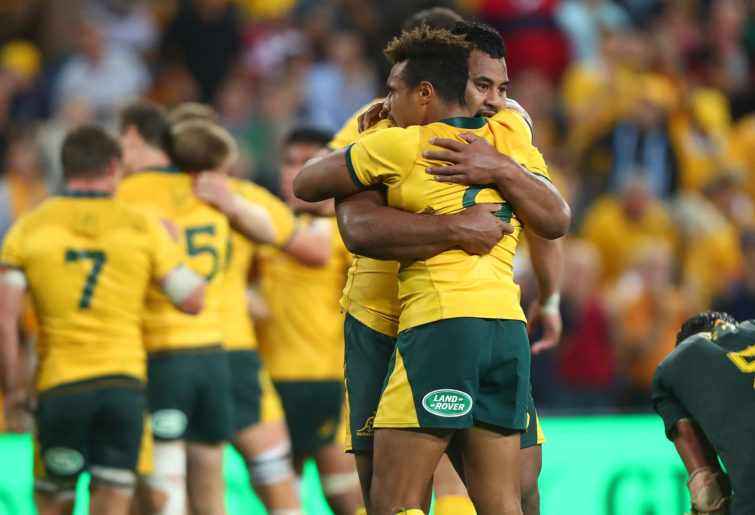 How will the Wallabies go this World Cup? (Photo by Chris Hyde/Getty Images)

Flyhalf: Bernard Foley to lengthen his mo to a fully blown handle-bar moustache and run and tackle like he did against the Reds.

With two specialist fullbacks selected, unapologetically, on the wings and To’omua and Beale covering flyhalf, the other backs become the versatile Reece Hodge and Jack Maddocks plus Billy Meakes, the footballer.

Those pushing the Kerevi-Kuidrani model of two hard-running centres are overlooking the subtlety of the best midfield combinations. These have always had the thinking ball player and the straight runner, not always in that order. Tim Horan- Jason Little or in reverse, Ma’a Nonu-Conrad Smith.

The 13th back should be a bolter, a development player, but someone not out of place on the bench if injuries require their selection deep in the tournament. I think Bryce Hegarty, 26, is the versatile and canny footballer for the job.

With the simultaneous ageing of Foley, Beale, Quade Cooper and Christian Lealiifano, the Wallabies must take Hegarty to the World Cup. Unfortunately for Quade Cooper, his selection is all or nothing, given the cover provided for flyhalf by other squad members including Hegarty.

Now, while I still hold the conch, to the other matter of what to do with the NRC? We simply must have a second-tier competition for professional rugby, to develop new players and improve the super rugby clubs.

Occasionally a player may emerge as a test-ready, 20 year old, but most need time to learn the craft and physically mature, as we have seen with players like Fitzpatrick, Naisarani, Jones, Meakes and even Dane Haylett-Petty. With the Super Rugby playing rosters usually full before the NRC is completed, the end of season provincial competition is more useful in providing some high-level rugby for emerging players such as the Waratahs’ Mac Mason and Lalakai Foketi.

Standing back from it to see it with clarity, the epiphany is simple. Out with the beleaguered NRC, with its empty grandstands and city players playing for the country teams and vice versa resulting in lack of meaning.

Forget a competition based on Brisbane and Sydney clubs to achieve true tribalism. In with the new NRC, consisting of the four Super Rugby franchises, plus Fiji and The Western Force. Those on Wallabies duties are replaced by the fringe players who don’t get much airtime, plus the prospective players from club-land that are the next best and the super rugby clubs are considering.

Alas, the very same players as the current NRC! Same time of year but with the benefit of ready-made, not manufactured tribalism.

This allows efficient use of the franchise resources rather than double up on costs and personnel and it is easy for the fans to follow. Budding coaches, physios, managers can all participate. The super rugby clubs bargaining power for sponsorship dollars and the collective television rights will all be enhanced.

Call them New South Wales, Queensland, ACT and Victoria if SANZAAR have an issue with who owns what. Take the games to the heartland grounds. There you have it.