Wallabies crave a natural ball-runner at No.8 and it needs to be Naisarani

As uplifting as it’s been to see Folau Fainga’a on top of the Super Rugby try-scoring list, it can’t paper over the issue that Australian forwards have struggled to make an impact with the ball in general play this season.

Fainga’a, the mobile Brumbies hooker, has scored his ten tries from the back of his side’s potent rolling maul to have him level with the likes you’d more expect to be at the head of the five-pointer pack: Jack Maddocks, Sevu Reece and Ngani Laumape.

But generally, the four Australian sides aren’t flush with ball-running forwards that dent the defensive line.

The shortage usually comes into sharp focus when the Wallabies find it hard to get over the advantage line from tight phase play involving the big men. And often it’s blamed on the balance of the back-row, with the Pooper combination – David Pocock and Michael Hooper – regarded as too lightweight and hence contributing to a lack of punch with the ball carries.

However, most of the top nations have their bullocking beasts that can get their teams on the front foot, and they don’t always rely on back-rowers.

Ireland are a great case in point. Their props Tadhg Furlong and Cian Healy bullied the Wallabies during the June Tests last year – not just in the scrum but with strong ball-running.

England have Billy Vunipola and Maro Itoje; South Africa boast Malcolm Marx, Warren Whiteley and Siya Kolisi; the All Blacks have power and footwork with Brodie Retallick, Kieran Read and Dane Coles; Wales have mobile back-rowers Toby Faletau and Ross Moriarty to get them going forward.

At the World Cup, the Wallabies won’t need to rely on powerful forward charges to account for Fiji, Uruguay and Georgia in pool matches. But to go with Wales, and to win knockout games in Japan, they almost certainly need to pick forwards that can poke their noses through the line – and even better, have a bit of passing and off-loading ability in traffic.

Who can provide this? Taniela Tupou was meant to be that weapon to bump off defenders, but aside from a few memorable charges over the last two seasons, the Queensland prop hasn’t proven as effective with the ball at Test level as many had hoped or expected.

His Reds teammate Lukhan Salakaia-Loto is another that has produced some aggressive spurts for the Wallabies – particularly in Bledisloe Cup matches – but hasn’t been consistent for long periods at Test level.

What about some of the other Wallabies hopefuls for the World Cup in the forwards? If you’re Michael Cheika and Wallabies forwards coach Simon Raiwalui, who are you looking at for ball-carrying strength?

Rob Valetini is a tough ball-runner at No.8, but the 20-year-old’s season has been ruined by injury.

Born in the Fijian capital of Suva and only 24, the Melbourne Rebels back-rower is a top-quality ball-runner and the type of forward that can cause trouble for defences.

Naisarani has certainly been on Cheika’s radar, having been a development player on last year’s Wallabies tour of Europe and has been invited on a number of recent Wallabies training camps.

He’s got power and footwork, and pops up all over the field ready for a run. In the top-10 ball carriers in Super Rugby, Naisarani is eighth with 139; the other two forwards in the list are Blues No.8 Akira Ioane (152) and Sharks back-rower Daniel du Preez (145). 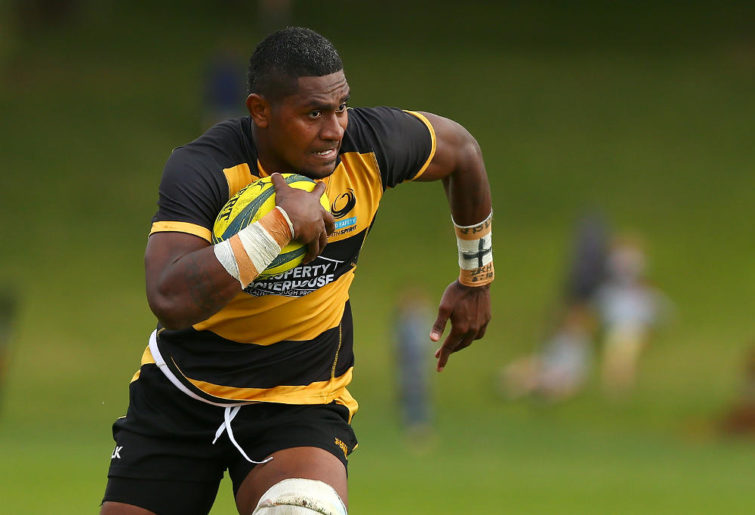 Isi Naisarani runs the ball during his time with the Perth Spirit. (Photo by Paul Kane/Getty Images)

That count doesn’t account for run effectiveness, but he’s proven he knows how to beat defenders with a bit of speed and agility.

Someone like Pocock isn’t a natural evasive ball runner, but it’s evident that Naisarani – like many Fijians – is comfortable trying to find space in between defenders.

In fact, Pocock is a big fan having played with him at the Brumbies in 2018 before Naisarani’s move to Melbourne this season. Naisarani reminded Pocock of Radike Samo with his ball-running and off-loading skills.

Pocock has filled the No.8 Wallabies jersey recently, along with Dempsey and Sean McMahon. But in just over six weeks’ time when Australia run out for their first Test of 2019, against South Africa in Durban in the opening round of the shortened Rugby Championship, the need for forwards who can bend and break the defensive line with ball in hand means Naisarani should be the new Wallabies No.8.