The modern ODI game is filled with batsmen who deal liberally in fours and sixes, even from the start of their innings. But few things are more disheartening for a bowler than sending down a perfect delivery only for it to be skilfully deflected into a gap for a single.

Key strategy: Will Australia follow South Africa’s lead against Kohli?
No one in world cricket does this better in ODIs than Indian skipper Virat Kohli. The megastar has a remarkable ability to take a bowler’s best delivery and convert it into a single, from the very first ball he faces.

This makes it very difficult for the opposition to build pressure on Kohli, or to have time to work him over with specific plans. It also allows him to get his eye in while gliding effortlessly to 25 from 30 balls, before then expanding his game and bullying the bowlers.

Kohli’s favourite method of getting off strike at the start of his innings is by opening the face while defending good deliveries and running the ball to third man.

South Africa set about blocking this rich scoring avenue. The Proteas placed a fieldsman in a very unusual position for ODIs at a fine gully, or perhaps where a fifth slip might stand. Kohli’s instincts saw him repeatedly glide the ball straight to this fieldsman on the bounce.

Denied of this prolific stroke, the Indian got stuck in the mud, scoring just a solitary run from his first 15 balls.

I don’t have the stats at hand, but I would wager that very, very rarely in his ODI career has Kohli ever started an innings so slowly.

And it was in a large part because of this clever field placement and the skill of the South Africans to maintain a good length on a fourth stump line, the kind of deliveries Kohli normally runs to third man.

Australia should try a similar tactic to see if they can dot up the Indian legend.

Key Australian: Pat Cummins
The rapid right armer is in extraordinary form, having hoarded 30 wickets at an average of 12 from his past 10 one dayers.

Cummins was pivotal as Australia fought back from 0-2 down to record an amazing 3-2 series win in India three months ago, taking 10 wickets at 14 across their three victories.

He is especially important against an Indian side that has one of the greatest top fours in ODI history. So dominant are Rohit Sharma, Shikhar Dhawan, Virat Kohli and MS Dhoni that the rest of the Indian batting unit is often left with little or nothing to do.

Sharma, Kohli and Dhoni each are remarkably calm and have a rare ability to steer their team’s innings, which is why it is so crucial to break past them into India’s middle order. On the odd occasion the top four falters, the Indian middle order has tended to look vulnerable.

Cummins is one of the few bowlers in the world right now that has the dynamism and the skill to trouble India’s commanding top order. 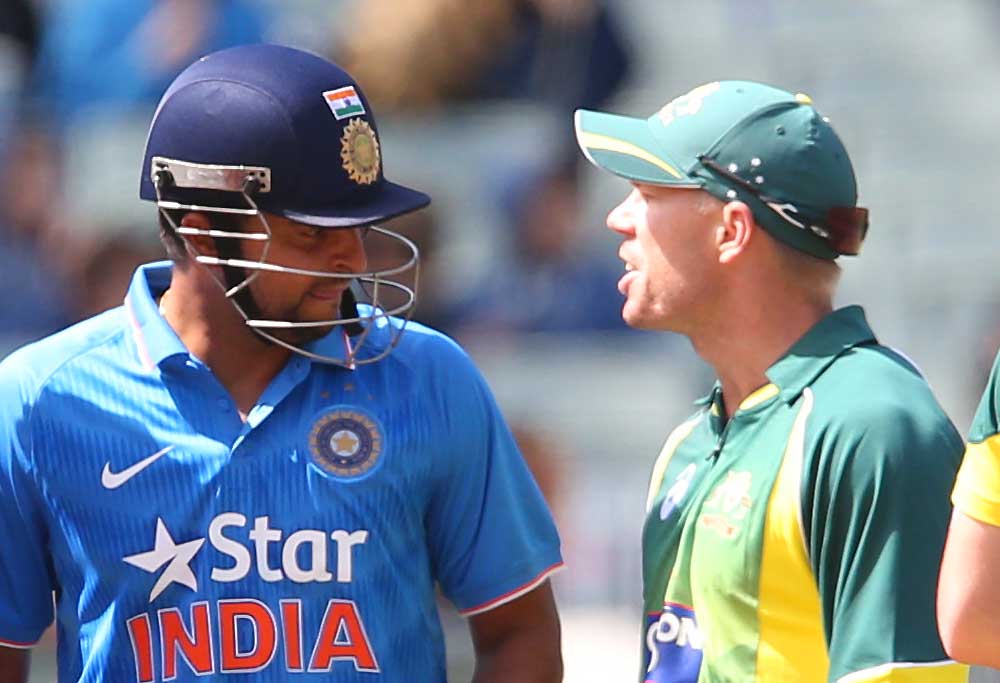 Key Indian: Rohit Sharma
Forget Kohli or Jos Buttler or Dhoni – no batsman is a bigger nightmare for Australia in ODIs than Sharma. Despite Australia having boasted an elite bowling attack across his entire ODI career, Sharma makes runs for fun against the Aussies.

Consider this: Sharma has seven tons from his 70 ODIs against England, South Africa, New Zealand, Pakistan, Hong Kong, Ireland and Afghanistan. Yet he has made that same number of tons from just 37 games against Australia.

Across those matches against the Aussies Sharma has churned out a jaw-dropping 1,980 runs at 62, all at a strike rate of 95, which is comfortably above his career mark of 88.

Sharma has no glaring weakness in ODIs but he does have one obvious strength – short-pitched bowling. South Africa put him under pressure early on by maintaining a bail-height length. Then they dropped a couple short,

Sharma cashed in and was never reined back in. Even if Sharma drives a few boundaries early on, Australia must not pull back their length with the new ball.

Wildcard players – India: Jasprit Bumrah
Ok, I admit calling Bumrah a “wildcard” player is folly given he’s the most bankable bowler in the world. But I had to delve into his influence in this piece. Right now Bumrah is bowling at a level very, very rarely ever witnessed in ODI history.

Only the likes of Glenn McGrath, Wasim Akram, Joel Garner, Curtly Ambrose, Waqar Younis and Mitchell Starc at their absolute peaks have bowled pace with the same mix of precision and incision Bumrah currently showcases.

Bumrah’s incredible accuracy, startling pace, unusual angle and befuddling changeups mean he is elite with the new ball, a giant threat in the middle overs and also the world’s best death bowler.

It is with the shiny ball, however, that he poses the biggest challenge to Australia. Bumrah’s ability to get the ball to seam back into right-handers haunts Aaron Finch, to the extent that I can’t see the opener having an impact today.

The Indian quick is also a sensational bowler to left-handers from around the wicket, which spells trouble for David Warner and Usman Khawaja.

Australia: Glenn Maxwell
In wrist spinners Kuldeep Yadav and Yuzvendra Chahal, India have by far the best spin combination in ODI cricket. Both of these men are natural wicket takers who regularly turn games for India in the middle overs.

That pair often intimidate opposition batting line-ups, causing them to go into their shells. This won’t be the case, however, for Maxwell, who has no fear of any spinner in world cricket.

The cavalier all-rounder has a great ODI record against India, having made 718 runs at 34 with a scorching strike rate of 128, which translates to 7.7 runs per over.

Make no mistake, the Indians are extremely wary of Maxwell. They know he is one of only a handful of batsmen at this World Cup who can eviscerate their gun spinners.