The ACT Brumbies have five consecutive wins as they ran out 35-24 winners over the New South Wales Waratahs at Bankwest Stadium in Western Sydney.

The Waratahs were only one slip-up away from not making the Super Rugby finals and could not afford to drop this match. They scored a five-point victory over the Rebels last week and were looking to get their first ever win at Bankwest Stadium.

The Brumbies, on the other hand, were sitting pretty atop the Australian conference coming off a comprehensive victory over the Sunwolves last round.

The Waratahs were first to get on the board in the feisty Aussie derby. In the tenth minute, Tom Cusack was penalised by referee Ben O’Keeffe for being offside which allowed Bernard Foley to put a relatively simple penalty kick through the posts.

The Brumbies were not fazed however as they worked their way into the ‘Tahs half.

Just metres from the line, Rory Arnold collected the ball from the back of the ruck. Waratahs forward Tom Staniforth thought Arnold was going to pass and turned his body away from the 2.08-metre giant. Arnold spotted the opportunity and got the better of Tom Robertson in contact as he slammed it down on the chalk. Christian Lealiifano converted the try to give the Brumbies an early four-point lead.

A few minutes later, the men from the ACT found themselves close to the line once again. They headed towards the right wing as they ploughed through the forwards. Joe Powell eventually distributed to the backs and Andrew Muirhead collected the pass.

He bumped off Foley before burrowing towards the line. It seemed as if Adam Ashley-Cooper had held him up but Ben O’Keeffe saw a grounding and awarded the try. Lealiifano’s conversion made it 14-3.

The Brumbies continued on their merry way as they struck twice in as many minutes.

With possession on halfway, former Waratah Irae Simone delivered a cut-out ball to Toni Pulu on the left wing. He skipped down the touchline before finding Tevita Kuridrani on the inside. It looked as if he would go all the way but Lachlan Swinton managed to drag him down.

Kuridrani offloaded in the tackle to Simone who stepped inside the covering Curtis Rona to dot down for the Brumbies’ third of the night. Lealiifano’s third conversion of the night saw the Brumbies roll out to a 21-3 lead. 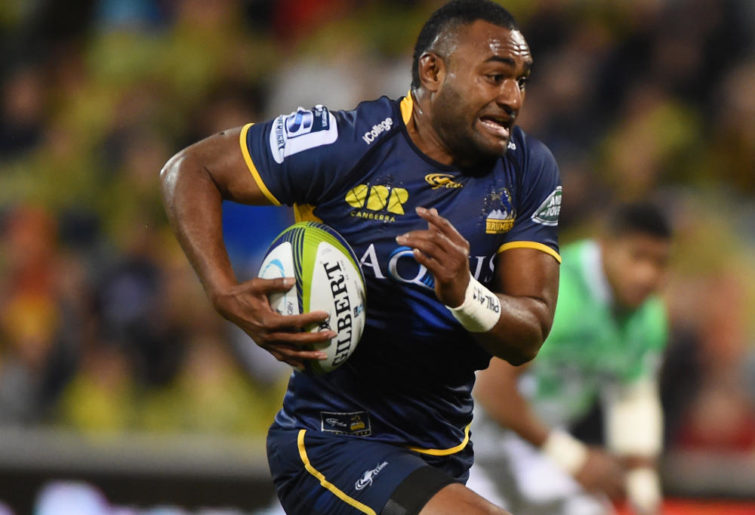 The Brumbies could do no wrong as they heaped more misery upon the hosts.

When Michael Hooper was penalised for a deliberate knock-down, Tom Banks put it deep into the corner for the Brumbies to attack off. They went to their traditional lineout maul and set it up strongly. They began to trudge forwards and eventually the Waratahs defenders sheared off.

The momentum propelled the Brumbies over the line as Folau Fainga’a scored his 11th try of the season. Lealiifano’s perfect night from the boot continued as he knocked over the conversion.

The Waratahs had to fight back and they broke down the right wing in the 39th minute. They were playing with speed at the breakdown as they recycled quickly. With the line within reaching distance, Phipps found Swinton running a short ball on the left. It seemed certain he would score until he dropped it cold as he fell over the line.

This missed opportunity meant the score stayed at 28-3 at half-time, the Brumbies leading by 25 points.

The start of the second half saw the Waratahs look to halt the rampaging Brumbies train and they ended up landing the first blow in the second term.

Two penalties conceded by the Brumbies allowed the Waratahs to piggy-back their way up-field.

The ‘Tahs found themselves deep in Brumbies territory as they looked to penetrate the defence. They worked across the field before Nick Phipps sniped from the back. He picked up and sold a huge dummy before lunging for the chalk. He managed to get there and scored a crucial try for the home side. Foley’s conversion reduced the margin to 18 points.

The match seemed to stagnate during the middle of the half as neither side could string together large amounts of possession.

The Waratahs finally got close to the line once again and it seemed they were going to score. But Jed Holloway imitated Swinton from the first half and dropped the ball as he was diving for the try.

Lealiifano managed to dislodge the ball out of Holloway’s hands before he grounded the ball as the ‘Tahs grew frustrated. Luckily for the home side, they were playing under a penalty advantage and were able to return to the infringement.

The Waratahs retained possession and were keen to close the gap once more. Foley got his hands on the ball and spotted some room in behind the defensive line. He tapped a grubber kick through for Ashley-Cooper to chase and he got a perfect bounce as he slid over for a well-executed try. Foley’s conversion kept them in the match, the score 28-17. 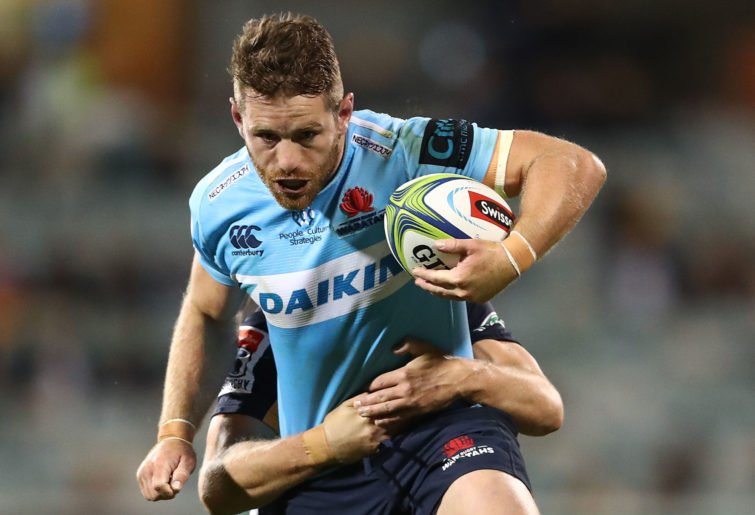 The Brumbies had struggled to add to their score from halftime and were searching for a way to put the match to bed. They had a scrum just less than 20 metres out from the line and were under pressure from a resurgent Waratahs pack. Tom Cusack picked it up from the back and managed to slip his way through the Waratahs’ defence.

He charged towards the line and was awarded a try even after a TMO review. Lealiifano’s fifth conversion of the evening well and truly put the game to bed with four minutes left to play.

The Waratahs edged their way back into the Brumbies half and received a penalty in the right corner. They tapped it quickly and sent it wide hoping to find some spark in the backs. Foley was dragged back by Kuridrani but the ball spilt out of the ruck and replacement scrum-half Jake Gordon picked the ball up and popped it to Curtis Rona. He scooted down the left touchline and dotted down for a late consolation try.

Foley’s conversion reduced the deficit but did not change the result. The Brumbies finished 35-24 winners over the ‘Tahs.

The Waratahs head to Invercargill next week to face the Highlanders in the last match of the regular season. Daryl Gibson looks set to rest at least five Wallabies next week which means the side is likely to see a number of changes.

The Brumbies continue their red-hot form in Super Rugby to record five wins on the trot. They face a tricky challenge against the Reds next week who are playing for pride at the end of their season.