Judicious use of depth the difference between Australia and the Windies

Trent Bridge has never been one of Australia’s more joyous venues, but the West Indies, who hadn’t lost an ODI since 1984 at the iconic ground, weren’t expected to present as formidable a challenge as they did in reality.

The defending champions somehow found an escape route to prove they’re again genuine contenders. While both sides had the vast depth needed to dig themselves out of a hole, Australia’s cunning use of its roster had them leapfrog the opposition.

The first half of the game saw the Windies start from where they left off against Pakistan, strangling the explosive top order of Australia with their fierce display of fast bowling. It was bowling work reminiscent of the towering men from the Caribbean steaming in and instilling an unwavering fear, so much so that the best batsmen make unforced errors.

The Windies used their pool of five pace bowlers as good as any. The raw pace of Oshane Thomas and Sheldon Cottrell as the new-ball bowlers followed by the unrelenting speed of Andre Russell meant the top order could never settle down. Jason Holder took no backstep – the ringmaster made inroads through some intelligent setting of fielders and plucking Marcus Stoinis precisely when Australia were showing signs of recovery. 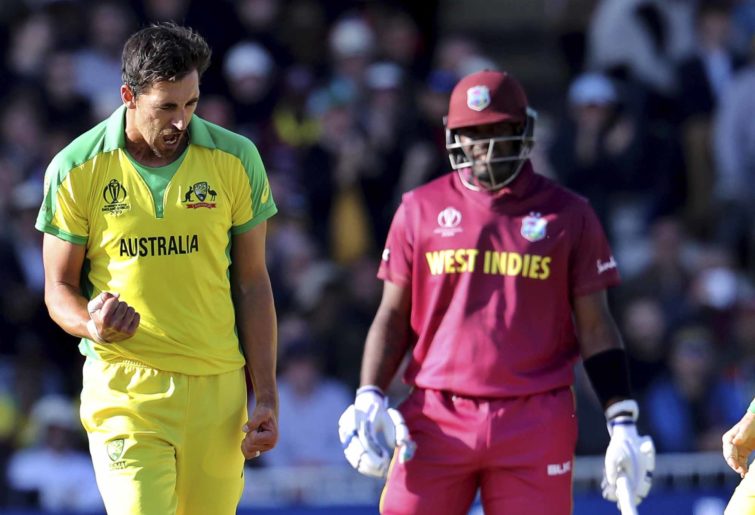 But the Australians never backed down when it came time to show why they’re the best in the business. Steve Smith looked the most comfortable of the lot, holding the fort. Alex Carey, as much as his selection as an able batsman had come into question, has gone from strength to strength. Although he took 15 deliveries to get off the mark, Carey toyed with the bowlers with some picturesque strokeplay.

When Carey edged one to Shai Hope at 6-147 Australia had managed to save face and appeared on track for a commanding total. This was the point at which Nathan Coulter-Nile walked in and redefined Australia’s batting depth. Although his bowling figures were shambolic, the speedster swept away the Windies with his herculean knock.

As deadly as the Windies were in the initial overs, it’s easy to build a case that their inability to clobber and sucker-punch in the later overs lost them the game from what seemed to be a winning position.

Coulter-Nile was timing the ball sweetly, mainly through the on-side. Being dropped by Shimron Hetmyer on 60-odd only aggravated the Windies’ misery. When a stunner by Cottrell saw Smith walking back to the pavilion, Coulter-Nile still kept them ticking for a total of somewhere between 300 and 320. Along with Pat Cummins and Mitchell Starc yet to come, it was conspicuous that Australia found their way from the bottom of the pit to post nearly a winning score.

West Indies’ depth is second to none, and yet Carlos Brathwaite, for his three wickets, seldom looked threatening to the magnitude of his colleagues. Contrasting that, Marcus Stoinis bowled four overs, giving away a mere 18 runs, finding the blockhole more often in the death overs.

With the bat the Windies rarely looked jittery. Even when Russell departed they still looked right on track. Aaron Finch’s complete belief in his new-ball bowlers never hampered his side, for all they ever did was bring Australia back into the game when it seemed like it was slipping from their grasp. Without a doubt it was the opposition’s inexperience and lack of level-headedness in the lower and middle order that cracked.

Such was the depth and the expertise of Australia that even when looking defeated they sprung to justify why they are the defending champions. Not that this Australian team, unlike the one that completed the World Cup hat-trick, are invincible; however, their never-say-die attitude hasn’t perished.

These are still early stages of a tournament in which the Windies, like all other sides, have shown that they aren’t just dark horses or the underdogs. The crown is very much in dispute, and it will only get harder for the defending champions as they progress.