What the heck has happened to David Warner?

When a squad brimming with slow-scoring batsmen was announced, I argued it was too conservative and that the Aussies would miss the variety and dynamism offered by Peter Handscomb or Ashton Turner.

Many voiced similar concerns despite the fact that, at that time, it seemed Warner at least would add an attacking edge to a top five which was otherwise one-paced.

That has not been the case, due to Warner’s fresh, defensive approach.

The best ODI teams have a healthy equilibrium between attack and caution with the blade. They have batsmen tasked with building an innings, with providing stability. Because these players protect their wicket, it gives licence for a second group to take on the bowlers, disrupt opposition tactics, and score at a swift rate that makes up for the dot balls chewed up by the first group.

Warner was meant to be in that second group, along with Glenn Maxwell, leaving Aaron Finch, Steve Smith, Usman Khawaja and Marcus Stoinis as the batsmen who would take their time at the crease.

Now that Warner has migrated to that larger group, it has left Maxwell marooned, the sole batsmen in the top six who is trying to bully bowlers.

It means the first five batsmen are all seeking to play themselves in, to construct an innings. A check of the calendar confirms this is 2019 not 1989, when structuring your batting unit in such a conservative manner actually made sense.

The bottom line is that, because of the squad they have chosen, Warner cannot be allowed to become a safety-first batsman. He has to be one of the designated destroyers.

This is a batsman who, in his previous 50 ODIs before being banned for 12 months, had scored at a blazing strike rate of 106.

Who just finished smashing 692 runs at 69 in the Indian Premier League opposed to many of the best bowlers in this World Cup. In the IPL Warner scored at 8.6 runs per over.

Since he returned for Australia, he has played eight one-dayers (including warm-ups) in which he has scored at a crawling rate of just 4.3 runs per over. That is about 50 per cent slower than Australia need him.

Because if Warner continues to plod along like this it will force the likes of Khawaja, Smith and Finch to betray their natural games. Those batsmen will have to play with significantly more aggression in order to make up for Warner’s slow scoring.

Khawaja should never have been moved from the opening position. The left hander has made 1019 runs at 53 at the top of the order, compared to 289 runs at 24 batting elsewhere. 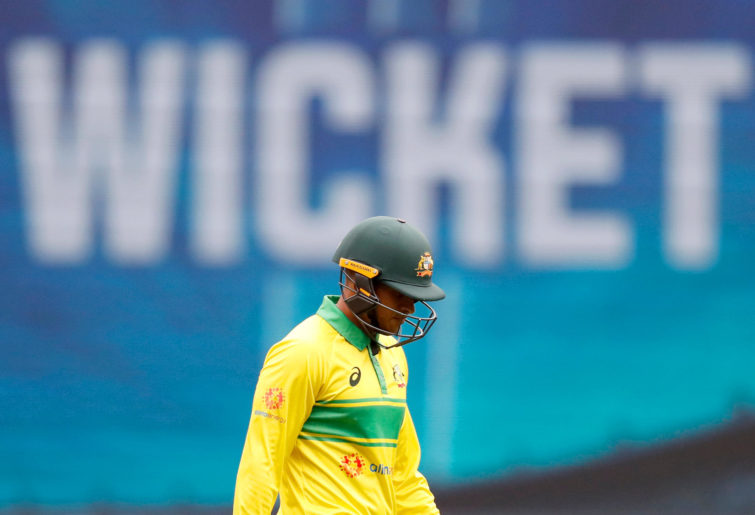 Warner should have been placed at three with the instruction to bat with the dynamism that has made him a superstar across all three formats.

Australia have enough steady batsmen that they can afford to give free rein to Warner and Maxwell. Instead, we have a bizarre situation where Warner has been reborn as an old-school, nudge and nurdle opener.

In crawling to 56 from 84 balls against India on the weekend, he all but assured his team would not chase down the target of 353. Wicketkeeper Alex Carey (55* from 35 balls) and Maxwell (28 from 14) tried to defy logic but the task was too great.

It must be noted that Carey is making tremendous progress as a late-order striker. In his 13 matches batting at six, seven or eight he has made 358 runs at 40 with a good strike rate of 102.

An opener in domestic one-day cricket, Carey was handed an unfamiliar role and has steadily grown into it. He is playing his part nicely.

What Australia need now is for their veteran opener to do the same.