A message to all rugby players: It’s ok to be not ok

Two weeks ago Vic Masters rugby celebrated one of the highlights of their season, what has now become an annual fixture, a curtain-raiser to the Rebels vs Waratahs match at AAMI Stadium, between the ‘Wannabees’ and ‘Old Blacks’.

Two matches were played, between the ‘over 35s’ and the ‘over 45s’; as always, spirited contests both on the field and in the function room afterwards. Rugby Australia CEO Raelene Castle was on hand to show her support for what is undeniably one of Australian rugby’s grassroots success stories.

However it was also an evening tinged with great sadness, with the Masters fraternity tragically losing one of their brothers, 37-year old Mike Ellis, the day before the event.

Born in Canberra, Mike grew up in Dalby, Queensland where, according to his step-father Peter, “He lived for sport. Football (rugby league) mostly, but anything he could get into. And he also had a real passion for racing motor bikes.”

After living in North Queensland, Mike eventually settled in Melbourne, working as a carpet layer, and embracing Vic Masters rugby, this year playing at fullback for the Southern Districts club.

Mike’s story is important because it highlights all that is good about Masters rugby – middle-aged guys enjoying their sport in a supportive, family-based environment, injecting life back into rugby clubs, some of whom are, or would otherwise be struggling.

But at the same time, Mike’s story demonstrates how tenuous, for any of us, connection with life can be. No matter the strength of the support network of friends and rugby colleagues, how vigilant we all must be in looking out for colleagues, friends and family members, who may be doing it tough.

The driving force behind Vic Masters, Ian Barker, explains how the organisation is much more than just a vehicle to organise games of rugby.

“One of our founding principles was to at all times emphasise community, not only by incorporating family, but promoting men’s health.

“Our playing pool of 300 (up 20 per cent on last year) already includes mental health professionals, but what is noteworthy is that some of our players have now gone on to become Beyond Blue ambassadors, because they see that there is more they can do to help.”

The reality is that any cohort of men aged between 35 to 70 will comprise a number who have experienced, or are currently experiencing, relationship breakdown, job loss, divorce proceedings, financial difficulty, estrangement from children and more.

A regular game of rugby and the camaraderie that exists around that is one thing. But as new Vic Masters President Brendon Matthews outlines, “We’ve realised that there is so much more that we can do for guys who might have found themselves in difficulty.

“From conversations that are had in and around the group, it’s usually not too hard to find out who might be at risk, and from there, for one of us to check in periodically and make sure that things are ok. But up until now that’s been an informal process, and it’s become clear to us that we needed to take things to the next level and provide a more formal level of identification and ongoing support for any of our players in need.”

That has culminated in the formation of the ‘Vic Masters Tight Five’, Vic Masters’ own internal Mental Health and Wellbeing working group, a support crew of five professionals within the fraternity who will play an active personal role in the support of any player in need.

With the emphasis clearly on community, the Vic Masters Facebook page is also a hive of interaction between players, supporters and sponsors, with Beyond Blue featuring prominently, alongside hashtags such as #ItsOkToBeNotOk and #RugbyisLife.

Barker and Matthews have worked tirelessly to ensure that Vic Masters enjoys support from a variety of sources, whether that be via commercial sponsorships, and within the game itself.

Both are full of praise for the support of the Victorian rugby union, Rugby Australia and the Melbourne Rebels’ CEO Baden Stephenson, all of whom have embraced Vic Masters just as their organisation has sought to align themselves closely in return, with the various administrative bodies. 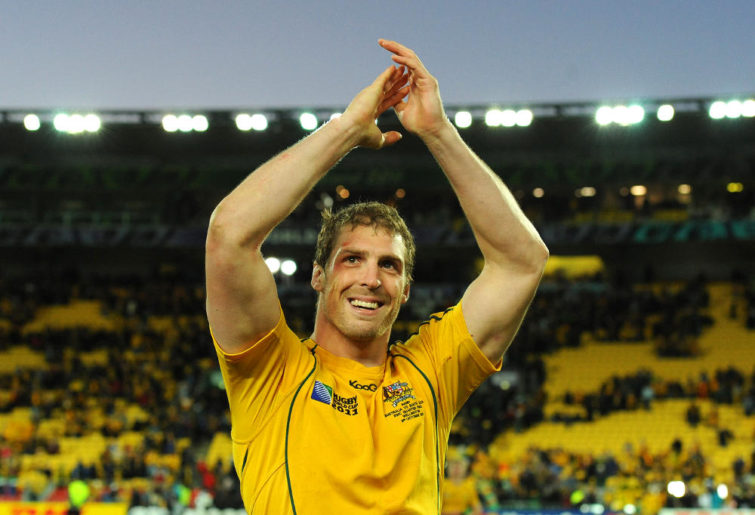 Dan Vickerman committed suicide in 2017 after a battle with depression. (AAP Image/Dave Hunt)

“Right from our resurrection in 2014”, explains Barker, “we realised that for this to work to its full potential, we needed to be affiliated to clubs, rather than operate as a distinctly separate, ‘golden-oldies’ style entity. It was important to us to have all players properly registered, and for us to use proper referees, and for the various rugby clubs to be able to enjoy hosting one Masters festival day per season.

“This model allows our players who may be shift-workers and who might have family duties and so who can’t commit every single week, to enjoy the benefits, via the Rugby Australia Xplorer App, to register and pay as they attend. Under the traditional subscription model, players who were required to commit to a full season sub, without being sure of getting value from it, often instead chose to quietly opt out.”

For her part, Castle is unashamedly enthusiastic.

“The Vic Masters is a fantastic model which keeps people involved in the game past their playing ‘prime’ and keeps them connected socially. It is one of the success stories of the Rugby community in Victoria and we are proud to see the great work they are doing for their community,” she says.

“The power of the Rugby community is an incredible thing, especially in difficult times like the Vic Masters have come through, and it is a reflection of this community spirit that they are working together to create awareness of, and combat mental health issues among men.”

To this outsider, three things stand out. Rugby has always been a ‘tough man’s game’ and many of us played rugby in an era where adversity, on and off the field, was dealt with by a clip over the ears and message to ‘harden the f*ck up’.

Rugby needed to move on, and in this and many other environments, it clearly now has – all without the game losing any of its physicality or competitiveness.

Secondly, it is clear that for every rugby player who might want to assert his or her individual right to publicly express whatever they like under the guise of freedom of religious expression, there are hundreds more for whom life is an ongoing, complex and difficult battle.

It is incumbent on every person in the rugby community to ensure that their words and actions are at all times respectful of others, no matter how genuinely held their own beliefs may be.

Finally, Vic Masters is one of many pockets around Australia where grassroots is healthy – completely at odds with the ‘rugby is dead’ narrative promoted by many media commentators.

What these examples have in common is a group of people – volunteers – who love the game, who have come together not to whinge about rugby politics or money that isn’t flowing to them, but to create a positive rugby experience for themselves and their families.

While there is enormous sadness at the loss of Mike Ellis, his stepfather, Peter, is full of praise for Vic Masters. “I can’t stress enough how fantastic these people have been. I know Mike loved playing rugby with these guys and our family has enormous gratitude for the support they have offered us during this time.”

The final word is left for Matthews, whose tribute posted on the Vic Masters Facebook Page included the following passage: “Mike, we will miss you running rings around us out wide, your cheeky grin and sharing a drink and a yarn after the game. We are sure you will be a regular starter in the game they play in heaven.

A memorial service for Mike will be held next Saturday 22nd June at the Vic Masters day, at Southern Districts Rugby Club, Seaford.