1: Only one team finishes each season considering it a complete success: the club holding up the trophy at the end of the grand final on the last Saturday in September.

But there are relative levels of success throughout the league – Carlton’s already matched last year’s win total, for example, and can only get better from there. Brisbane should be happy with whatever happens this season, especially if they do make finals.

We value experiences through the lens of expectations. St Kilda would love to see an 11-11 season; Collingwood, at this point, would consider that a huge disappointment.

2: Besides the undefeated Collingwood team of 1929 (see no.18), there was a second team which for all intents and purposes went through the year undefeated in all meaningful games. In 2000, the Essendon Bombers were coming off an 18-win season that saw them fall before the grand final (a one-point upset to Carlton, 104-103, thanks to Anthony Koutoufides’ incredible fourth quarter), and start the new millennium with a chip on their shoulder.

They clinched the minor premiership with four games to go in the season, and after beating Carlton in a key 1v2 game in Round 20, took the opportunity to rest James Hird and Damian Hardwick, and relaxed in the fourth quarter to let the Western Bulldogs be the first team to win a game over the eventual premiers, 92-81.

Essendon went on to win another relaxed game over a bottom-four Collingwood squad in Round 22, then turned the jets on to defeat three finals opponents by a combined total of 230 points to leave no doubt as to their credentials.

3: Since their surprise minor premiership in 1996, the Sydney Swans have only missed finals three times. They were tenth in 2000, 11th in 2002, and 12th in 2009. They’re currently riding a nine-season finals streak (which is admittedly in danger), and all of this success comes after a stretch of three wooden spoons in 1992-94 and more spoons than finals appearances in the fifty years since their previous minor premiership in 1945. 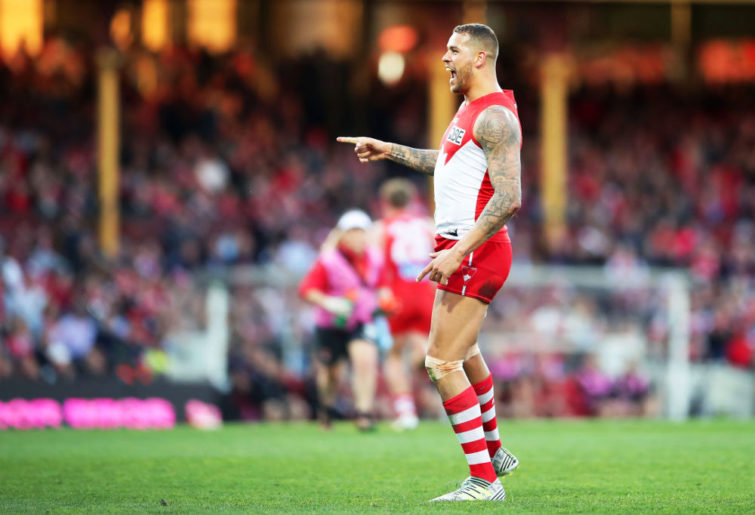 4: It wasn’t until their fourth season that St Kilda were awarded their first victory, and that only happened on appeal. After three straight 0-16 seasons, the Saints opened their season with what seemed to be a 68-68 draw with Melbourne.

However, on appeal, the VFL ruled that, because the third quarter siren sounded late, the behind Melbourne scored after the time the siren should have gone off was disallowed, giving the Saints a 68-67 victory. Graciously, Melbourne chose not to appeal the decision, despite having a good case, giving St Kilda their first official victory. However…

5: It wasn’t until their fifth season that the Saints won a game on the field, a 50-32 victory over Carlton in Round 12, 1901. Over the course of their first six seasons, St Kilda went a remarkable 2-88 with six spoons. It’s set the table for their record 27 last-place finishes over 121 seasons, outnumbering their finals’ appearances by one as of 2018.

6: It’s been six years since the minor premiers made it through September to win the grand final – the Hawthorn Hawks defeated Fremantle to win the first of their three-peat titles in 2013. In the five intervening seasons, the eventual champion came from second twice, third twice, and once…

7: The lowest finals seed to ever win the premiership, of course, was just three years ago. Coming in from seventh after a 14-8 season when six teams posted 16 wins or more, the Western Bulldogs put together four upset wins to win just the second title in Bulldogs history. 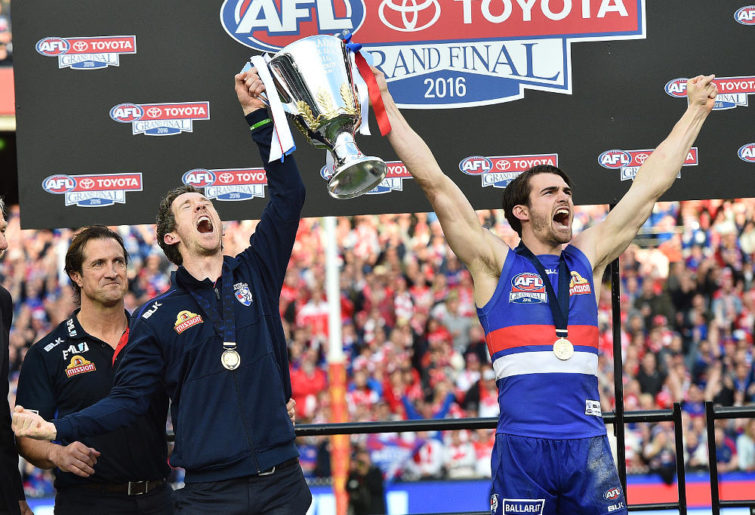 8: The first team to ever go ‘inactive’ didn’t exactly fold. Active for just eight seasons, University comprised students from Melbourne University, many of whom were either doctors or in the medical program. Despite their lack of success on the field – their best finish was sixth in 1910, and they went winless over the final two seasons (1913-14) – what pulled them out of the league was WWI, which demanded the attention of the medical personnel who made up the team. They reformed at the collegiate level to significantly higher levels of success.

Of course, they’ve won 13 minor premierships, including one the very first season in 1897, when they lost the title to Essendon. The last time they were minor premiers, in 2008, they were beaten by Hawthorn in the grand final. So don’t count any chickens just yet, Cats fans.

10: In their 33 prior seasons, the West Coast Eagles have only missed finals ten times – their 72 per cent success rate is far higher than the league average of 40 per cent, and the highest of every team in the league. Collingwood is second at 66 per cent, and Adelaide, Carlton, and Essendon are the only other teams with finals success rates over 50 per cent. (Gold Coast, of course, trails the field at 0 per cent.) 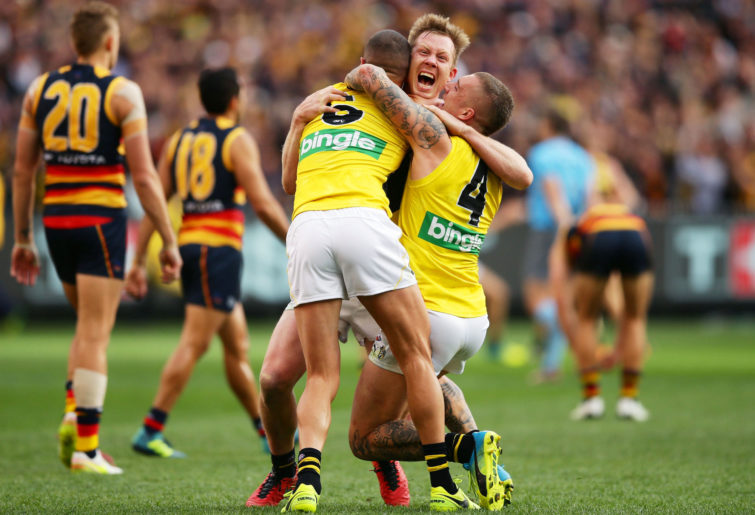 12: Only once (Hawthorn in 2013) in the last 12 years has the top seed gone into the last Saturday in September and won the premiership that afternoon. Geelong in ’07 and West Coast in ’06 did it in consecutive years, and then no minor premier won the grand final… well, Collingwood eventually did in 2010, but not on that last Saturday! It took a replay the following week to convince St Kilda to stand down.

13: Going into Round 13, four teams have surpassed their wins or losses total from the previous year. The first team to surpass either their win or loss total from 2018 was Brisbane, earning their fifth victory in Round 7 against Sydney.

Next came St Kilda, who defeated Carlton in Round 10 to go 5-5. Finally, last week our first two teams to surpass their loss total from last year appeared – Richmond were slaughtered by top-o-the-ladder Geelong, and Melbourne picked up loss number nine on Queen’s Birthday Monday. Of course, the Tigers lost fewer games than any other last year, so with their injuries it’s almost more surprising that it took until now to hit defeat number five.

14: In each of the last two years, Fremantle finished 14th. Coincidentally, in 2008 and 2009, the Dockers also placed 14th. In the following year, they made a leap up to sixth place and a berth in finals; over the next five years, they built up to a minor premiership in 2015. Will that happen to this edition of the Dockers? Only time will tell.

15: Collingwood have 15 titles, the most recent being the replayed grand final in 2010 over St Kilda. Although we think of the highly popular Magpies as being perennially successful, with more finals appearances than any other team, they’ve only won four premierships in the past 82 years, a significantly lower percentage than a random distribution would have given a team (on average, a team playing the last 82 years would expect five or six).

And because of that, the Pies no longer hold the record for most titles.

16: That would belong to two close rivals: Essendon and Carlton, which each hold 16 trophies. Carlton’s most recent was back in 1995, with seven more dating back to 1968. Essendon’s last title was the phenomenal 2000 team – the only team to ever win 24 games in one year – with three more in the previous two decades.

17: Over the first three years of its existence, the leading club in AFLW – the Adelaide Crows – have amassed 17 wins. That may not sound like a lot, but they’ve played a grand total of 24 games in the three seasons combined. Are seven-game seasons enough? Until the AFLW is able to pay them for something more than a two-month vacation from their regular careers, yes, unfortunately.

18: The 1929 Collingwood Magpies finished the home-and-away season 18-0, still the only footy team to finish a regular season undefeated. Because of the peculiarities of the finals set-up 90 years ago, the Magpies could afford to lose their first game during finals (a ‘semi-final’ rout by Richmond, 123-61), and still go straight to the grand final, where they beat that same club 79-50.

Without knowing more, I suspect that they knew the lack of importance that game held for them – otherwise, how does an undefeated team lose by 62 in a semi-final to a team they thumped twice during the season, and again in the grand final?

The Buffalo, the ELO-Following Football ratings, the percentage/home field system, and the odds makers all went three for six last week (missed on the home victories by Carlton, Adelaide, and Sydney). We all agree again this week, picking the Crows, Bombers, Saints, Dockers, Bulldogs, and Giants.

This age group of 24 to 26-year-olds was a tough one as there were so many midfielders in particular to choose from. Marcus Bontempelli was an easy choice as captain of this team, as was the vice-captain Lachie Neale. The team would be a difficult team to beat if there was an exhibition game played, […]