Australia currently face two problems they must overcome if they are to win the 2019 World Cup. Firstly, their batting depth has been fiercely challenged.

Our ability to finish innings off with some dynamic lower order hitting has been exposed. But a more critical challenge Australia are experiencing is their third seam bowling option.

Going into the World Cup, the selectors took a huge gamble. Selecting Mitchell Starc despite fitness concerns, they then chose the in-form Pat Cummins and Jhye Richardson, before opting to fly Jason Behrendorff and Nathan Coulter-Nile to England based on their white ball success.

One burning question surrounded the omission of metronome Josh Hazlewood, who found his groove at the right time in the 2015 World Cup to be a key reason for Australia’s wonderful bowling effort in the World Cup final.

Since that victory he has been as solid as a rock. When Starc has faltered, spraying the ball around and losing confidence, Hazlewood has remained steady. He has proven in England he can hit good lengths and will dry up the runs in one day cricket. So why wasn’t he selected? 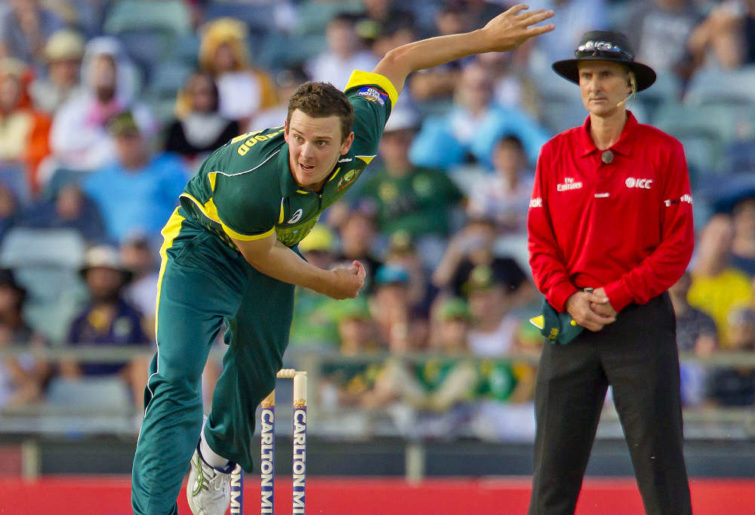 A bigger slap to the face came when Richardson hurt his shoulder, leaving the third pace bowling spot wide open. Surely Hazlewood would come in and build up his strength in order to challenge for that spot? Wrong.

He wasn’t even given a sniff, as the selectors instead flew Kane Richardson over based on his form with the Melbourne Renegades.

Here’s the problem with our choices. The three selections other than Starc and Cummins, who were always going to be shoo-ins for the side, have been based on Big Bash or previous Twenty-20 form.

Coulter-Nile has always been a favourite son of the selectors, and his return to BBL cricket meant his promise with both bat and ball had to be given the chance to flourish in England. Fair enough.

Behrendorff has always been handy, especially as an opening bowler. But when he got the chance to play for Australia he was never going to open the bowling.

So as a first-change bowler does he swing the ball? No. Does he seam it all over the place? No. Is he consistent in building up pressure? No. So why has he been selected, other than as a back up opening bowler?

Kane Richardson is the most baffling of selections. What does he do better than Hazlewood? Can he come in and tie down an end? Will he take regular wickets?

His death bowling is his strong suit, and that came in handy when Cummins was expensive against Sri Lanka. But when the opposition get away to a strong start, like they have against India, Pakistan and the West Indies, will he come in and stem the flow before taking important wickets?

So far he hasn’t looked likely. And it’s damaging Australia – the past few games have been scares for the Aussies because their bowling is lacking that third dimension. That third pace bowler who can make a genuine impact at any time of the game.

Hazlewood would have been perfect. He could have opened the bowling, relegating Cummins to first change.

Or he could’ve come in at first change and applied instant pressure. Ball hitting bat hard. Constant line and length. Some aggression.

But with him not in the squad, will this non-selection prove immensely costly for the Aussies come the business end of the World Cup, when batsmen are piling on the runs and the green and gold need the likes of Hazlewood to do a job?

From what we’ve seen so far, it appears we really need him.