The apology AFL fans needed, not the one we deserved

The heroes are all of us, represented by one loud-mouthed, but apparently not foul-mouthed Collingwood fan, and a Carlton fan known as Frankie. The villains, as always, were the AFL and Gillon McLachlan.

So let’s get a vague understanding of the whirlwind of contractions the collective AFL fanbase have enforced upon the rest of us in the last couple of weeks.

First, a loud Carlton supporter got removed from a match for calling an umpire a “bald-headed flog”.

To be extremely clear, he obviously said it rather loudly, or at least clearly, as the umpire in question was easily able to identify him.

Almost the entire AFL public took the side of the fan. It’s all part of the pantomime, we should be allowed the criticise umpires, they need to have a thick skin, and so on.

One said he had done nothing wrong, another disagreed. The majority heard what they wanted to hear and sided with the corresponding fan. But the damage was done – “Now we can’t ever support our team,” I hear you scream indignantly.

Then, on Saturday night, Channel Seven showed images of security walking up and down stairs at Marvel Stadium. And repeatedly showed the same footage of a Carlton fan supposedly being removed. There was no context for why and suddenly the narrative changed: we fans feel intimidated.

I’ll try to assess the collective opinion of the AFL fan: we should be allowed to say whatever we want to umpires and they should harden up. But we should not have to deal with the existence of security guards, because that is intimidating.

At the end of Saturday night’s game, a fight broke out in the crowd. Browse social media on this topic, and the majority think this was also the AFL’s fault – that security should have been stopping fights, rather than intimidating the crowd.

Of course, if we take our anti-AFL hat off for just a moment, we would realise it is impossible to know what is going on at a stadium that holds 50,000 people at all times.

So, put on more staff? No, there are too many, and that’s intimidating. Go back to the old amount? No, there were fights before they increased the number, and they need to be stopped. Okay, so have staff try to monitor crowd behaviour, to manage potential tension? No, we have to be allowed to barrack. 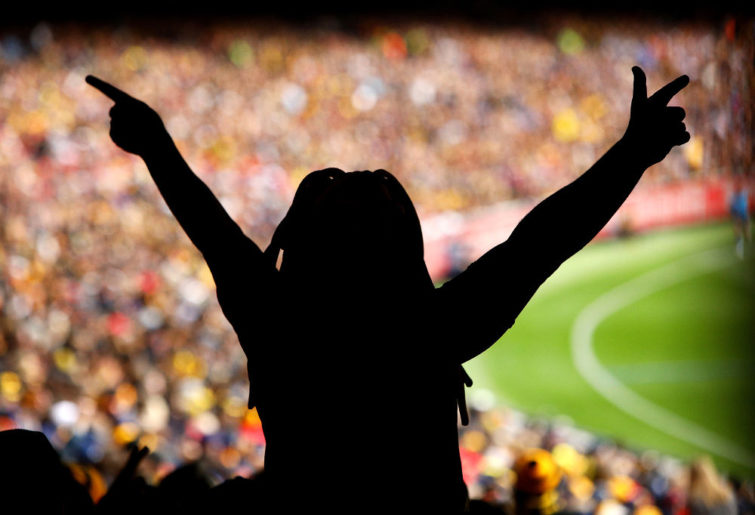 So, what can be done? Nothing, it would seem…

Having been to a lot of football matches, I can recognise a potential fight well before it occurs.

Standing room at GMHBA Stadium is a prime example. Two people will be trading banter throughout the course of a match, it slowly gets more aggressive, until eventually someone gets angry, and a fight breaks out.

However, when staff come over and have a quick word, or just place themselves in the area, the tension calms, and fights are less likely.

That is crowd management. It happens all the time.

What the collective fan psyche has created now is the perception that the presence of security staff is unnecessarily, wrong, or intimidating.

Whether we realise it or not, just about everything the AFL does is in the interest of fans. Yes, I mean that. If that was not true, it would not be the most popular sport in the country, by a distance.

Gillon McLachlan did not apologise because he should have, he apologised because the majority of AFL fans thought he should, based on their contradictory beliefs and a total misunderstanding of recent events.

The AFL were doing everything in their power to make going to the footy safe and enjoyable, but we all missed the point. So they apologised, to make us feel like they care about us, when their actions in the first place demonstrated exactly that.

It is absolutely mind-boggling none of us recognise this. Well, most of us anyway.

It will be the first time since 1952 that nobody’s playing a game at their own home ground, so what havoc that will wreak on our tipping this week gives me the shivers. We’ve got the Cats hosting the Lions at the SCG, the Eagles tackling the Crows at the Gabba, while the North Melbourne […]

This is who I think picked up the Brownlow votes the past two weeks.