As scores of amateur philosophers will incorrectly paraphrase, those who cannot remember the past are condemned to repeat it.

Whilst the wisdoms of 19th century Italian poets are seldom applicable to the brutal, organised car crash of Australian rules football, this year’s impending finals series is a true exception.

With the grand supremacy of Hawthorn’s three-peat a quickly fading memory, recent history has shown us to beware the dark horse, as the minor premiers and early favourites disappointed, while the underdogs delighted.

In 2016, it was the Bulldogs’ fairy-tale run from seventh to September. The following year, Richmond broke a 37-year drought in expectation-defying fashion, and just eight months ago, minus Nic Naitanui and Andrew Gaff, the Eagles overcame an early five-goal deficit to elevate Eddie McGuire’s blood pressure to near-fatal levels.

And now, with all 18 teams at their midpoint and the bye rounds to conclude, it represents the perfect vantage point to assess which dark horses are purebreds, set to pip the established threats at the post, and which are show-ponies, trotting out some lovely aesthetic qualities but lacking the grunt of a true challenger.

Most punters would tell you that Geelong, GWS, Collingwood and the defending Eagles are the only franchises worth entering your black book for premiership glory, but below you’ll find prospects that will make you ponder whether this brief era of unpredictability is over.

The Favourite: Adelaide (4th, 8-5, 115.1%)
The parochial Adelaideans would likely be miffed by the dark horse tag, but even their most ardent supporters wouldn’t have brazen confidence in their credentials.

Their start to the season lacked the scoring rhythm and overwhelming Adelaide Oval dominance that brought them to 2017 premiership favouritism, however with seven wins in their last nine outings, the engine of the hype train is beginning to slowly chug. 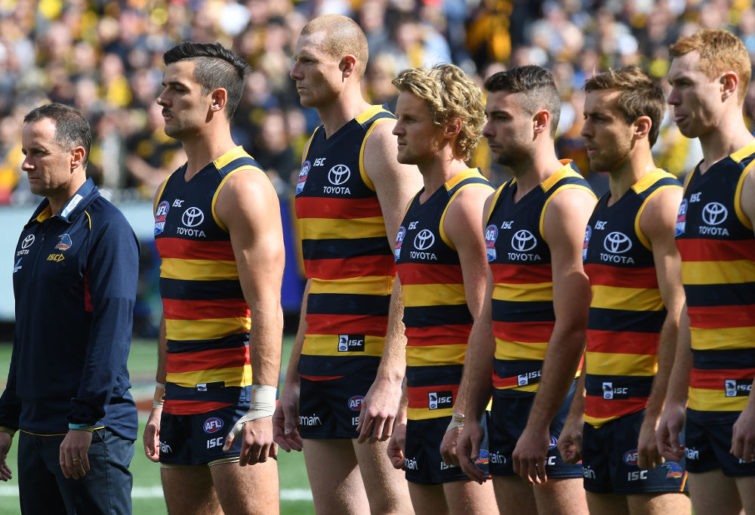 Will we see a return of the Power Ranger stance this September? (AAP Image/Julian Smith)

What would excite the “19th man” and neutral AFL punters alike are the dual turnarounds of Adelaide’s most important forwards. In the aforementioned nine-game stretch, Taylor Walker and Eddie Betts have kicked 19 and 20 goals respectively, they are a different team with these two inducing defensive headaches.

Six of their remaining nine games are against opponents outside the top eight, meaning the Crows are every chance to maintain their top four standing if current form continues. With Reilly O’Brien flourishing, Adelaide are one hypothetical upset away from a home prelim come late September.

This is a serious mover to watch.

The Smokey: Richmond (8th, 7-6, 92%)
As the narrative has been for months, beware the sleeping Tigers. Punt Road has suffered through a war of attrition this season but is yet to show signs of retreat from the dream of a second flag in three years.

The story of the Tigers’ ever-growing injury list undeniably a woeful one, however, the optimist in me wants to search beneath the sea of torn hamstrings and sore knees for a positive.

It isn’t entirely unrealistic to assume that in the coming month, following some karmic justice, the Tigers could welcome back David Astbury, Trent Cotchin, Shane Edwards, Toby Nankervis and Jack Riewoldt. All five were crucial cogs in the drought-breaking flag victory.

Three crushing losses heading into the bye has prompted widespread abandonment of the Tigers’ finals aspirations, but with a week off for a contemplative bye round followed by opportunities against St Kilda and Gold Coast, the whips may relent their cracking.

This is one beaten-up steed, but they may have a few more races in them yet. Keep the faith for now.

The Bolter: Fremantle (6th, 7-5, 110.7%)
Fremantle have surged from irrelevant to irresistible in the last few weeks, reversing their form slump of early season to overcome three top eight sides.

They boast two genuine superstars in Michael Walters and Nat Fyfe, with a growing cast of supporting characters continuing to compete for greater attention from All-Australian selectors. But as is often the case, form lies not in paper and names, but rather in cold and calculated numerical evidence. 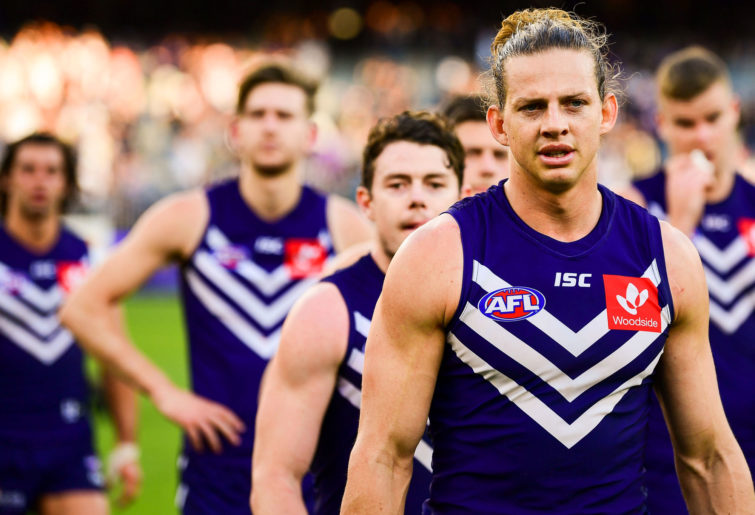 Both Fyfe and Fremantle have their eyes set on September. (Photo by Daniel Carson/AFL Media/Getty Images)

The Dockers’ renewed success can be illustrated through their position as second in the AFL for per game values in contested possessions (154.7), metres gained (5963.3m), and intercept possessions (76.9). This inside, outside and defensive prowess speaks to a wholesale improvement in their game style.

Repetitive and justified questions regarding the Dockers’ scoring deficiencies are slowly evaporating with an average of 24 scoring shots in the past three weeks. If big Jesse Hogan starts to get up and running, they can become a threat in every aspect of the game.

With five opponents in the next six weeks positioned outside the eight, top four isn’t out of the question for the men in purple. Predicting results on the basis of fixtures is foolhardy, however, it serves to illustrate a newfound confidence Fremantle are earning.

The Dockers are unpredictable and have already upset a few favourites. Keep an eye on this one.

It’s a scintillating victory one week and a bland loss the next. Port have been a will they/won’t they premiership contender for more than half a decade, finishing no lower than 10th but no higher than fifth since 2013.

It seems as though 2019 is a case of same story, different day, as despite the exciting injection of some exciting youth, the Power will continue to tease all of us.

Port are gagging for Charlie Dixon to return with Connor Rozee serving as their highest goal-kicker (15, 38th in the comp). His return to the SANFL inspires confidence. However, with the men in teal’s next month including games against the Cats, Crows and Lions, they’re going to need more than confidence.

Ken Hinkley’s Port Adelaide almost seem destined to be the bridesmaid and never the bride, but their inside dominance – first for contested possessions and clearances – guarantees that on their day, they’re more than capable of flexing their muscles, in particularly Ollie Wines’ otherworldly quadriceps.

The question remains whether they can do it against the best.

A perennial but maybe passing fancy. Would love to see them prove me wrong.

But they are, on their day, tricky. Is that enough? Probably not. Was it enough for the Bulldogs of ’16? You’re damn right.

I’m not silly, it’s going to be nigh on impossible for the Bombers to win with their current style and set-up, not to mention being without Joe Daniher for the remainder of the season.

They appear to lack identity. They have some defensive runners, some class through the middle and some dynamic forwards, but can’t seem to put it together all at once.

However, as the previous few years have shown, the greatest Cinderella stories come from unlikely sources. If John Worsfold can unlock some never-before-seen consistency from his troops, there is magic at his disposal.

But how come we don’t see them flying on a weekly basis?

Keep this one in your back pocket for a rainy day. Not a favourite, but could ruin one’s day.