Somebody needs to say it: you, AFL, are an appallingly inept organisation.

Jaidyn Stephenson was stupid. Nobody can dispute that. Rules on betting are clear. But a penalty of ten weeks, and a further 12 suspended, is a gross overreaction.

But why should we expect anything else from the AFL?

The Melbourne Football Club is repeatedly accused of tanking, but the AFL didn’t dare use the t-word, despite some baffling on-field moves and a period of prolonged poor performances and lots of murmurs. Until proof emerges that Melbourne did purposely tank, and the AFL do what? Well, the AFL do nothing at all.

The dilute the talent pool by introducing extra clubs, they saturate the season with games scheduled at bizarre times, they continue to champion an inequitable fixture, they change rules to attempt to improve aesthetics in the game they deem unpalatable, they mishandle the Adam Goodes situation and issue an apology years later, and even now, most recently, they beg innocence in ramped-up security at games where people are being reprimanded or tossed out for barracking.

It’s tantamount to watching the on-screen management of WWE. The difference is that in the WWE, the management usually gets their comeuppance. Not with the AFL. When you try to question them, when you try to hold them accountable, we get the old chestnut, “The game’s in good shape – look at the crowds.” 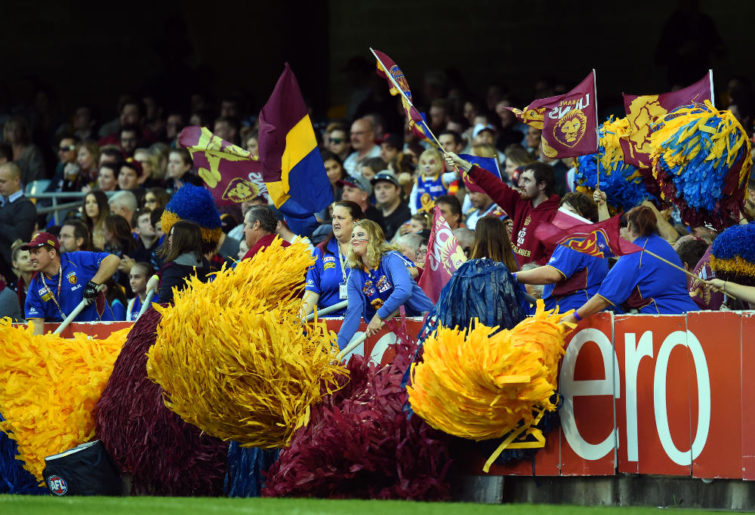 I’ve followed the game for 40 years. I followed it because I was drawn to the actual game itself – the act of kicking the ball, of marking it, of winning the contest. I didn’t know anything about politics, or why rules needed tweaking, or bombastic media coverage that feels every second of a footballer’s life should be available for public consumption.

For me, it was simple: get the ball and kick it. Emulate my heroes. Play in a team and beat our opposition. Come the end of the week, cheer my team, cheer against the opposition.

But as I grew older and lost that naivety, I could consume the game on all those different levels and see what a fractured mosaic it is, like somebody dropped it years ago and never put it back together quite right.

What holds me to it (tenuously now) is my dedication to my team. I don’t think I’ve agreed with a single thing the AFL has done for over a decade – the last change I agreed to was allowing a player to kick from straight in front if he marked in the goal square. Wow! Some logic.

The rest has just been ridiculous posturing that nobody’s asked for, and which continues to distort the game and alienate it from its fan-base.

The penalty imposed on Jaidyn Stephenson is as ridiculous as most things the AFL do. The kid self-reports. I shudder to think what the penalty would’ve been if he hadn’t. But they whack him anyway. Ten weeks. Meanwhile, watching a game on TV involves being inundated with Sportsbet ads where Nathan Brown espouses all the new enticements to gamble.

Cultivate in your audience – in the very kids you’re claiming to nurture into the next generation to grow the game – that gambling is good, that there are no real losses now (because of all those qualifications Nathan Brown spouts about your team being in front at the breaks, blah blah).

Inculcate your audiences to the symbiotic relationship gambling now shares with the AFL, given we get odds on games, premiership favourites, who’ll win the Brownlow, the list goes on. It must be good given the pervasiveness of its promotion.

Jaidyn Stephenson did a stupid thing. He tried to make it right by self-reporting. And the AFL smashed him.

Here’s the lesson for all you out there: deny everything for as long as you can.

In the long run, it’ll work out much better for you.