Australia’s second-biggest ever score at the Cricket World Cup has powered them past a gallant Bangladesh at Trent Bridge, all but locking up a semi-final spot.

Australia will need everything to go wrong, including losing all three of their remaining group games and having Bangladesh beat India to miss the semi-finals from this point.

On a slow and at times two-paced pitch in Nottingham, Aaron Finch won his first toss of the tournament and immediately elected to bat first. Not for the first time, it was he and David Warner who set the platform for the men in canary yellow.

The Aussies began their assault slowly and methodically, as they have done right throughout the tournament. While there was the odd big shot from Finch, they went to the first drinks break after 17 overs with one hundred on the board for no loss.

It was clear there was going to be runs in the pitch, with Bangladesh’s bowling attack struggling to penetrate with the new ball or to generate any spin at all.

Finch would be the first man out with the score on 121 in the 21st over on what was an absolute dolly dismissal, before Usman Khawaja took over. Khawaja batted with Warner all the way until the 36th over, at which point Australia found themselves on 212, with Warner having just gone past his century from 110 balls.

From there though, it was a mixture of big hitting and Bangladesh losing the radar. There was some woeful bowling, as Warner scored his final 66 runs from just 37 balls, rediscovering some of the aggressive touch he has been lacking throughout the tournament. 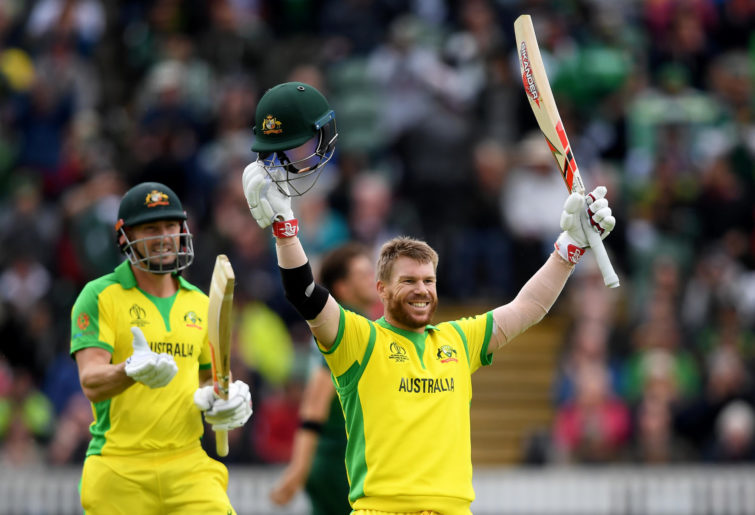 Warner eventually fell for 166 from 147, but he and Khawaja had put on 192 for the second wicket, at which point Glenn Maxwell came to the crease.

He went crazy, scoring 32 off 9 balls before being run out on a flick to short fine leg. It was a dismal mix up between he and Khawaja, who to that point had refused to take risks batting, and it may well have cost Australia double figures worth of runs at the back end.

From there, Marcus Stoinis and Alex Carey both struggled to get going, before the players were brought from the field due to rain with an over to go. Carey and Stoinis scored 13 upon resumption though, taking Australia to 381.

In reply, Bangladesh wasted no time in getting off to a strong start, more or less matching Australia in the runs department all the way through to the 35th over.

The Tigers, like other teams, simply wanted to target every bowler whose name wasn’t Pat Cummins or Mitchell Starc, and it worked with varying levels of success.

They lost Soumya Sarkar (who had taken three wickets earlier), but by the end of the first powerplay, Shakib Al Hasan was starting to look good alongside Tamim Iqbal with 53 runs on the board.

Despite that, the duo would perish shortly afterwards, and there was still the feeling Australia were well ahead in the game thanks to the onslaught which saw them make 159 runs in the last 14 overs.

Mushfiqur Rahim worked hard to hold things together alongside Mahmudullah, with the duo giving the Tigers some late hope of doing the seemingly impossible, but some controlled bowling from Mitchell Starc, Pat Cummins and Marcus Stoinis ensured they wouldn’t end up getting close, with the game realistically over well before the actual finish.

Australia now get set to take on England next Tuesday, while Bangladesh play a must-win game against Afghanistan on Monday.