This is the end: Rugby’s Nations Championship abandoned

Over the last few months, rugby – careering through its first 25 years as a professional sport – found it had arrived at a crossroads.

On one path, a £500 million bid to acquire a 30 per cent holding in the Six Nations from CVC Capital Partners, which would effectively ring-fence that competition and reaffirm the status and commercial presence of the three major northern hemisphere club leagues.

On the other path, a 12-year £6.1 billion guarantee from leading sports marketing agency Infront Sports and Media, backed by Hong Kong-based parent company Wanda Sports, where ownership of a new Nations Championship would have been retained by the world’s national unions and World Rugby, without any sale of equity in the game.

With World Rugby decreeing the Nations Championship viable only upon unanimous acceptance of all of its member unions, power and responsibility in the decision-making process invariably settled upon Ireland, Scotland and Italy.

It is now apparent that sticking points emerged as to division of the spoils. That these nations have ultimately chosen to feather their own nest should come as no surprise – self-interest is Sports Administration 101, and why should rugby be any different?

It is true that the Six Nations competition – first played in 1882 – is not in need of tinkering with. It is also unremarkable that administrators charged with running rugby in these nations have taken no chances when it comes to securing the future of their constituencies.

The year 2035 might seem like a long way off, and the prospect of Ireland diminishing as a rugby power to the point where they might be relegated from the first division of rugby nations seem ridiculous, but why even risk having that as your legacy?

No matter the justification – and the incongruity that a rent-seeking, geographically blessed Italy, having achieved little in their history by way of rugby outcomes can determine the future of other traditional rugby super powers – two outcomes seem assured.

And secondly, the primacy of international rugby over club rugby will be eroded even further, with the leading club competitions set to reap huge commercial benefit, initially from reinforcement of the status quo, followed by revaluation of its competitions, not to mention an accelerating influx of the southern hemisphere’s best players.

What was a crossroads is now a busy six-lane highway heading north, an attractive, newly-widened arterial route to Japan, and to the south, a dead end.

How the SANZAAR unions react will be fascinating to observe.

Anticipated funding from the World Rugby/Infront deal would have bought them time and also provided them with the financial means to keep their best players at home, and with it, the capacity to maintain the quality and integrity of Super Rugby as a leading rugby competition. 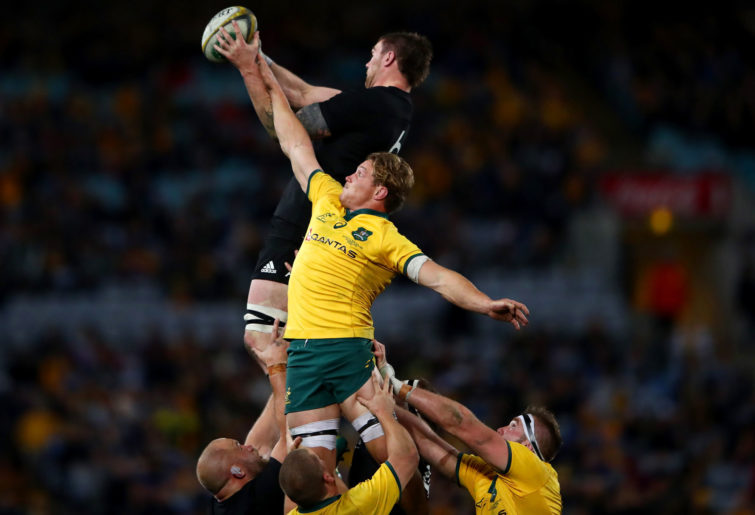 The next TV deal will be crucial to NZ and Australia. (Photo by Cameron Spencer/Getty Images)

With that deal now off the table and a new round of negotiations for broadcasting rights gathering pace, Rugby Australia and NZ Rugby are about to find out exactly how much money they will have at their disposal for the next five years.

As a bargaining chip, they will point to a more competitive and interesting Super Rugby competition in 2019, which has come about because they listened and acted upon the requests made by broadcasters.

But there are many more downwards pressures than they have chips. South African broadcaster Supersport will point to weakening fan interest and no local team with a home final, thus no match to show live in their prime viewing time. Australia’s Fox Sports is going through a cost-cutting and rationalisation process at exactly the wrong time for rugby. And New Zealand, too, is suffering from fan fatigue and general dispirit about the health of the game at the grassroots level.

Increased competition and fragmentation of broadcasting revenue via the emergence of digital and social media channels is a potential blessing, but – here’s the rub – even if SANZAAR were somehow able to collectively negotiate an increase in their funding, the quantum of that funding would pale into insignificance relative to the increasing amounts of money flowing into the game in the UK, France and Japan.

Hopeful fans waiting for UK and French clubs to collapse shouldn’t hold their breath. Clubs continue to be underwritten – either as the vanity projects of wealthy owners or via the conversion of debt to equity – all in the name of attracting the best players and paying them ever-increasing salaries.

And it is, of course, the world’s best players who are the big winners from this battle. Not because of spurious player welfare concerns that were never a real issue, but because we know from other professional sports that the vast majority of wealth generated by those codes ends up in the pockets of players and their managers.

Over the coming years, we will almost certainly see a readjustment in player movement trends.

It’s happening already, but the moment New Zealand and Australia concede to picking their Test sides from all domiciles, the best players will move accordingly into the richest leagues – the English Premiership, France’s Top 14 and parts of the Pro 14 – with corresponding adjustments in the next tier – Pro 14 and Japan’s Top League – with some displaced players shuffling back into whatever is left of professional rugby in Australasia.

Because it is South Africa where the player drain has already reached a tipping point, it is they who will determine SANZAAR’s relevance and future.

They are now in a position whereby they can honour their historic alliance with New Zealand by retaining the Rugby Championship – this relationship is important to both countries – while at the same time, continue to bail from Super Rugby, as many of their fans have done. 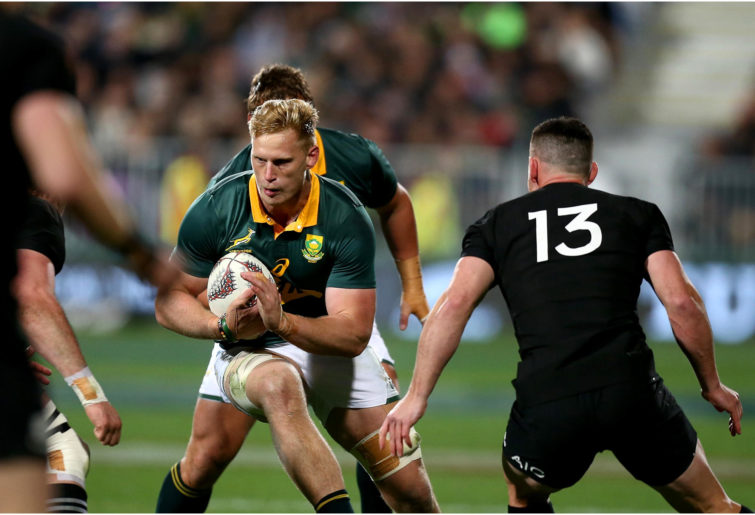 Because of the position in the broadcast cycle, it is reasonable to expect the SANZAAR nations to battle on for the foreseeable future. But almost certainly, they will need to urgently rejig their financial models and re-establish at what level and to what extent rugby in this part of the world can operate professionally.

It was interesting to note a difference in tone by the respective CEOs of New Zealand and Australia, Steve Tew and Raelene Castle, in the reaction to World Rugby’s announcement.

“Disappointed but not surprised,” was Tew’s official reaction, adding that, “SANZAAR would now go back to the broadcasters with their original product offering around the Rugby Championship and Super Rugby.”

Castle meanwhile, said, “While these discussions have been happening at World Rugby level, we have had a Rugby Australia project group working extensively in parallel with our SANZAAR partners on the Rugby Championship and other international opportunities for the next broadcast cycle. We look forward to continuing our detailed work on this and continuing our positive discussions with our broadcasters.”

Tew has been a fine soldier of the game in New Zealand with respect to battling against the commercial odds. But with a foot out the door and a retiring eye towards Central Otago’s golf courses and Pinot Noir, “original product offering” sounds tired, uninspired and – dare I say it – defeated.

By comparison, Castle’s comments imply that Australia is further down the contingency path, and offer more hope. Australian rugby can only trust that this is borne from substance rather than exuberance.

One potentially positive outcome is that it will probably be a trigger for both administrations to return to a more grassroots-based focus, even if that’s on reduced revenues and for the reason that much of their professional player development and management will be abdicated to Japan, France and the UK.

Unquestionably, the jobs of the next All Blacks and Wallabies coaches will be made much harder. But even if New Zealand’s incredibly successful model of stage-managing their professional rugby competitions to ensure the success of the All Blacks is compromised beyond recognition, what is important is how quickly they recognize this and transition to a new professional model that retains their competitiveness at the very top level, while simultaneously replenishing a damaged amateur game.

For Australia’s part, potential domestic solutions seem crippled by chronic parochialism and lack of money. But ultimately, the game here will have no choice but to cut its cloth according to whatever funds it has at its disposal.

If a domestic professional competition, such as the NRC or any new hybrid franchise/club model, that pays Australia’s leading players to train and play as true professionals is unsustainable today, then, it will be unsustainable in the future in the wake of this announcement, barring a miracle.

In that context, a consensus and commercial arrangement with Andrew Forrest re-emerges as a potential outcome that makes more sense outside of SANZAAR than it did within SANZAAR – albeit without Australia’s best players. 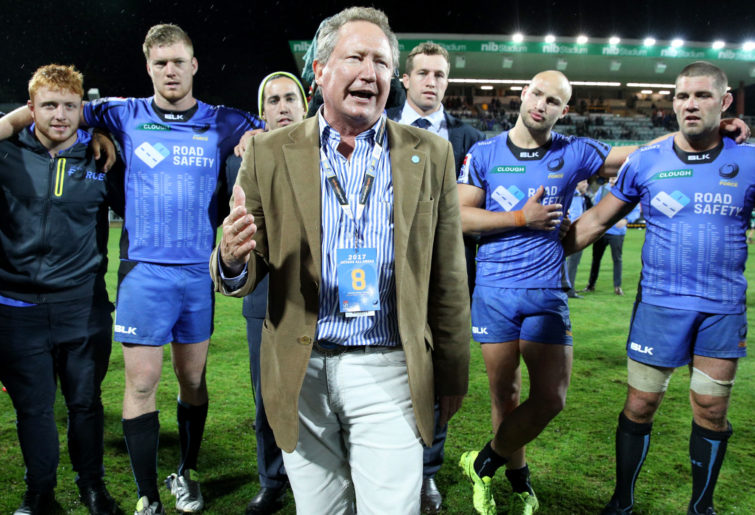 Will we be seeing more of Twiggy? (AAP Image/Richard Wainwright)

The statement from NZ Rugby also acknowledged the work of World Rugby, firstly in bringing an enticing proposal to the table, and for trying to reach consensus with all member nations.

Rugby’s history is not exactly littered with examples of men of the north taking up cudgels on behalf of rugby nations of the south, but World Rugby chairman, Englishman Bill Beaumont, has continued to advocate for rugby’s greater good. The failure of this project is not his personal failure.

But it is failure nevertheless, and World Rugby will have to find another way, on another day, to convince some member countries that accelerated development of the game in second-tier nations like Fiji, Japan and Georgia is a worthy objective, no matter how small and how heavily mitigated the risk to themselves.

Is it over-dramatising the situation to consider this New Zealand and Australian rugby’s Apocalypse Now moment? A messy war fought on two fronts, between north and south, and club and country? Like most wars, ultimately senseless and deleterious beyond the point of purposeful gain?

I fear not. For Martin Sheen’s Captain Benjamin Willard, hallucinating alone under a Saigon hotel ceiling fan, insert New Zealand or Australian rugby, slowly coming to the realisation that this is a war that cannot be won.

There are choppers cutting their way through a napalm-laden haze to the strains of Jim Morrison. This is not The End of rugby in New Zealand and Australia but, almost certainly, it is the beginning of the end of professional rugby as we have come to know it.