Four talking points from AFL Round 14

Round 14 is over, and like most AFL teams, I’m limping through till the end of the bye rounds. This week’s column is a little bit shorter than most, which might have to do with a certain prominent northern states event happening later tonight. Hopefully, you enjoy this week’s talking points all the same.

Geelong blow it after the bye… again
It would have come as a massive surprise if it wasn’t so incredibly predictable: on Saturday night, the Geelong Cats, coming off the bye, suffered a slow start and were never able to recover, copping their second loss of the year.

This is a team whose only other defeat in 2019 has been by four points to a fellow top-four side, GWS. To put it in kind of a silly way, this weekend’s 11-point loss represents a 375 per cent increase on their total losing margin for season 2019, 14 rounds in.

Just quickly: no credit should be taken away from Port here. Ken Hinkley was brave to swing the axe at the selection table and it paid off. They’re a reasonably good side who’ve added a great scalp and deserve to be very happy with themselves.

Still, it’s hopefully not too reductionist to suggest that this one might really be as simple as Geelong still not knowing how to navigate the bye. And that’s something that should worry them in a season where nothing else so far really has.

In the three-and-a-half years since a pre-finals bye was introduced, Geelong have had eight matches played after a bye round (either mid-season, pre-finals or mid-finals), and they have lost seven of those. That’s over a period of time where they’ve won more AFL matches than any other side.

Most concerning, three of those seven post-bye losses have come in finals matches, with two of those proving enough to eliminate them from the premiership race (against Sydney in 2016, and Melbourne last year).

Their only post-bye win during this era was a 2-point qualifying final victory over Hawthorn, which only came after Isaac Smith missed a shot after the siren.

Port aside, the only teams who have really tested the Cats this year are GWS and Collingwood, sides both known for their extreme depth of midfield talent.

So what happens if it’s one of those teams up against them coming off a week’s rest in the qualifying final – or, if they win that, a prelim? 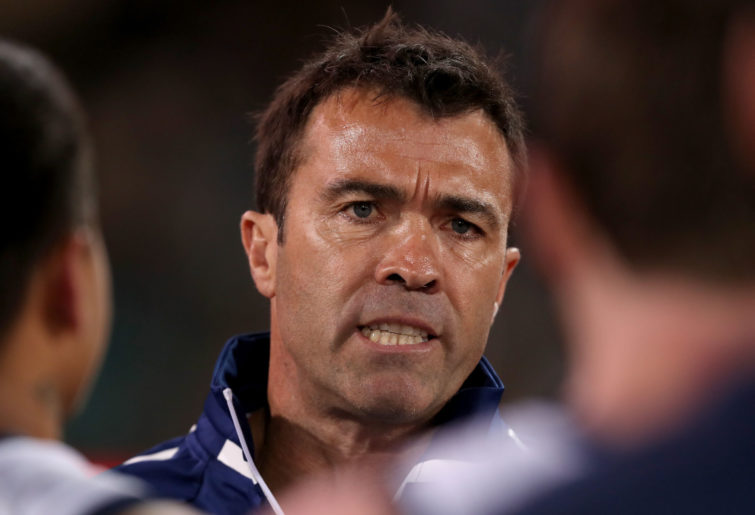 St Kilda’s week of good news ends poorly
There were three really good pieces of news filtering through for St Kilda fans this week. Arguably four, depending on your perspective.

The first one – that arguable one – was that Max King’s injury scare in the VFL last weekend was not an ACL injury. Sure, ok, it turns out instead he needs season-ending ankle surgery, which is not a whole lot better, but at least this way he’s not copping two knee recos before his AFL debut.

More unambiguously positive was both Jake Carlisle and Dan Hannebery being cleared to play their first games for the season, and in the case of Hannebery, his first for the club. He was in good touch too in his first game back at the level – but more on that soon.

The final piece though is that Jack Billings recommitted to the club for another two years, taking him through until free agency. That solidifies what’s been a career-changing season for him, and has to give Saints fans a bit of faith that things are going in an upward direction.

Unfortunately, their performance on Saturday against the Brisbane Lions did much the opposite. Overall you could argue they played three quarters of reasonably passable footy, but the third, where they conceded nine goals and scored just one their own, was devastating.

Nick Hind kicked three goals in just his second AFL game, Josh Battle made a strong case again that he deserves a Rising Star nomination – and most importantly, the $800,000 man Hannebery not only got through the match but collected an impressive 27 disposals.

Still, the scoreboard didn’t make for pretty reading, and that’s the metric most headlines are written on. What could have been a really great week for the Saints is middling at best. 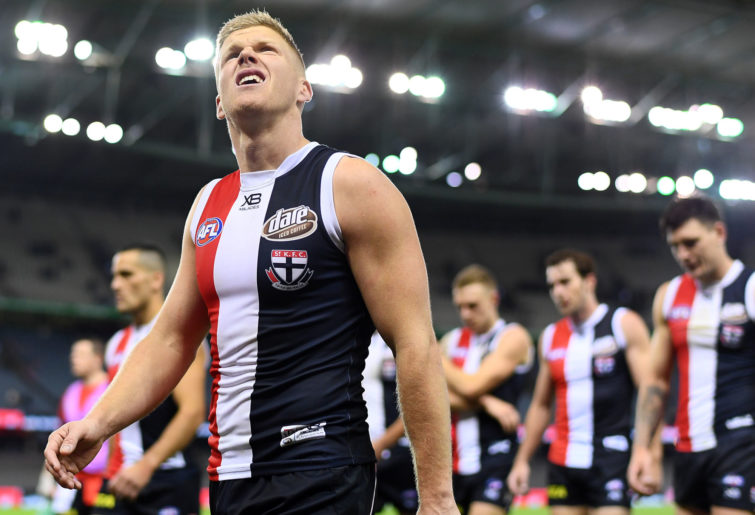 Hawks between a rock and a hard place
There’s still nine matches left in the season for each team so for a side like Hawthorn not sitting too far outside the eight, it’s too early yet to say that there’s no chance of them making it in, even if it’s looking unlikely.

What it’s not too early to say is that even if they do somehow make it in, they won’t be difference makers in the business end of the year. This team simply isn’t good enough for that.

Why? The simple explanation is that they just don’t have the cattle to be that good right now. The Brownlow Medallist is on the pine, as is Chad Wingard, and while Tom Scully still runs a lot he doesn’t do much else just yet.

Jarryd Roughead came back to AFL level which is nice, but didn’t really do anything to suggest his career won’t end in nine weeks time. He could be right back to the VFL next week and out-of-form Paul Puopolo might join him.

Hawthorn’s one genuinely elite performer who isn’t an old codger is James Sicily, and he’s being played out of position. I don’t mind the experiment – he was drafted as a forward – but it’s really hamstringing the club’s on-field performances.

Alastair Clarkson has said his side is in the process of building towards being a premiership contender again and that he’s looking to get them there before his contract runs out in 2022. Going to the draft is what they should probably do, but it doesn’t fit on that timeline, or with the decisions they made last year.

The Hawks built a generation of success through aggressively trading for players to fill their needs, but when they did it was based on a solid platform of quality draft picks, in 2001 (Luke Hodge, Sam Mitchell) and 2004 (Roughead, Lance Franklin, Jordan Lewis) particularly.

They have no such platform to work from this time, and to bust out a biblical metaphor, it’s like building your house on sand rather than rock. Not working out great.

Dreary Dons should have Worsfold worried
A 35-point loss isn’t a great result generally, but the margin if anything flattered Essendon on Thursday night as a team who had recently been touting the strength of their defence conceded 36 scoring shots to the West Coast Eagles and were ultimately lucky to see 22 of them become behinds.

The Eagles had two-and-a-quarter times as many scores as their opponents – if they had the same accuracy rate as them, they’d have scored 160 and won by 89 points.

Any progress we thought Essendon had made over the past few weeks – and really, the results they’ve had don’t justify thinking there was any large amount of it – was quickly wiped away. The club feels right back where it was in Round 1 this year, or in their 2018 malaise, for that matter.

As said with regards to Hawthorn, it’s far too early to say a side with a record like this can’t play finals this year. They’re 6-7 and that could easily be a launching pad to sneak in if a few things go right in the second half of the year. But, like Hawthorn, it’s hard to imagine them making a meaningful contribution to September if they do.

And, again like the Hawks, they’re a club that’s been aggressive at the trade table in recent years, seeking mature talent to hasten a rise up the ladder.

It’s yet to work for them. Announcing a big signing is a surefire way to make fans happy in October, but boy does it rachet up the pressure if the next season rolls around and bringing in a big name doesn’t translate to the team’s improvement.

Who is to blame when that happens – were they poor trade targets, or is it the coach who has failed to turn that boon of talent into improved peformance? In the case of Essendon, as much as I have great respect for John Worsfold, it feels like the latter.

Devon Smith, Jake Stringer, Adam Saad and Dylan Shiel have all played good footy for the club, in fact probably all of them have played the best footy of their careers in red and black or close to, discounting Stringer’s All Australian 2015 season.

So the recruits are firing but the team isn’t. What does that say about the coach? A topic perhaps needing more time than we have here, but to put it short, I’ll be surprised if he’s still leading the club in Round 1 2020.

Everbody gets a turn
Brisbane Lions (8-5) – Michael Walters pretty much has that All Australian small forward slot sewn up – is Charlie Cameron next in line for one? Set to smash his previous career-high 29 goals.

Collingwood Magpies (10-3) – Second on the ladder and surely one of the Cats’ closest rivals for the flags – but have they really been all that impressive lately?

Essendon Bombers (6-7) – Darcy Parish is becoming a really interesting question for the Dons lately. Has been in great form, out of contract this year.

Fremantle Dockers (7-6) – You’re telling me that in a match featuring Melbourne one team lead for most of the game, lost it late, and that team wasn’t actually Melbourne? Poor Freo – that almost never happens.

Geelong Cats (11-2) – Jordan Clark is one of those players who surely needs to get a Rising Star nomination sometimes soon. Doesn’t star, but plays his role every week. That’d make three in a year for Geelong where they’re also top of the ladder.

Hawthorn Hawks (5-8) – Jack Gunston’s goal before the final break was one of the stranger ones I can recall seeing. One of the highlights of the round.

Melbourne Demons (4-9) – The entire organisation would be wishing him well, but Melbourne are quietly a bit lucky that Jesse Hogan’s had an indifferent season for Freo so far in 2019. If not, we’d be talking a lot more about that trade.

Port Adelaide Power (7-6) – Tom Rockliff to potentially come back in next week alongside Paddy Ryder, Justin Westhoff and Sam Powell-Pepper who were all dropped – all fighting for spots in a team that just beat the flag favourites. Gotta like it.

St Kilda Saints (6-7) – Are we really going to go through season 2019 with Nick Coffield only playing one game for the year? Surely it’s time.

Sydney Swans (5-8) – Buddy Franklin injured his hamstring on Friday night. I injured mine on Saturday morning. Are we the same person? The answer is yes.

West Coast Eagles (9-4) – Dom Sheed loves kicking great goals. Well, I suppose every player does, but he’s the one who keeps managing it.

Western Bulldogs (5-8) – If you don’t love Caleb Daniel, do you really love footy? No. No you don’t.