Buddy, Roughy, still valuable as ever

On September 28, 2013, Hawthorn’s Buddy Franklin and Jarryd Roughead played their last game together as teammates.

The duo was part of Hawthorn’s 13-point victory over Fremantle, claiming the premiership in front of over 100,000 fans at the MCG.

They kicked three goals between them.

It has been an eventful five and a half years since that last Saturday in September 2013; their careers taking two different, yet equally brilliant paths.

Shortly after the 2013 premiership, Buddy accepted a mega nine-year, $10 million deal with the Sydney Swans and left his partner in crime, Roughy, and fellow Hawthorn teammates in Melbourne.

They met on the same stage 12 months later, this time on opposing teams, as Hawthorn defeated Sydney in the 2014 grand final.

Roughy and the Hawks did it again in 2015, while in 2016 Buddy and his Swans once again fell at the final hurdle, in a grand final defeat to the Western Bulldogs. 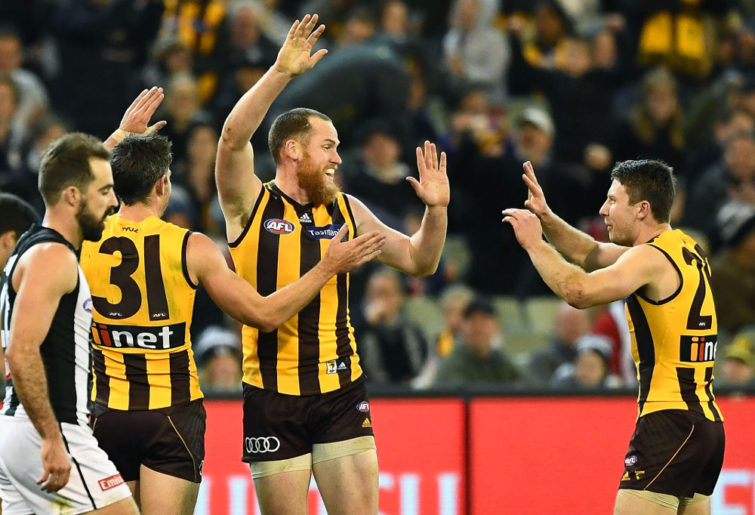 They have both faced their own health challenges.

On the eve of the 2015 final series, Franklin stepped away from football to prioritise his mental health, which he said had been “an issue for a little while”.

Franklin’s mental health issues coincided with Roughy’s cancer diagnoses, which saw him step away from the game for the entire 2016 season.

Despite the challenges faced by the pair, who both turned 32 earlier this year, there has also been plenty of success.

Six premierships, ten All Australians and five Coleman medals between them… just to name a few.

And they are two household names that will be remembered and celebrated for decades to come.

With every new season, the pair face a different fate and different circumstances to navigate through.

2019 has brought a new set of challenges that has left the pair, their fans and the football world questioning where to from here for Buddy and Roughy?

This issue is not necessarily that of each player, but the clubs themselves.

Each club has enjoyed an era of sustained success that appears to be coming to an end… for now anyway.

For the first time in a very long time, both the Swans and Hawks are facing the very real possibility of a list cleanout and rebuild.

So what does that mean for Buddy and Roughy?

It started with Buddy earlier this year, when Collingwood legend Tony Shaw suggested that the Swans should look to trade the superstar forward to a third club, as he believes the premiership window for both parties is closing.

Then it was Roughy’s turn, with Gold Coast Suns coach Stuart Dew all but confirming his club is trying to lure the former Hawthorn captain up to Queensland.

While it would most likely be in a mentoring role, that doesn’t make it any less a big story. Just ask former Hawthorn teammate turned Brisbane Lions defender Luke Hodge.

The constant commentary and speculation surrounding the two men is all well and good and even somewhat expected due to the media saturation in our game.

But the thing is, both are still key players and contributors to their clubs, even if it is in a different capacity.

They proved that on Friday night.

Despite his injury concerns, we all know his capability and that he is still a superstar of the competition.

Players may lose their fitness and slow down with age, but they never lose their talent.

On Friday night, he kicked four first-half goals before suffering a hamstring injury against his old side.

And that’s been the tale of his season so far.

He’s still got the wow factor and is still having a major impact on games but he’s suffered a couple of injury hiccups along the way.

He’s bagged 23 goals from nine appearances in 2019, proving he is still as capable and as important as ever.

It’s his spark that Sydney still needs to inspire them to victory.

On Friday night, he started what the next generation managed to finish and while they are still in that transitioning period, it’s clear that they still need him on their side.

At the other end, Roughy didn’t have as much of an impact, but as all true leaders do, he stood up in a couple of big moments. His one goal came late in the second quarter to bring Hawthorn back to within seven points at the main change.

He also had three tackles and five one-percenters for the evening, taking on a pressure forward role. He adapted to fit the team’s requirements.

But Roughy’s importance to the Hawks shone through well ahead of the round 14 clash, in his interview with AFL360.

Last Tuesday night he spoke candidly about his form in 2019, particularly about being dropped following round seven.

“Everyone asks are you angry or are you sad? We’ve had our careers. I feel more sad for someone like Paddy McCartin going through what he is going through,” he said to hosts Mark Robinson and Gerard Whateley.

“Now us, as a footy collective, have been robbed of seeing a No. 1 draft pick go at it. When you put it into perspective like that, us playing VFL for half a year doesn’t really matter.”

His ability to view the situation and comment on it as if he were an outsider, rather than in it himself is invaluable to the club and truly reflects the selfless character that he is.

Putting the club’s needs before his own will not only fast track their unofficial “rebuild”, but he’s using it as motivation to improve his own game and compete for a spot back in the senior side.

Jarryd Roughead and Buddy Franklin will forever be two greats of our game.

And they are still very much-required figures at their respective clubs, albeit in a different capacity.

Their talent and leadership is still second to none.

We should be embracing their strengths and how they execute them in different roles at their clubs.

Buddy may only manage two thirds of a season due to injury, but when he’s on, he is still the most dangerous forward in the game.

Roughy is still vital in those key moments in play and as a Hawthorn leader, he can inspire others to step up and take the reigns.

While we’ve still got them, we should enjoy them and celebrate them.

When the frenzied media speculation on the future of free agent Stephan Coniglio ended abruptly with his re-signing at GWS, Hawthorn largely receded from the spotlight for the 2019 trade and draft period.

Hawthorn are set to lure another No.1 AFL draft pick away from GWS with key forward Jonathon Patton declaring he wants to be traded to the Hawks.