State of Origin 2 took place on Sunday night in front of a record crowd of 59,721 at Perth’s Optus Stadium. Despite steady rain affecting most of the game, the New South Wales Blues dominated Queensland to level the series at one win apiece.

Queensland won Game 1 in Brisbane 18-14 despite going into the match as considerable underdogs. New South Wales rang in the changes for Game 2, replacing seven players in total, which effectively saw both sides at equal money to win the match.

However the Blues got off to a quick start and lead 18-6 at halftime, before continuing the onslaught in the second half to win 38-6.

The biggest talking point from the game though came in the 13th minute when Will Chambers was awarded Queensland’s sole try for the match, albeit via a penalty try.

Ben Hunt grubbered the ball into the Blues in-goal, with Will Chambers the only Maroons player chasing through. In his pursuit of the ball and a potential four-pointer, he was clearly pushed off his line, just enough, by Jack Wighton, causing Chambers to stumble briefly, before regaining his feet and making a lunge at the ball, however it just beat him across the dead ball line.

The video referee was called to adjudicate on a potential penalty try and it was awarded.

This has divided fans – mostly by the border divide.

However it does raise a growing trend in the NRL – of referees and the bunker awarding penalty tries.

Penalty tries were seldom seen in the first century of Premiership football, but in the last several years, it feels like we see a penalty try awarded on a near weekly basis. Sometimes they irrefutably correct. Sometimes there’s a lot of conjecture.

As for this try by Chambers, it was ruled that, had he not been bumped off his line by Wighton and knocked off balance briefly, then he would’ve got to the ball before it went to dead and thus scored. 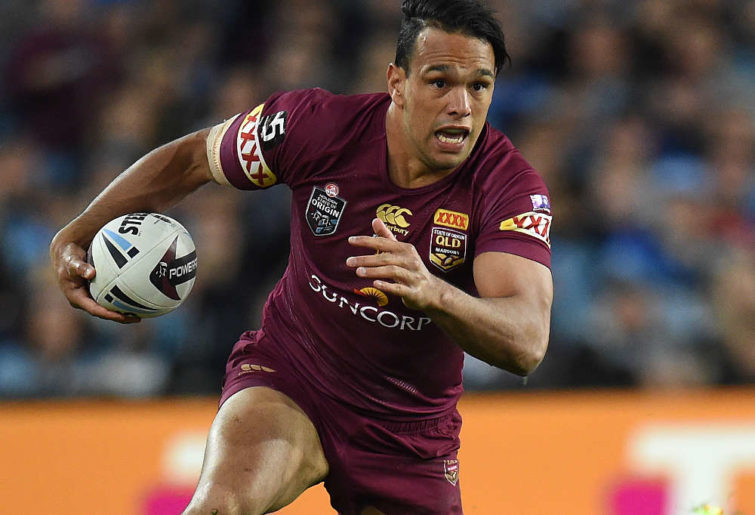 Herein lies the problem. Yes I agree that he would’ve got to the ball on time, however we have no idea whether he would’ve regathered the ball and scored cleanly. This is a doubt that should be taken into account when determining whether a penalty try should be awarded or not.

If Chambers was carrying the ball and was fouled in the process of scoring the try, then I have no issue with that being awarded, as the illegal act has changed what would normally be a certain outcome (a try) into a missed opportunity.

This situation though was different. Chambers was chasing a fast-moving ball, rolling along the ground and had no New South Wales players around him when he tried to score. His attempt to score saw him get a finger or two on the ball but not quite ground it, irrespective of where the line was.

Who’s to say that had he got there three steps earlier, that he wouldn’t have replicated the same result then too?

Today, referees appear to be too hasty to award penalty tries. In this situation, no penalty try should’ve been awarded. Rather, Jack Wighton should’ve been sent to the sin bin for 10 minutes and Queensland awarded a penalty.

When you consider that New South Wales scored just four minutes later, it’s quite possible that the penalty try to Queensland actually did them a disservice as opposed to helping them out.

If Queensland had have scored after Wighton was binned and then the New South Wales try four minutes later never happened, Queensland would’ve been right in this game at halftime and a whole heap of dynamics are all ultimately changed beyond that.

As was the case though, and we’ve seen it happen this year and in those past, the team who conceded the penalty try managed to hit back shortly after, thereby nullifying the penalty try entirely anyways.

It’s time to start punishing teams and players more harshly for illegal plays. Instead of awarding penalty tries in questionable situations, how’s about declaring a professional foul, where the perpetrator gets ten in the bin, and the side that was fouled gets an immediate seven-tackle set.

Something different needs to happen. As it stands, penalty tries are being dished out like points for behinds in AFL.