Women's Origin reminds us why we love rugby league

For the ten thousand plus fans who attended the Women’s State of Origin last Friday night at North Sydney Oval, they were able to witness an almost perfect insight into how sport looks when almost everyone buys in.

You only needed one lap around North Sydney Oval pre kick off to realise this was a special kind of night.

The lines to get in the gates before the ground opened were hundreds deep. Pubs were bristling with blue clad punters and there was even a shout to the game’s English heritage with match day scarves being hawked on Miller Street.

Once inside, even early on in the evening, the ground heaved with happy families and parochial punters. In fact, as I stood on the chilly hill at North Sydney Oval I couldn’t help but be reminded of a bygone era that many callers to AM radio and veteran sports panellists pine for, so by full time when thousand flooded onto the ground to greet the players; it was a full blown bout of nostalgia.

The overwhelming consensus from those who attended the fixture was that it was an all-round success.

On the park it was gripping footy. There is something about the sheer joy with which the women play. Many of the players haven’t been in elite training programs since they were young (like many of their male counterparts) so there is less wrestle in the play the balls and less robotic block plays in attack. It was pure instinctual footy that the crowd lapped up. 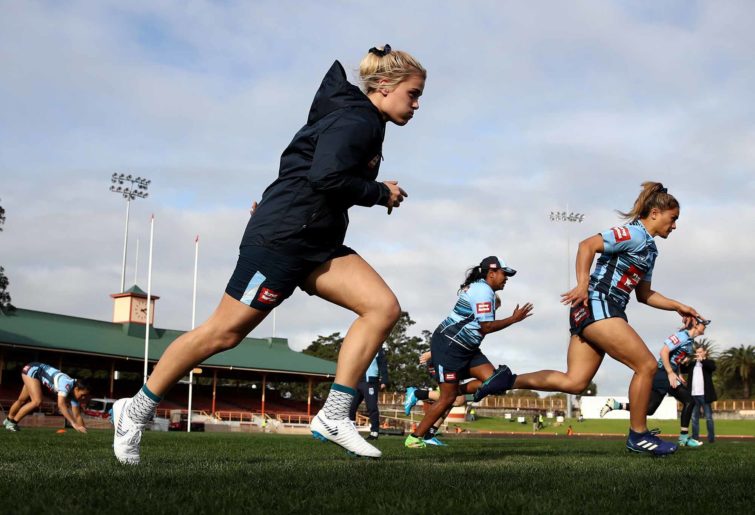 Hannah Southwell of the Blues warms up on North Sydney Oval. (Photo by Cameron Spencer/Getty Images)

The Blues went into the sheds behind at half time but came home with a wet sail as they scored three unanswered tries. Add to this the fact that the weather cooperated and that the event was held at a historical venue with easy access to the CBD.

This struck a harmonious balance between the huge gripping event of Origin and the grassroots simplicity of women’s sport.

The fact that many of these athletes fronted up for work on Monday morning was nothing short of remarkable.

In fact the growth and success of this game and the women’s game as a whole presents a conundrum for the NRL. Where to next? And even more importantly, how do they monetise this game and get these athletes the payments they deserve? 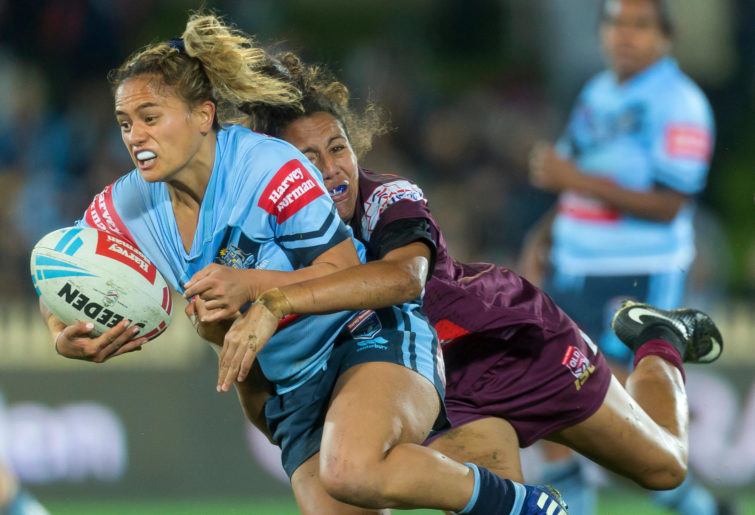 As wonderful and nostalgic as North Sydney Oval is it’s pretty clear that the game has outgrown this venue. Other arenas in both NSW and Queensland need to be seriously looked at.

Venues like Ballymore, C-Bus Super Stadium and even Suncorp Stadium at a stretch have been suggested in Brisbane and the Gold Coast, as well as Jubilee and BankWest Stadium in Sydney.

Yet as heartening as the crowd was, to see the real mark of the enormity of this fixture was early suggestions of viewing figures being over one and a half million people. If these figures are correct the athletes responsible for providing this level of entertainment need the correct remuneration.

Names like Apps, Studdon, Ballinger and Brigginshaw are basically household names in league circles and by the lines of hundreds of young people waiting for autographs and pictures on Friday the evidence was there for all to see.

While it’s only one stand-alone fixture, if it is generating interest of such proportions, players should not have to ask their boss for leave to participate in it.

Women’s Origin has now clearly gone to another gear, the event is growing and shows no signs of slowing anytime soon. Hopefully next year we see even a bigger and more professional fixture.

But those who were there on Friday night will not easily forget a magical night when everything aligned to show rugby league for how great it can be.