How the Brumbies stampeded towards the Super Rugby semis

‘La Bombonera no tiembla. Late’. The Bombonera doesn’t tremble. It beats. That is the legend for one of the most famous football stadiums in the world, and its meaning is quite literal.

When a group of Wales touring players went to watch the local superclasico local derby between Boca Juniors and River Plate back in 2004, they came back with eyes bright and bodies still quivering with excitement. They said they could actually feel the stadium begin to move and sway as one hundred thousand fans jumped up and down in rhythm.

Researchers have proved that ‘the chocolate box’ – especially the end occupied by three tiers stacked directly atop one another – does, in fact, shift a few inches in the air as the chanting and stamping starts.

It was designed that way back in 1951 by the architect Viktor Sulcic, in line with engineering theory which allows for some movement in tall buildings which are likely to be subject to the earthquake tremors. It is designed to be supple rather than rigid, to move with pressure and avoid cracks in the concrete foundations.

Those three tiers of stands, stacked so precariously on top of each other, wave in the wind and slide with the stamping of feet. La Bombonera is a living, breathing shrine to sport – and the privilege of the god-like view that it offers to so many supporters rests on an earthquake changing every moment beneath their feet.

It is a giddy, euphoric experience. As Uruguayan midfielder Ariel Krasouski recalled; “When I first entered La Bombonera, I started running to warm up and I felt like the ground was shaking.

“At first, I thought it was my legs, and I was worried. Was I so nervous that I was shaking? That had never happened to me before.

“Then I realised that it wasn’t me, it was the ground. The ground was moving. Later, I realised it happened to all the players. When La Bombonera is full and all the fans are singing, it has that powerful effect on you. Not just mentally, but also physically.”

The following video gives a small taste of what that experience is really like.

The beating heart of Australian rugby has moved abroad to South America in the past couple of weeks. The best Australian under-20 team for many years advanced to the final of a tournament held in Rosario, in the central Argentine province of Santa Fe. They lost by a single point, 24-23, to the reigning champions from France.

Meanwhile, the best Super Rugby side in Australia, the Brumbies, will travel to Buenos Aires to meet the Jaguares for the right to play in the 2019 final.

Both teams have flashed that rare ability to think on their feet when the ground is changing beneath them, and to execute game-plans with a clarity of vision which has become increasingly rare in the professional era.

The success of the under 20’s, and what it could mean for the grass-roots of the Australian game, is a topic deserving an article to itself. More immediately, the conclusive quarter-final victory by the Brumbies over the Sharks provided an instant fix for those looking for green shoots of hope in the short term – those three little months now remaining between now and the World Cup in Japan.

The men from Canberra are the only professional team in Australia, including the Wallabies, currently capable of making an effective plan for their opponents and then implementing it when the ground begins to shift on the day.

That process is a delicate one – too little information, and you go in unprepared for the seismic movements that are bound to occur during a match. Too much, and you lose clarity in a labyrinth of half-digested ideas. Dan McKellar and his coaches have got the balance exactly right in recent weeks.

They entered the quarter-final with an attacking framework aimed at exposing the defence of the Sharks’ tight forwards near the breakdown, principally by the use of the in-pass off first receiver.

The beginning of the game represented a dream start from the coaching and planning viewpoint.

This may look like a fairly innocuous wide play, but there is a definite intent behind it. The idea is to force the two widest back defenders (No. 13 Lukhanyo Am and No. 14 Sibusiso Nkosi) to commit themselves. Once the Brumbies fix the positions of those two, they can implement the next stage of their plan. 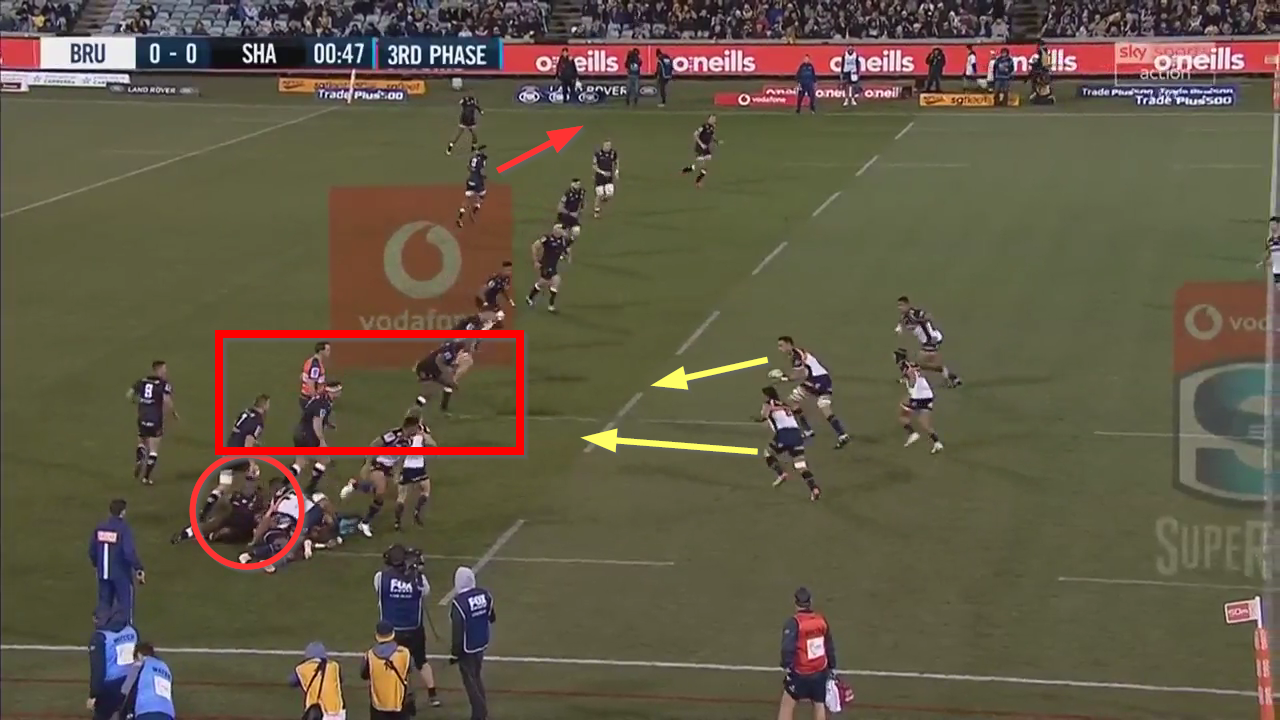 Nkosi is consumed in the breakdown, and Lukhanyo Am is already tracking back across the field to defend on the far side. This means the Brumbies have stripped down the defence to tight forwards near the ruck, and a noticeable gap has developed between the second and third defender out from it.

When Rory Arnold receives the ball from Joe Powell, he only has eyes for the in-pass and the mismatch between No.8 Pete Samu and Sharks No.3 Coenie Oosthuizen. The Sharks tight-head simply does not have the leg-speed to close the gap between him and his fellow prop Mzamo Majola.

The Brumbies’ set-up for their second try of the game, from a lineout in the 10th minute, was even more lucid and convincing.

Pay close attention to the angles of entry, and the second effort in the cleanout at the first ruck in midfield. 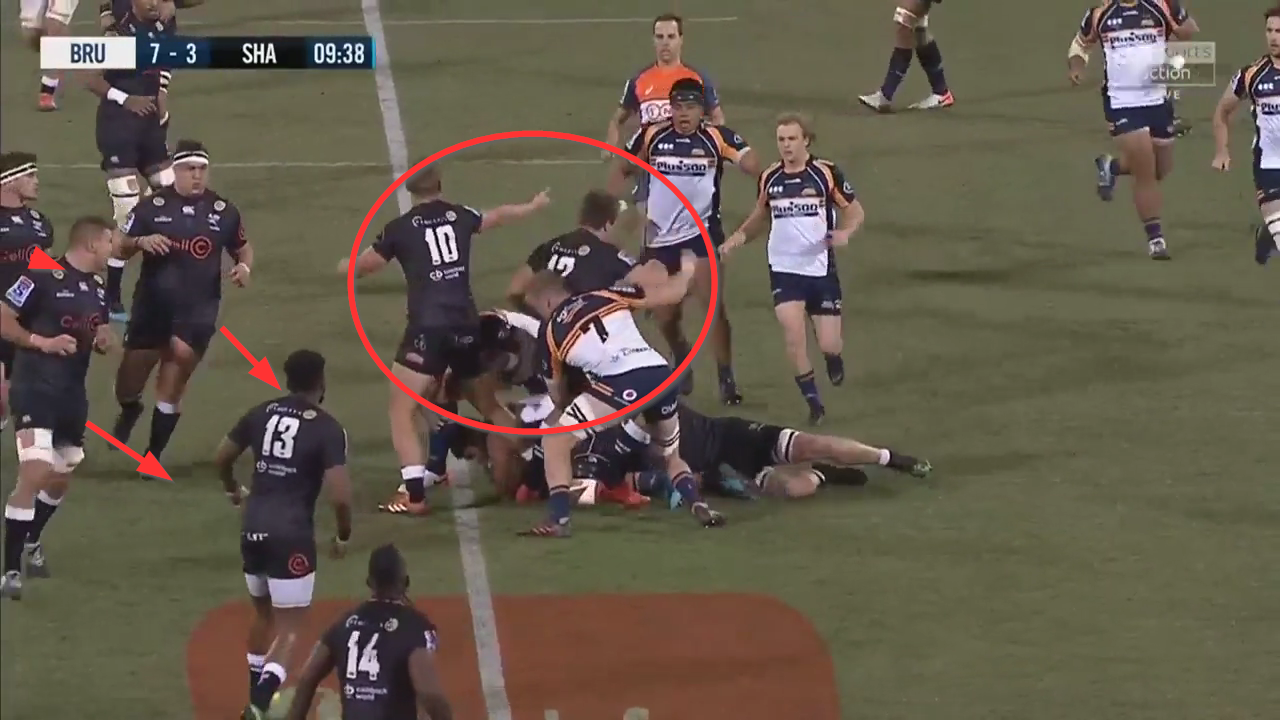 The two Sharks backs (No.10 Robert du Preez and No.12 Andre Esterhuizen) nearest the action are targeted for special attention. Both have their arms in the air in protest and they know they are being taken out of the play. Inside centre Irae Simone is careful to wall off du Preez by keeping his body in between the Sharks outside-half and the target area on the following phase, and Tom Cusack stays on Esterhuizen well beyond the ruck perimeter!

Only now does the Brumbies’ intention become crystal clear: they wanted Esterhuizen and du Preez cleaned out to one side of the play, and Coenie Oosthuizen wrapping around in the same direction so they could exploit the gap between two tight forwards in the other direction.

The in-pass has the effect of drawing out the second and third defender on to Scott Sio at first receiver and opening the hole underneath them for Tom Banks. When Oosthuizen tries to recover, he finds a couple of Brumbies standing in the way, and Esterhuizen is a couple of steps short of Henry Speight in the crucial scramble back to the goal-line.

It was not until the 72nd minute of the second half that the Brumbies had another, much simpler chance to implement their attacking plan.

On this occasion, there is no need for the in-pass. Scrum-half Joe Powell is able to run at the second defender in the confident knowledge that the man underneath him (No.18 Thomas ‘the Tank’ Du Toit) has been swallowed whole by the cleanout of Sam Carter. 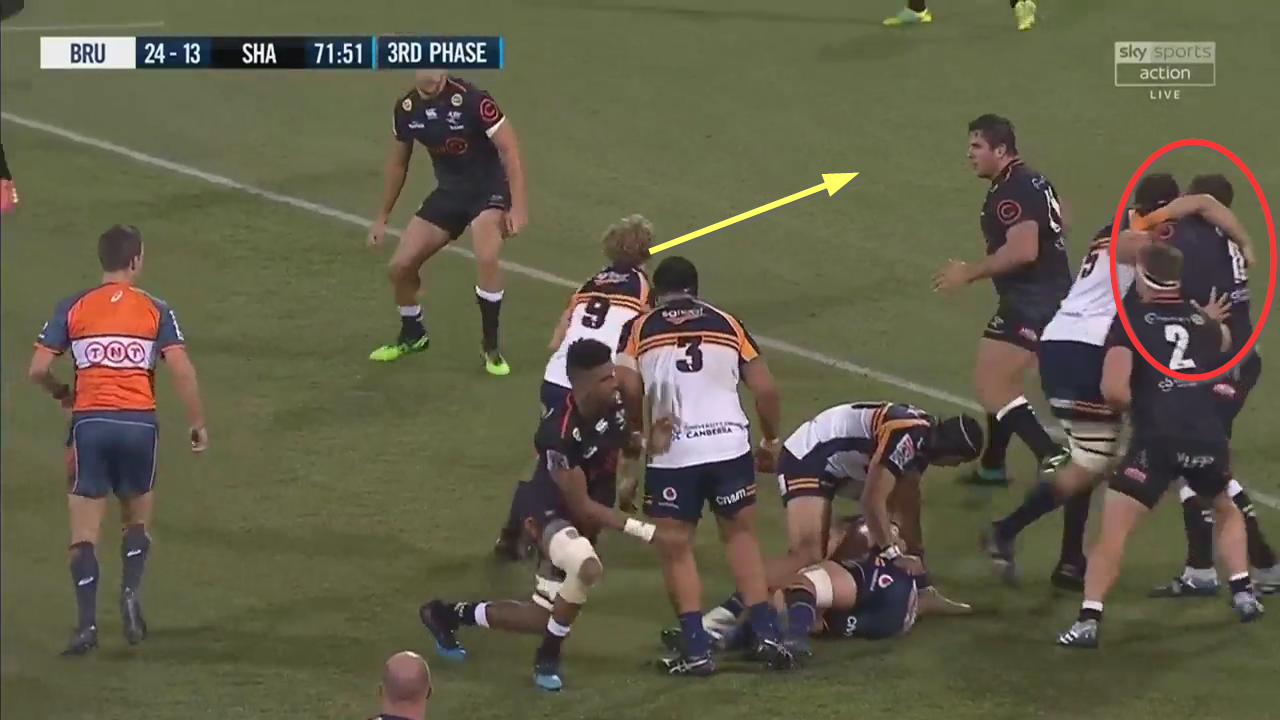 Carter has Du Toit in an especially loving and protracted embrace, and that exposes replacement prop Juan Schoeman to a one-on-one mismatch with Powell. With a bit of room to move, there can be only one winner of that contest.

With a satisfying sense of symmetry, the Brumbies finished the game as they had started it, with another perfectly lucid application of their basic attacking idea.

The pass to first receiver Irae Simone drags the three South African tight forwards across field towards him, before Banks is again released on the line underneath all of them.

The value of pulling the defenders out towards first receiver is fully pointed because they all have to change direction to have any chance of denying Tom Banks. 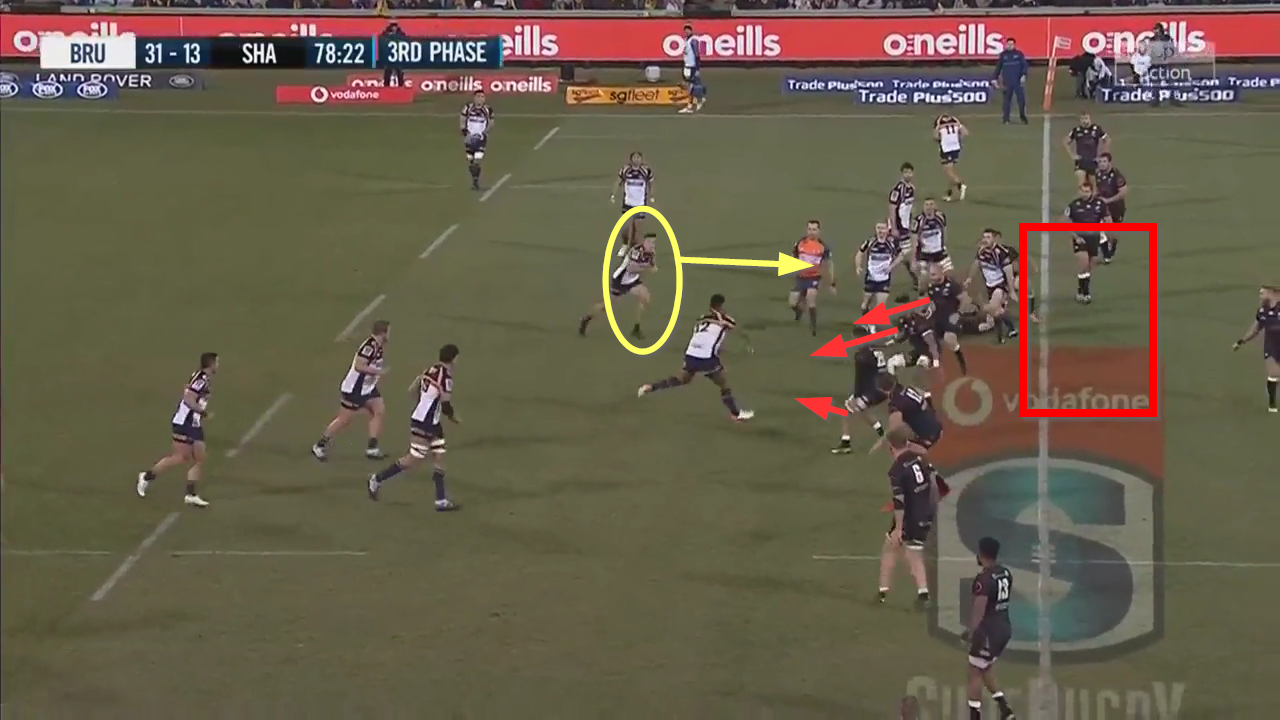 La Bombonera is one of the most thrilling stadiums in the world in which to experience football. It distils spectator excitement not only in football, but in sport generally in its purest form.

From the coaching point of view, the challenge is to manage that desire and excitement and give it a cool, intellectual direction that can be realised on the field of play.

Both the Australian under-20 team at the recent World Junior Championship and the Brumbies on their long winning run in Super Rugby 2019 have shown the ability to keep clarity of purpose under physical pressure, as the sands begin to shift under their feet.

In this respect at least, they are superior to the Wallabies – at least until those Wallabies can prove otherwise.

Argentina, whether it is Rosario or Buenos Aires, currently represents the epicentre of Australian rugby aspirations. Where the under-20’s narrowly failed to bring home the cup after an outstanding campaign, now the Brumbies have to travel 300 kilometres south of Rosario to face the Jaguares, with a place in the final of Super Rugby 2019 at stake.

On the evidence of their win over the Sharks, they have enough to win what is likely to be a tense, claustrophobic defensive contest. Of all the Australian Super Rugby sides, the Brumbies have demonstrated the ability to execute a game-plan under pressure, with the ground shifting under their feet.

Indeed, I believe they would be good enough to overcome a composite selection from all of the other three Australian teams because of that very quality.

They are already good. Now they have the opportunity to become great – to join the pantheon of championship-winning Brumbies’ teams of 2001 and 2004 and, incidentally, lend Michael Cheika the foundation-stone he so sorely needs. A foundation that sways with changes in the opposition, and will not crack when the stamping begins.