The Roar's AFL expert tips and predictions: Round 15

The run home to the AFL finals is well and truly upon us, with just nine games remaining for each club for before sweet September action.

The nine-match round returns with a bang this week, with a Friday night blockbuster between Geelong and Adelaide the pick of the bunch.

Even if Round 15 looks reasonably straight forward, there are just enough tricky matches to keep things interesting.

We’re paying out early on the Crowd taking home this year’s overall title, with a five last week enough to put them six points clear of first-placed expert AdelaideDocker.

There was little movement among the experts that round, with AD remaining three points ahead of myself for the expert lead – although Daniel Jeffrey has fallen two points behind Marnie Cohen at the table’s rear.

It’d take something special for things to change over the last nine rounds, but stranger things have happened. At least I’m one point behind first place in The Roar’s Cricket World Cup tipping…

We’re entering now-or-never territory for Essendon as they try to avoid a second straight non-appearance in the finals, but the task certainly isn’t easy against the high-flying Giants.

GWS’ poor record at the MCG is often discussed, but their strong record at Docklands flies under the radar. The Giants have six wins and one draw from their last nine games at the venue, and should build on that solid run tonight.

Friday night is where we get our meat and potatoes in the form of a top-eight blockbuster between Geelong and Adelaide. The Crows are in a rich vein of form and are more than capable of taking it to the ladder-leading Cats, but they’ll have crack one hell of a hoodoo to do so.

Most teams have horror records at Kardinia Park over recent seasons, but Adelaide’s is something else. They’ve won three of their 20 visits to the Cattery, with the last of those coming back in June 2003. The Cats are playing too well to see that streak broken now, with last week’s slip-up probably making the task harder for the visitors.

Venue hoodoos are a hot topic on Saturday as well, with Hawthorn fans happy to point out they’ve won six of their seven all-time meetings with West Coast at the MCG. Unfortunately, they’re just too far out of form for that to be remotely relevant. This is an important opportunity for the Eagles to post a big win and I think they’ll take it.

The Buddy-less Sydney Swans should similarly prove far too strong for the struggling Gold Coast Suns, despite (and because of) the shocking upset loss they suffered last year. The Swans actually have an incredibly soft draw in the run home, surely we’re not about to witness a repeat of 2017?

Saturday night’s matches look relatively straightforward too. Collingwood should extend their superb recent record over North Melbourne at Marvel Stadium, while the Western Bulldogs just play way too poorly at the Adelaide Oval to be seriously considered an upset chance against Port Adelaide.

In fact, Sunday’s slate of matches looks fairly cut and dry too. My gut is telling me St Kilda are an upset chance over Richmond under the roof, but one look at the likely Tiger inclusions – Trent Cotchin, Shane Edwards, David Astbury and Kane Lambert – means I’m telling my gut to shut it.

Melbourne’s win last week would have Brisbane fans – who won’t really believe their side can play finals until they’re watching it with their own eyes – nervous, but the Lions have looked deadly at The Gabba almost all season and should prove too strong.

Fremantle let me down in the Shoe-In of the Week last round (ruining a run of six straight picks), but they get the nod again against Carlton in Perth.

I am suspicious about how straight forward this week looks on paper – hope it doesn’t come back to bite me!

Thoroughly looking forward to Friday night between Geelong and the Crows. I suspect it will be game of the round. Despite a loss last week, Geelong is still the best team in the competition and the Crows are finally hitting their straps, taking a couple of strong wins into the bye.

Adelaide absolutely have what it takes to bring home the four points, but I just can’t see the Cats dropping a second game in a row – especially back at home.

This week is also the start of Richmond’s surge towards September. The Tigers currently find themselves in ninth with a percentage of 92.0 – the sixth-worst in the competition and 14 per cent behind the worst of the top eight (West Coast’s 106.2).

Luckily for Richmond, they are looking to welcome back a number of key players, including captain Trent Cotchin and only leave Melbourne once in the run home. They should get the four points against St Kilda and start their fight for finals on a winning foot.

Essendon and the Giants should be an interesting fixture, with one big factor favouring the Bombers. The Giants have a terrible post-bye record (2-5) and are coming off a trip to Tassie and the break this week.

Not favouring the Bombers is their insipid performance last time these two teams met, which saw them open their 2019 season on the receiving end of a 12-goal thrashing. I don’t think this week will follow that exact same script, but I’m tipping the Giants to win.

North Melbourne is my only real left field tip this weekend. Very much tipping with my heart, but the Pies can be challenged and at Marvel, I think the Roos should get the job done.

Pretty straight forward stuff from there on. Brisbane, Port Adelaide, Sydney and Freo should be too strong at home, while West Coast will simply prove too strong.

It concerns me that this week looks so straightforward. GWS have already towelled up the Bombers once this season, and you’d imagine they’ll repeat the trick tonight.

Adelaide are one of the few teams who look like they could spring an upset this week but, with Geelong at home and looking to bounce back from last weekend’s surprise loss, you can’t go past the Cats in this one.

Hawthorn are looking thoroughly uninspiring right now. They have little chance of beating the Eagles, while Gold Coast taking anything out of their trip to Sydney is even less likely – even if the Suns won their last match at the SCG. The Swans are playing well and should notch a strong win despite Lance Franklin’s absence.

Collingwood have too much class in the middle for the Kangaroos to handle, and Port will fancy their chances against the Dogs after last week’s upset win over the Cats. The Power are capable of producing a shocker, but they’re looming as a side who could spring a surprise or two come finals time.

The ‘put in a good performance for our soon-to-be sacked coach’ factor could play into St Kilda’s hands against the Tigers, but the Saints’ form is just so mediocre that one has to tip Richmond.

Richmond should return to their winning ways against the Saints. (Photo by Dylan Burns/AFL Photos/Getty Images)

The other two Sunday games would appear foregone conclusions: Brisbane to keep up their strong season at the Gabba against Melbourne, and Fremantle to chalk up an easy win against the Blues out west.

Essendon were diabolically bad last week – saved from greater ignominy only by an inaccurate opposition. They’ll feel more comfortable at home, but GWS are a very good side, and they’re fresh off a bye and a win – I’m going with the safe tip of the Giants.

Geelong and Adelaide play on Friday night in the Cats’ second consecutive clash against a South Australian side. Their first, against Port, did not go so well – but that was to be expected given their terrible record after the bye.

The problem for the Crows, though, is that Geelong have a fantastic round-after-the-round-after-the-bye record. They’re at home and still a superb side, so I’ll be backing them to stop any thoughts of an upset here.

Saturday’s chock-a-block full of clashes. Hawks and Eagles our early clash, and this one is not too hard a tip: I’ll go the Eagles. They’re simply the better side, and Hawthorn have looked decisively mediocre coming off three losses.

Sydney host Gold Coast in the twilight clash and, while this exact fixture ended up being upset of the year last year, I’m not certain it’ll happen again.

Collingwood host North and Port host the Bulldogs in Saturday night clashes. The former is a tough clash to pick; Collingwood have been winning without looking good of late, while North are a little up and down themselves. I do see upset factor here, but my tips don’t need randomness, and I’ll go the Pies. 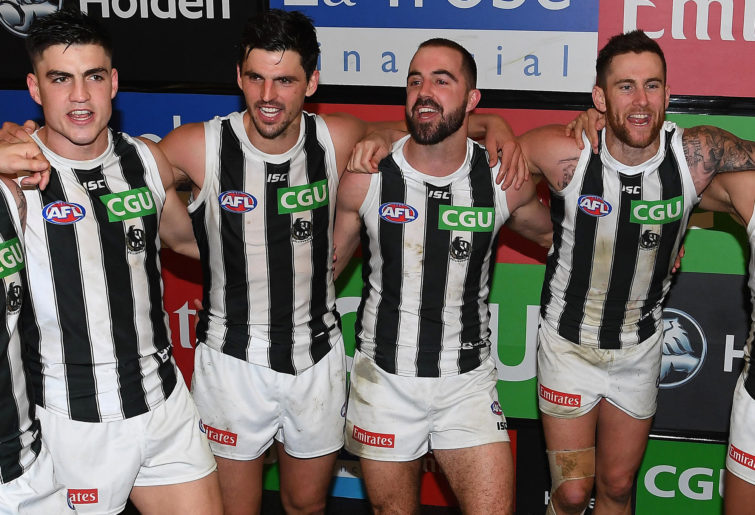 The latter is simple: if Port keep up last week’s form, they win comfortably. Expect them to win either way, comfortably or not.

Sunday is full of intriguing matches (that are kinda easy to pick). I suspect Richmond, despite their up and down year, are more likely to win this, so I’ll reluctantly tip ‘em.

Brisbane host Melbourne up at the Gabba; both are coming off nice wins, but only one is in the box seat for finals. The Lions should win this one comfortably. Freo host Carlton over in WA in the round’s final clash, and despite some serious injury concerns (no Jesse Hogan!), the Dockers are still favourites.