To this point in the season it has been the accepted wisdom of most students of the NRL that the 2019 premier would almost certainly be either the Roosters, Storm or Rabbitohs.

A glance at the NRL ladder after Round 14 clearly supports that logic.

However, the Cronulla Sutherland Sharks must now be put into that category.

Why on earth would I think that?

I mean, they are sitting in just seventh place. Of the seven games that they’ve played so far against the other current top eight sides they’ve won just two of them – one of those being against the erratic Eels.

Of the other current top eight sides, only the eighth placed Eels have conceded more points than the Sharks.

So how have I come to the conclusion that the Sharks are suddenly going to click into gear and thunder through their last eleven games, secure a top-four spot and then go on to lift the Provan-Summons Trophy?

Because Wade Graham has finally arrived as an elite player, that’s why. 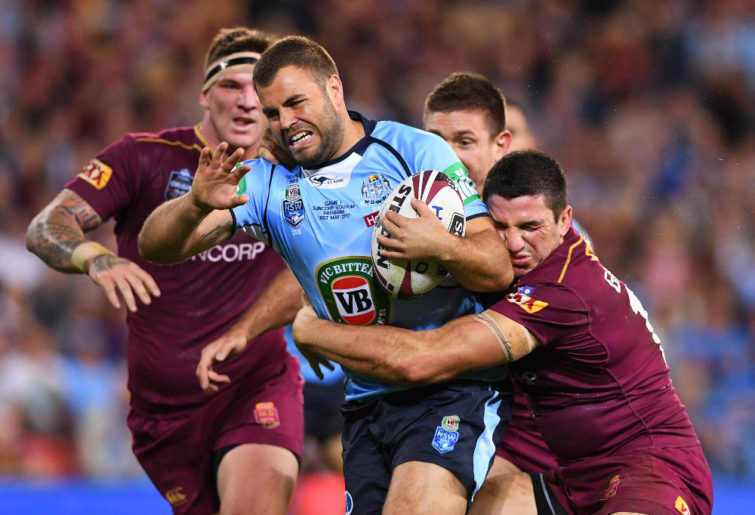 He has arrived back from his long injury lay off looking like a more composed, determined and focused player than ever before.

No longer is he the brash 17-year-old talent that debuted in 2008 for the Panthers while still at high school.

No longer is he the player with heaps of potential but also plenty of errors and brain snaps in his game.

No longer is he one of the larrikin boys in the team.

However, it is now clear to me that the proud Bundjalung man is now a dominant leader of his club and a bona fide match winner in his own right. There might still be niggle and mongrel in his game, but there is so much more.

And every team in the NRL should be very afraid.

When Graham did his ACL in the 12th minute of the Sharks qualifying final against the Roosters on September 8 last year it started him on a long, hard road to recovery. The Sharks media unit made a great video history of his recovery that went right up to his return to the field against the Eels. Clearly that lay off has served to really focus Graham on what is important to him.

It is very clear that winning football matches is the whole focus now.

His address to his teammates when his comeback was announced was ominous for the Shark’s opponents.

There is no question that Graham is now leading by excellent example.

In that first game back he played just 31 minutes. However, he made 12 runs for 125 metres, two line breaks and laid on a line break assist. While he gave away a penalty, he didn’t make a single error or miss a tackle.

My position on the sideline for ABC Grandstand gave me an extremely close vantage point for his second game back. Sitting right next to the Sharks bench, I could see the intensity in how Graham watched the game unfold, as well as the deliberate and focussed way he warmed up.

By the 25th minute the Sharks were down 20-0 and the game looked gone. Then coach John Morris brought Graham on and it all changed.

In spite of having had barely a quarter of the possession to that point, Graham rallied his team brilliantly. The possession swung right back in their favour, as did the momentum.

At the half time break the Sharks were only 12 points back and they were clearly in the ascendency. By the 55th minute the scores were level. Only a concerted rear guard action by the Raiders denied the Sharks what would have been a memorable comeback win.

Perhaps if Morris had brought him on earlier they would have won.

Graham not only drove his teammates to greater efforts, he got right in the face of his opponents and put them off their games.

For him to be selected to play in Origin 2 after just 80 minutes playing time back from an ACL reconstruction seemed a huge risk. However, Graham rose to even greater heights.

Firstly, he came on when Boyd Cordner went to the head bin and did brilliantly in the second row. However, when he went into five-eighth after half time – due to an injury to Nathan Cleary – he was simply superb.

His playmaking, running, passing and kicking were all top notch. You can be sure that Freddy Fittler will be seriously considering putting the number six on Graham’s back for Game 3.

And you can clearly see he is a strong contender for being a captain of the Blues.

In 56 minutes Graham made 100 metres from ten runs, laid on a line break and try assist, made 13 tackles without a miss, and he made no errors and gave away no penalties. It is those last things that should really frighten opponents. 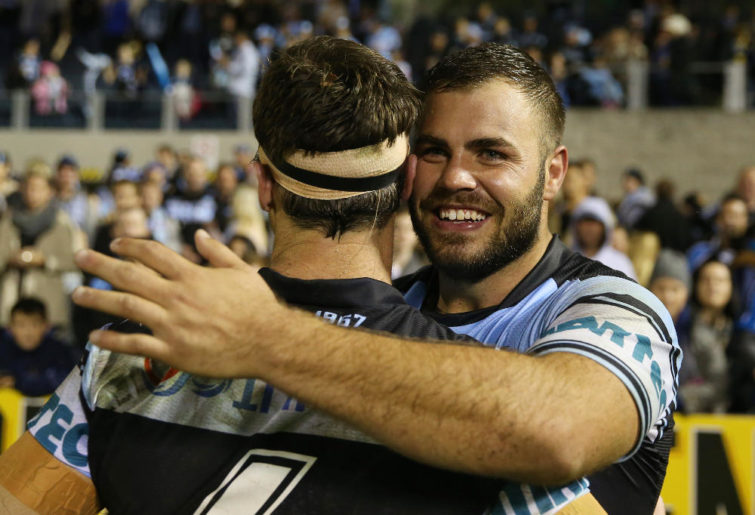 Graham, with his huge, friendly smile that you can’t help but like, and his impulsive behaviour, could always be relied on to miss tackles, make errors and concede penalties. They were his Achilles heels.

Perhaps not anymore though. He has come back fresh, focused and determined. He is the x-factor that the Sharks were missing to bring all of their parts together and make the team click into top gear.

And those other parts are good. Really good.

Paul Gallen will not die wondering about what could be in his final season. Andrew Fifita is in imposing form up front.

Young giant Braden Hamlin-Uele is keeping Fifita on his toes to maintain his starting spot. Jayden Brailey continues to grow into a great hooker.

Briton Nikora has talent to burn in the back row. In Bronson Xerri the Sharks have unearthed another great talent.

While Josh Dugan and Matt Moylan’s form can be patchy, when they are on they are both match winners.

Shaun Johnson is finally behind a pack that can reliably give him room to move. With his pace and skill, that space could finally see Johnson live up to the potential we’ve always known he has but has failed to turn into reality.

Next to him is Chad Townsend who is in the best form of his career. How he hasn’t yet been seriously been mentioned for the Blues number seven jersey is beyond me. His game control, organisation and kicking is only behind Cooper Cronk and Daly Cherry-Evans right now.

It seems to me that with the return of Wade Graham to the helm of this superb list of talent that things could all go very well for the boys from the Shire.

Of their eleven remaining matches they need to win six to be assured of a finals spot. Only two of those games (Storm Round 17, Warriors Round 18) involve leaving Sydney. Six are at Shark Park. Seven are against sides in the bottom eight.

Everything is coming up Milhouse and I reckon it’s a good bet we’ll be hearing this song a fair bit in the coming months. Perhaps even on Sunday six October.

Up, Up Cronulla, The boys in the black, white and blue.
Up, up Cronulla, Name of the Sharks fits* you
Sharks, Sharks forever, Go out and play without fear
Now’s the time to see good football, For the Sharks are here!