Plenty of pundits, myself included, had the Crows returning to finals – and even the top four – this season after the disaster that was 2018.

And while the first of those things looks likely, and the second possible, this is not the Adelaide team I was expecting.

The free-flowing nuclear-powered Crows of 2017 are but a distant memory. They’ve been replaced by a team that more closely resembles Neil Craig’s Crowbots of the mid-2000s.

They’re stodgy, disciplined and deliberate. All the joy has been sucked out of them. Well, except for Eddie Betts. You can’t take the joy out of Betts; he is joy.

This Crows side is still a good one, it’s just not very inspiring. They don’t feel like a top-four team – though, to be fair – few do this year.

These Cats feel very much like a top-four team and are the deserving premiership favourites.

Despite last week’s slip-up, which cost them their second loss of the year, Chris Scott’s team is the highest-scoring team this year and has conceded the fewest points.

Just how they stack up against the best teams of recent times is a debate for another day, but they’re clearly the class of this season to this stage.

What they do extremely well is create good shots at goal, while at the same time forcing their opponents into tough ones. Currently, 60 per cent of their scoring shots are goals – you have to go back to the 2004 Saints, who at 62 per cent are the last team to finish the home-and-away rounds at 60 or better.

The compound their advantage, their opponents are getting a goal from only 45 per cent of their scores. The net result, is that from 49 extra scoring shots, Geelong have outscored their opponents by 393 points. That’s a lot.

The Crows, too, are strong defensively. And like the Cats, their opponents are getting a goal from just 45 per cent of their shots. In fact, these sides are first and second when it comes to conceding goals from inside-50s – Geelong are best at 18 per cent and Adelaide second at 19 per cent.

Port Adelaide showed the formula to beat Geelong a week ago. The Power were +36 in contested possessions, +16 clearances and +12 inside-50s – OK, I guess that kind of dominance is the formula that beats most teams.

Nonetheless, the Crows need to win the contest and territory battle if they’re to be any chance tonight.

Rory Sloane and the Brothers Crouch will back themselves against Patrick Dangerfield, Tim Kelly and whoever else out of Joel Selwood, Cam Guthrie, Luke Dahlhaus and Brandan Parfitt finds themselves hunting the footy in close.

It’s on the outside though where the Cats look more dangerous. Mitch Duncan, Gary Ablett and the aforementioned Kelly are all surgeons with the ball, and Tom Stewart and Zach Tuohy are smart out of defence.

Ablett is currently averaging 20.8 disposals and two goals a game. It’s great to see him playing great footy again in games that matter.

He’s on track to become the first player since Steve Johnson in 2011 to average 20 disposals and two goals a game for an entire season – Michael Walters is also trending that way.

Adelaide need the likes of Rory Atkins, Brodie Smith and Paul Seedsman to play well and be smart with their kicks into attack on the narrow GMHBA Stadium. 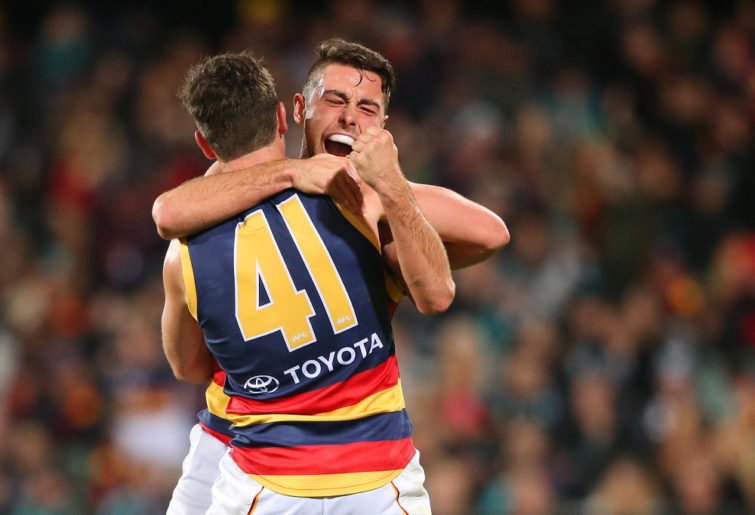 Geelong have made a pair of changes after their loss with Lachie Fogarty and Jed Bews coming in for the dropped Darcy Fort and concussed Gary Rohan.

They’ve named Mark Blicavs in the ruck, which is unlikely and would be a strange choice considering he’s in All Australian form as a key defender. But there’s no obvious second ruck to Rhys Stanley, who’s been named to start on the bench.

Why do we continue with this charade?

Adelaide have made three changes to the team that beat Richmond before their bye.

Bryce Gibbs is back for his first game since Round 11, and is joined by Elliott Himmelberg and debutant Ben Davis. Out of the side go three significant players in Josh Jenkins, Wayne Milera and the underrated Cam Ellis-Yolmen. With Tom Lynch already out of the side, they look very thin for attacking options.

It’s been 16 years since Adelaide won in Geelong. They’ve lost their past ten matches at Kardinia Park, and I can’t see that changing tonight.