While the cricket world pondered flat tracks, run-fests and the breaching of 500 in the lead up to the World Cup, one man predicted the low-scoring tournament we would come to see.

Speaking at the captains’ press day a week before the opening match, Virat Kohli was almost prophetic in what would ensue.

“I don’t see many high-scoring games happening the latter half of the tournament… you’ll see 250 defended – that’s the kind of pressure the World Cup brings.”

And oh how right he’s been proven.

Of the 30 completed games this World Cup prior to Sri Lanka’s clash with South Africa overnight Australian time, just 12 have featured scores of over 300.

In fact, in the past eight games, the average score has been just 243. We’ve gone back 20 years, and the tournament has benefitted from it.

These results bely pre-tournament predictions that – much like the previous UK summer – records would tumble and previous batting standards would be swatted aside. Crowds would suffer sore necks such was the expected onslaught.

But that prediction – unlike Kohli’s – is yet to materialise. The 400 mark is yet to be cracked, let alone 500.

The weather, undoubtedly, has played a part. Last year’s European heatwave was conducive to flatter wickets whereas the unseasonal rain this summer has given pitches more time under covers, thus aiding the bowlers.

Australia’s win at Lord’s on Tuesday, where Jason Behrendorff and Mitchell Starc took nine of the ten English wickets, was testament to this.

But competitive decks are just one reason why we’ve seen lower scores this World Cup. The tournament has shown that when the pressure is on, the free-flowing styles we see in bilateral series simply can’t be sustained.

The concept that pressure can inhibit performance is a fairly basic one, but to see it play out so clearly has been, well, heartening.

But why have batting totals suffered to this extent? Without professing to know the first thing about sports psychology, the drastic escalation of importance – and in England’s case, the added pressure of being the host – likely plays a part.

Such is the abundance of ODI scheduling throughout the year, games come thick and fast and rarely carry any overarching significance. Of course, the incentive to win is still strong and pressure situations arise, but perhaps subconsciously, cricketers discern the lack of consequence in these games.

Should they fail, a chance at redemption is usually just around the corner. Perhaps more pertinently, though, the weight of expectation is far lower than in a global tournament. Legacies aren’t formed in a five-game series.

This is, quite obviously, in stark contrast with the World Cup, where everything matters. It’s the one nugget in the crowded schedule that is circled, underlined and highlighted. It’s the one time the burden of expectation is unrelenting. Pressure is amplified and as such, skill execution can suffer.

Olympic athletes go through a similar process, but perhaps they’re better equipped to deal with it.

Australian assistant coach Ricky Ponting – a man suitably qualified to speak about World Cup pressure – offered this after the win against England: “The scores generally have been a little bit lower this World Cup,” Ponting said.

“Justin and I had spoken about it right at the start – tournament play is a lot different to a regular five-game one day series where England have scored some huge scores in the last two or three years.

“But was that game style going to stand up under pressure? We’ll have to see what happens in the next couple of games.”

Whatever the explanation for a low-scoring World Cup, it’s been heartening to see the 50-over format receive some love after a fairly tough decade.

The emergence of a younger, aesthetically superior cousin in T20 cricket has made the poor format feel unvalued.

And while a few good World Cup games doesn’t eradicate every issue with the 50-over game, fans have rediscovered their affinity for the more nuanced form of white-ball cricket.

Charting the still fledgling career of Matthew Renshaw, it becomes clear the 23-year-old has experienced more ups and downs at an age many Australian Test cricketers are yet to even debut. 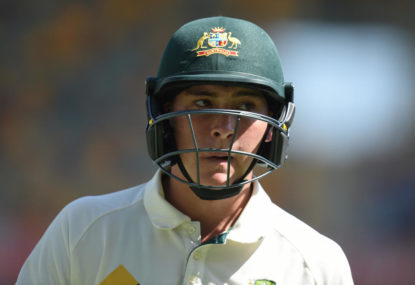