And then there were two. The Crusaders and the Hurricanes went hammer and tongs in a Christchurch classic, with the home team just pipping the visitors in the end.

And in South America it was very one-sided, the Jaguares making history as they emphatically put the Brumbies to the sword.

These are the players that caught fire this week.

15. Emiliano Boffelli
An electric display from the 24-year-old. He was always around the ball, using his pace to create things and break apart the Brumbies’ defence.

14. Sevu Reece
A brace for the Fijian, who scores tries for fun. Right now one of the best finishers on the planet. Will be wearing black soon.

13. Matias Orlando
Two tries for the bustling outside centre and 70 metres as well. Kept cutting the Brumbies’ defence to shreds all night.

12. Ngani Laumape
Two tries and a huge display from the Hurricanes centre. A freight train with ball in hand and some silky skills to match.

11. Matias Moroni
No tries but the winger worked his socks off. Made a team-high 108 metres from ten carries and beat five defenders, as well as setting up a try. A joy to watch.

10. Richie Mo’unga
Pure class once again. Finished with 20 points, with some masterful kicking and excellent game control. Has to be on the plane to Japan at the end of the year.

9. TJ Perenara
Very unfair for this man to be on the losing side. The No.9 gave it everything, scoring a brilliant try and setting up another. May have pipped Aaron Smith to the starting All Blacks spot. 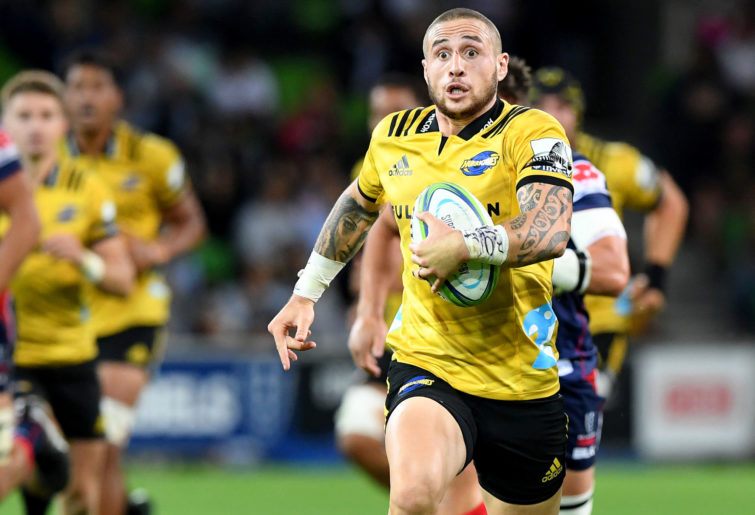 8. Kieran Read
The old-stager showed there’s still plenty left in the tank. Gave a great shift in the back-row, making a whopping 15 carries, more than any other player in red.

7. Matt Todd
Created a try, won a turnover and made a team-high 16 tackles in a herculean effort.

6. Ardie Savea
Yes he’s an open-side, not a blind-side, but we just can’t leave Julian’s little brother out. He was devastating again – one of the best on the field – but was just unable to get his team over the line in a thriller.

5. Isaia Walker-Leawere
Another Hurricane who can hold his head high after Saturday. The lock was strong in the breakdown and excellent in defence.

4. Tomas Lavanini
A weapon in both attack and defence. Crossed for a try and made more tackles than any of his team-mates. Immense.

3. Santiago Medrano
Dominant at scrum time and in the line-out, the 23-year-old was exceptional. Chipping in with nine tackles as well, as the Jags suffocated the Brumbies.

2. Agustin Creevy
The hooker was in everything against the Brumbies, making ten tackles and winning a turnover. A big performance.

1. Toby Smith
Did a lot with ball in hand, managing to beat seven defenders and make a clean break with his elusive carries. Did his fair share in defence as well.