AFL Team of the week: Round 15

Back to normality with nine games this round, and we saw a number of players in Brownlow contention put their hand up for the three votes.

Back pocket – Jed Bews (Geelong)
Playing his first game of the season, Bews made up for lost time with a fantastic defensive display against Adelaide on Friday night. He went head-to-head with the ever-dangerous Eddie Betts, keeping him goalless while even managing to sneak forward and snag one himself. Had 18 touches at 83 per cent, took eight marks and laid four tackles in a very good display.

Back pocket – Caleb Marchbank (Carlton)
The often-maligned Blue was sturdy in defence for the Blues against Fremantle, helping keep the Dockers to just six goals after a five-goal-to-nil first quarter onslaught. Marchbank had 22 disposals and took eight grabs, using it at a safe 77 per cent efficiency.

Halfback – Zac Williams (Greater Western Sydney)
The Giants’ rebounding gun was in fine form under the Thursday night lights at Marvel Stadium, gaining 631 metres gained from his 29 touches, with 14 of them contested, while he took seven marks.

Centre-halfback – Mark Blicavs (Geelong)
Interesting selection here at centre halfback, but Blicavs changed the game against Adelaide on Friday night with his move into the ruck. With Reilly O’Brien dominating the hitouts, Blicavs was forced into reprising the role he played earlier in his career, finishing with 18 disposals, five grabs, six tackles and 16 hitouts.

Halfback – Jasper Pittard (North Melbourne)
The so-called ‘steak knives’ in the Jared Polec trade has had a brilliant first year at the Kangaroos, and Saturday night against Collingwood was arguably his best performance in the blue and white. Racked up 25 touches at an impressive 88 per cent efficiency, gained over 500 metres and took nine grabs, impressing with his ability to float across the pack and pick off the Magpies’ forward thrusts.

Wing – Marcus Bontempelli (Western Bulldogs)
Set the Bulldogs up with a ridiculous first quarter that needs to be seen to be properly appreciated, winning 11 contested possessions, six clearances and kicking the ball inside 50 four times. Had to deal with a tag from that point on, but was still good enough to finish with 27 disposals, 18 of them contested, nine clearances and ten tackles in an upset win for the Bulldogs.

Centre – Marc Murphy (Carlton)
The former Carlton skipper turned back the clock with a vintage performance against the Dockers on Sunday at Optus Stadium. Amassed 34 possessions, 14 of them contested, won seven clearances, laid three tackles and provided one of the highlights of the season with the match-winning goal in the final 30 seconds of the game. His poise was what lifted Carlton off the bottom of the ladder. 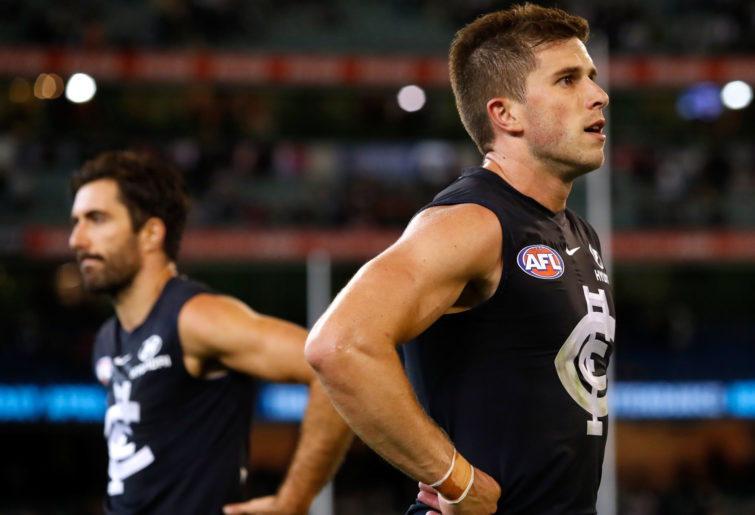 Wing – Tim Kelly (Geelong)
With Patrick Cripps set to miss another week of football having picked up an untimely foot injury, Kelly made his move in the Brownlow Medal race with a best on ground performance on Friday night against Adelaide. He collected 33 possessions, 13 of them contested, won nine clearances and a whopping 652 metres gained, took six grabs and kicked two goals.

Half-forward – Dayne Zorko (Brisbane)
Has been fantastic defensively this year for the Lions, and on Sunday we saw the Brisbane skipper return to form in front of the goals with an electric performance against Melbourne. Collected 31 touches, 16 of them contested, won seven clearances, took seven marks, laid five tackles and booted a season-high three goals.

Centre half-forward – Eric Hipwood (Brisbane)
It took about 20 minutes of game time for Hipwood to turn the game on its head at the Gabba on Sunday afternoon, spearheading a big Brisbane Lions finish against the Demons. Behind on the scoreboard approaching three-quarter time, Hipwood piled on four quick goals in an outstanding cameo, adding his fifth at the start of the final quarter. On an afternoon where the Lions struggled for accuracy in front of goal, Hipwood’s five majors without a miss were invaluable.

Half-forward – Sydney Stack (Richmond)
One of the feel-good stories of the AFL this season got even better on Sunday at Marvel Stadium, with the Richmond youngster likely to collect three Brownlow Medal votes for the first, and certainly not the last, time in his career. Was a powerful presence wherever he got the ball, but it was up forward where he had the most impact, finishing with 15 possessions, five marks, four tackles and four goals.

Forward pocket – Jack Darling (West Coast)
He provided one of the best individual performances from a forward this season, especially when you take into consideration the conditions he did it in. In the teeming rain, Darling was a genuine match-winner with 17 touches, six marks, four of them contested, three tackles and five goals from seven scoring shots.

Full forward – Shaun McKernan (Essendon)
Didn’t have a huge game on the scoreboard, but his impact was massive on Thursday night against the Giants. McKernan hauled in eight grabs, five of them contested, finishing with 12 disposals, 19 hitouts and two majors, including the much-talked-about goal late in the game that levelled the scores.

Forward pocket – Gryan Miers (Geelong)
While Sydney Stack is giving the Rising Star judges something to think about, Miers is also staking his claim playing in the top side in the league. Was excellent on Friday night against the Crows, winning 20 possessions at 75 per cent efficiency, taking five marks and booting two goals.

Ruckman – Stefan Martin (Brisbane)
The reliable Lion has had a monster couple of weeks, and Sunday afternoon’s match against Melbourne was close to his best this season. Going head-to-head with a hobbled Max Gawn, Martin won the contest with his 21 touches, four marks, four tackles and 33 hitouts.

Rover – Luke Shuey (West Coast)
While it was Marcus Bontempelli who helped propel the Dogs with an insane opening first quarter, it was Shuey who led a West Coast comeback in a rain-drenched final quarter at the MCG on Saturday against Hawthorn. How about these numbers: 15 disposals, seven of them contested, and six clearances in the final quarter alone. Finished with 39 touches, 20 contested, 11 clearances, nine tackles and a goal. Huge.

Interchange – Dustin Martin (Richmond)
A great game from the Richmond champion, who enjoyed having a host of stars back out there on the field against St Kilda. Had 36 disposals, took seven grabs and laid three tackles.

Interchange – Lachie Neale (Brisbane)
Continued his outstanding year with another top-notch display against the Demons at the Gabba. Got the ball 38 times, including a monster 23 contested possessions, won 12 clearances, took three marks and laid five tackles.

Interchange – Jack Ziebell (North Melbourne)
The Kangaroos’ skipper deserves a lot of credit for the way he has lifted after a poor start to the season. His performance on Saturday night epitomised the new-look North Melbourne outfit, with Ziebell amassing 25 possessions, ten of them contested, winning seven clearances, taking five marks, laying three tackles and getting forward to slot three goals.

Interchange – Jackson Macrae (Western Bulldogs)
If Marcus Bontempelli doesn’t get you, Macrae will. Unfortunately for the Power, both did a lot of damage on Saturday night, with Macrae racking up a huge 36 touches, 20 of them contested, winning six clearances, taking five grabs, laying six tackles and kicking a very classy goal in incredibly wet conditions at the Adelaide Oval.

Emergency – Jaeger O’Meara (Hawthorn)
Got a stack of the ball on Saturday against West Coast but really struggled to do damage with his disposals. Had 37 touches, 25 of them contested, won 12 clearances and laid ten tackles. Would have made the team if he could have lifted his efficiency up from 32 per cent, while his wayward kicking in front of goal (three behinds) cost his side victory.

Emergency – Mabior Chol (Richmond)
In one of the most surprising performances of the round, the inexperienced Tiger tall was a sensation against St Kilda on Sunday at Marvel Stadium. Chol collected 16 touches, taking nine grabs and booting three goals in a very impressive display. With Jack Riewoldt set to return, does he keep his spot?

Emergency – Josh Kennedy (Sydney)
Was a bull in the middle against Gold Coast on Saturday, collecting 27 possessions, 12 of them contested, taking five marks, laying eight tackles and kicking a goal in a strong win from the Swans.

Emergency – Lachie Plowman (Carlton)
Had the enormous task of minding Fremantle star Michael Walters and performed admirably, keeping him to a respectable two goals. Plowman himself was damaging from the back half with 19 disposals, five marks and six tackles.