Optus ran an ad campaign during this year’s FIFA Women’s World Cup promising a free Optus Sport membership to school students for the duration of the tournament.

After Optus’ disastrous attempt to broadcast last year’s Men’s World Cup, I was more than a little sceptical of their ability to deliver.

The aim, according to the campaign slogan, was to “change the future they see” by showcasing a range of successful female footballers to young girls in a world where men’s sport typically dominates the coverage.

And despite my scepticism that Optus’ campaign was little more than a marketing ploy, I’m starting to believe that it’s actually working.

How do I know this? My mum watched a game.

I love my mum to bits, but I wouldn’t describe her as much of a sports fan. In order for her to voluntarily watch any sort of sporting contest, the match typically has had to include one of me, her other children, or a horse (she was an avid show jumper in her youth).

My younger sister is somewhat similar. She is a ferocious hockey player who trains religiously, yet she too limits her sport viewing to the Olympics (but I suspect that’s because it’s a good excuse to be allowed to watch TV in the morning before school).

I could have hardly been more surprised, then, when they both wandered into the TV room to watch the Matildas take on Jamaica in their last group stage match on a near-freezing Wednesday morning in suburban Sydney.

And any chance of Mum’s foray into football fandom being mere chance was dispelled when, after the Matildas’ loss to Norway, she called me from Wagga Wagga where my sister had been at a hockey tournament for the weekend and told me how she had served breakfast to the team in one hand while watching the Matildas on her phone in the other.

The reason for this sudden interest seems clear. I had spent plenty of early mornings watching football, including World Cups, unaccompanied. But there was something special about this Matildas game beyond the mere fact that it was a women’s team playing and not the men, and it drew my mum and sister in. 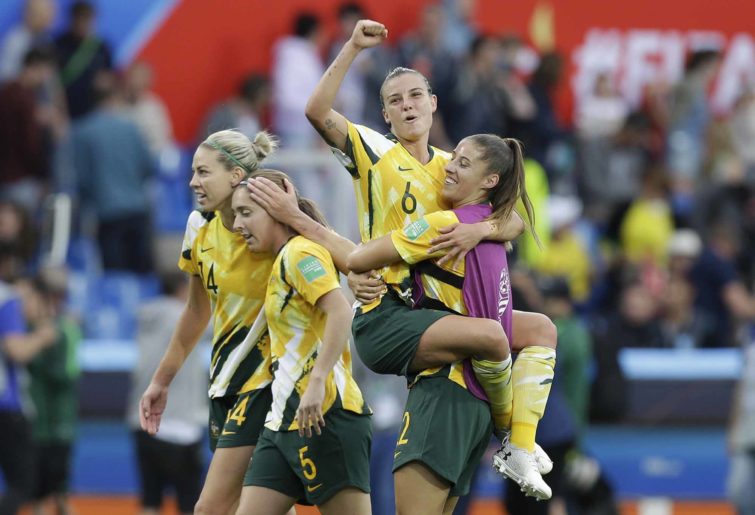 The impact of this something special has been felt around the world with some astounding numbers emerging over the course of the tournament as the momentum continues to build.

Bleacher Report’s ad revenue from this year’s Women’s World Cup is reportedly 10% higher than their revenue made from the Men’s edition of the tournament last year, while other reports coming out of the US confirm the same trend in TV viewing figures.

Though that may be because the US men’s team failed to qualify for Russia 2018, it shouldn’t undermine the enormity of this achievement.

In England, the Lionesses’ World Cup campaign captured the hearts of a nation, with upwards of 6.1 million people watching England beat Scotland 2-1 in their tournament opener according to the BBC. The men’s team only managed 1.2 million views for their Nations League third place play-off against Switzerland.

FIFA estimate that by the end of the group stage, half of all English people – just over 30 million – had watched at least one minute of the tournament.

These viewing figures in England are made all the more impressive when one realises that they’re directly competing against the Men’s Cricket World Cup, which England are hosting and are favourites to win.

Cricket is a traditional summer sport and a favoured national pastime. It ought to have dominated the football. And yet the Guardian is reporting that the Cricket World Cup barely managed 1.3 million views for England’s match against Pakistan.

Fans aren’t just watching their countries either – they’re putting their money down to show their support. Nike CEO Mark Parker reported last week that “The USA Women’s home jersey is now the No.1 soccer jersey, men’s or women’s, ever sold on Nike.com in one season.”

The Matildas’ iconic ‘spew’ jersey sold out in the men’s cut on the first day of sales on the FFA website and at Rebel Sport.

The interest in the game has encouraged football federations around the world to invest more in the women’s game. No longer can women’s football be put in the ‘no one cares anyway’ basket. Countries and corporate entities now have a massive incentive to unlock previously untapped markets.

The real test for women’s football is whether it can sustain this momentum. Important steps must be taken abroad to ensure the continued survival of the game. The Argentinian Football Association treated its women’s team with such contempt that they did not play a game between 2015 and 2017, and initially rejected the team’s request to be paid US$8.50 per day for training.

Back home, Australia prepares to mount its #GetOnside bid to host the 2023 edition of the Women’s World Cup and bring new energy to a weary W-League competition.

A new generation of girls will grow up inspired by their heroes, and whether they’re trying to score goals like Sam Kerr, save free kicks like Lydia Williams, or even just wear an iconic blue headband like Ellie Carpenter, the important thing is that their choice of role models will no longer be confined to the men’s team.

For those of us who worship at the alter of the beautiful game, this World Cup has been a phenomenal success.

OK, the FFA managed the Matildas poorly, and sure, the team didn’t always play at their best.