This week there was an article which tried to point out the statistics proving just how much Darius Boyd is struggling in 2019 at the Brisbane Broncos, in his first season as a player without Wayne Bennett as his coach.

It stated, “He misses more tackles than any other fullback in the game.

“He has scored only one try compared to Tedesco (8) and Nicoll-Klokstad (6).”

These statistics are being used in a manner which is completely foolish. Let’s start with the simple one first – tries scored. A player’s ability to score tries is not indicative of their ability, as on most occasions it requires a huge amount of teamwork.

Secondly, Boyd has rarely ever been a prolific try-scoring fullback. In fact, over the 14 seasons that he’s played in the NRL, he’s only bagged more than nine tries in a season on three occasions:

All stats following are only from games played at fullback. If we break down his try-scoring prowess, season by season, we can see that he struggles to register more than four tries a year in the number 1 jumper.

Next, we’ll look at his running metres, courtesy of the original article. While his number of runs is down on his career average of 11.95 per game, he is averaging 10.15 this year, which is better than the last two seasons. 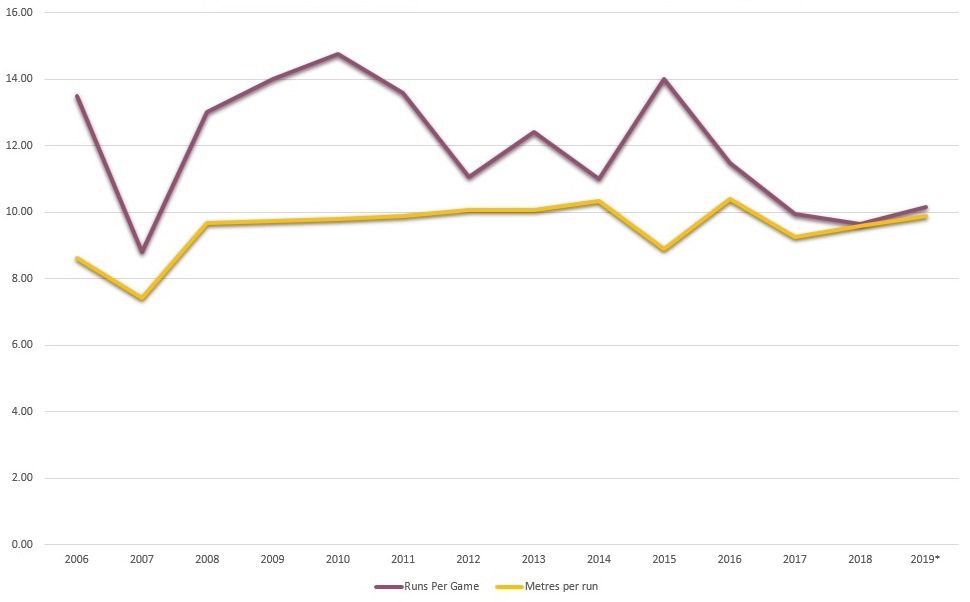 The final statistic to look at is his missed tackles. There is an increase over recent years, but he is still missing under two tackles per game, which isn’t as dire as it sounds. Also, not all missed tackles can be attributed to the failure of one player, which makes it a less-than-ideal statistic with which to criticise Boyd’s defence.

He is clearly struggling, but in areas that aren’t recorded statistically – decision making and commitment. It can be argued that he isn’t trying as much to effect or even attempt tackles at times this year, which can be partly down to slower decision-making that can impact his positional play in defence. 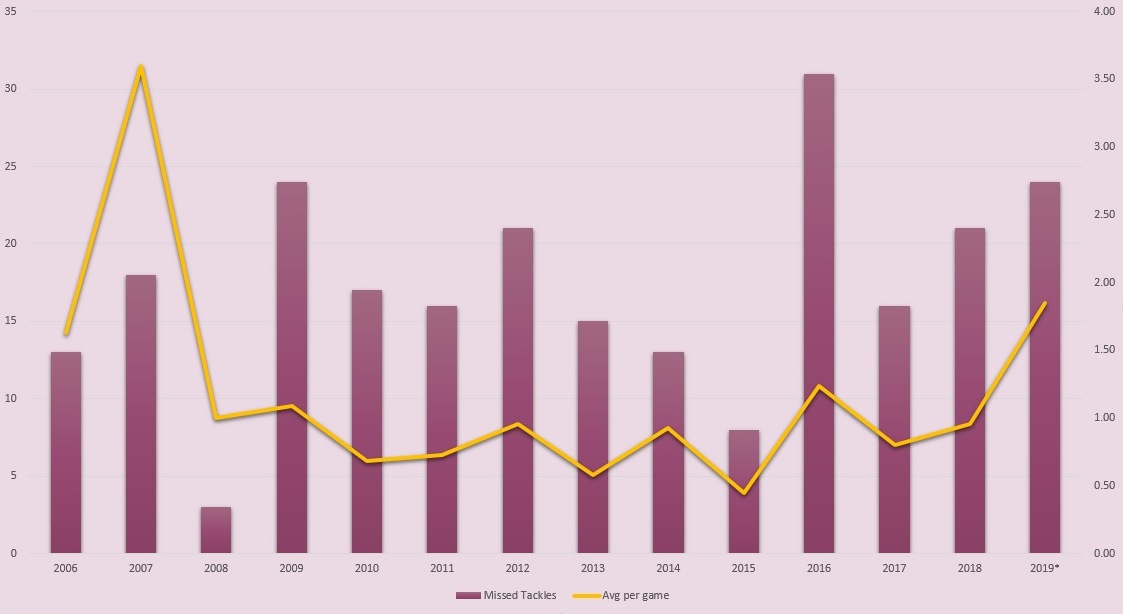 As we can see, statistically Boyd has been reasonably consistent and perhaps even better than in recent years.

Now we move onto the next aspect raised in the article, whereby he was compared to other fullbacks.

First of all, let’s look at tries scored, because that was oddly used as a metric to determine form.

What we can see here is the Boyd is more consistent, but that Tedesco, Tuivasa-Sheck and Kalyn Ponga are more erratic with their try-scoring.

All four are also making over 100 metres per game when playing at fullback, with Tedesco and Tuivasa-Sheck both having slightly lower averages this year compared to 2018, while Ponga and Boyd are improved.

Looking at the total metres gained per run, we can see that very little separates the quartet, and that all four also have very little fluctuation in their numbers.

Finally, we’ll look at missed tackle averages for the group, and here we can see that Tedesco and Tuivasa-Sheck are both worse this year compared to last as well – although all are missing under than two tackles per game.

Ultimately, there are plenty of criticisms to make about Boyd, but the statistics do not paint the whole picture. Sure, these graphs all show that he is less impressive than fullbacks who are all several years younger than him, but they will never show where the Brisbane skipper is struggling the most: between the ears.

Some may say it’s his body that just isn’t up to standard anymore, and defensively that may be right. Boyd is also going largely unnoticed in attack this year. His ability to draw the outside defender before passing wide is significantly lessened, his ability to break the line has dropped off, and his ability to break tackles is almost non-existent.

Too often this year he has drifted wide only to get tackled before passing, or throwing a poor pass, both of which effectively shut down any scoring opportunities. His line running lacks power, effectiveness or threat. Mentally he looks tired.

He needs a break – he probably wants one. He turns 32 in a fortnight, so he’s still got plenty left in his legs, but he just lacks the enthusiasm and possibly even interest to give what is necessary week to week in the NRL.

Moving him to five-eighth is not going to help him or the team. He needs to drop the captaincy and take a few weeks away from football to refresh and evaluate whether he wants to keep playing.

If he does, then bring him back on the wing. Make his job simple, put no responsibilities on his shoulders and just have him focus on a simple job.

Boyd’s so much better than this. If he decides to walk away, then he deserves to be recognised as one of the modern-day greats who could potentially find himself named in the Hall of Fame in years to come.