A wonderful cricket World Cup, a marquee semi-final match-up against the old enemy and a reminder that cricket fandom for many of us will likely never be the same again.

This is not intended as a middle-aged ‘good old days’ critique of the modern-day game.

After all, this has been a rejuvenating World Cup both for cricket and the reformed Australian cricket team’s place in it.

But rather a celebration of a riveting perfect storm which raged for almost two decades until its unforgettable 2005 crescendo in English summer skies.

For Australians born in or around 1980 with a penchant for bat and ball, this formative period defined cricket as we knew it.

A blessing with one curse, a wholly unsustainable baseline for our future cricket fandom.

Not that you’d take it back, not on your life.

Those slightly older may have memories of Australia’s 1987 World Cup win, and a radiant ‘Captain Grumpy’ – Allan Border – being chaired around Eden Gardens with trophy held aloft.

This was a time of new frontiers, breaking down walls previously thought impregnable.

Epic Test series victories against the all-conquering West Indies in the Caribbean in 1995 and India on the subcontinent in 2004 stand as towering achievements, even for a team of giants.

Picking out individual players for praise from a line-up of champions is ordinarily a fraught exercise. That is unless you were blessed with two cricketing ‘unicorns’ that revolutionised the game as we knew it.

Shane Warne was a contemporary Don Bradman, he just happened to be a leg spinner and a blindingly colourful character.

Adam Gilchrist must have missed the wicketkeeping qualification memo, which stressed spikiness and a batting average of 25. A gentleman, Gilchrist was T-20 dressed in white and the most entertaining batsman we’d ever seen.

An era is made up of thousands of moments, a golden one is defined by how many of them are iconic.

Warne’s ‘ball of the century’ to Mike Gatting in 1993, Steve Waugh going toe-to-toe with an irate Curtly Ambrose in Trinidad in 1995 and then notching that last-ball century at the SCG in 2003, and Allan Donald’s 1999 World Cup semi-final run-out are just some of the sparkling jewels in this cricketing crown.

But it wasn’t all smiles and overflowing bubbly. Memories of failure from this period are as indelible as those of triumph, and yet they somehow perversely enriched our experience.

Think Craig McDermott (supposedly) edging one behind against the Windies at the Adelaide Oval in 1993, the nation scolding Damien Martyn for his infamous 1994 cover drive against the Proteas at the SCG or Australia’s upset loss to Sri Lanka in the 1996 World Cup final.

And the piece de resistance, the 2005 Ashes.

It all started with a first Test victory for Australia that screamed ‘here we go again’.

Little did we know that we were about to ascend into cricketing nirvana.

From Andrew Flintoff consoling Brett Lee after the thriller at Edgbaston to Ricky Ponting’s fourth Test substitute fielder-induced meltdown, it wanted for nothing. 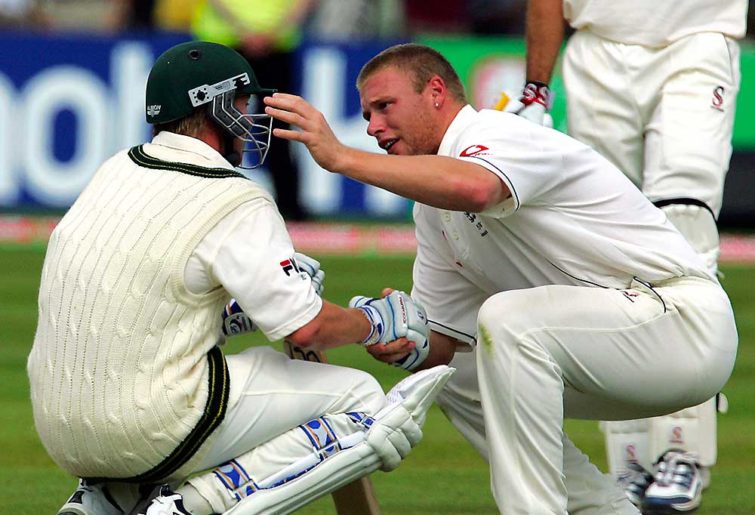 One of Test cricket’s most famous scenes. (AFP PHOTO/ALESSANDRO ABBONIZIO)

And then the final day of the fifth Test, as our privileged expectations raged against an increasingly grim reality.

On reflection, this series can be seen as our generation’s cricket supporting swan-song.

According to ancient lore, a swan sings a beautiful song just before it’s death.

So enthralling was that contest, that when it ended amid English jubilation at the Oval we knew we could never go back.

Perhaps we might approach this point of cricketing transcendence again one day, but we will be older then and it will never be quite like it was.

And it wasn’t just about those epic five Tests, it was the fact that it represented the perfect finale to the compelling period that preceded it.

A series which negotiated the finest of lines between our love for that Australian team and our perverse desire – borne of sustained supremacy – to see it challenged by a worthy foe.

It also marked the beginning of the end of our hero-worship for the national team. Unconditional reverence for our winning ways gradually replaced with a cultural cringe as to the means, as Australia lurched from one PR disaster to another in the years that followed.

But now we appear to have a more supportable green and gold incarnation, having been suitably humbled by the sandpaper-gate nadir.

And we await a blockbuster semi-final against the mother country at Edgbaston.