It's time for Glenn Maxwell to step up

His performance has to heat up as Australia enters the finals.

Yes, he boasts the third highest strike rate in the tournament and is the best of the Australians at 163.1.

But unfortunately that strike rate has been accumulated across an aggregate of just 95 balls from nine innings during which he has scored 155 runs at 22.1.

Facing on average just ten balls each innings is simply not good enough regardless of the strike rate.

When I outlined those stats on social media a few days back I was met with some responses along the lines of, “He hasn’t had a lot of opportunities”.

I have seen similar comments elsewhere.

They are blatantly wrong.

Maxwell has had ample opportunity to go big – not by distance of shot, but by the number runs on the scoreboard.

His first appearance of the tournament against Afghanistan was always going to be brief as he struck his only delivery faced to the boundary as Australia secured a comfortable victory.

The only innings where he was dismissed inside the last few overs was against Bangladesh when he was run out for 32 off ten balls in the 47th over.

In his other innings, he has squandered opportunities when time and overs were on his side.

Against the West Indies he was out in the 8th over; the 41st against India; the 34th against Pakistan; the 39th against England; the 22nd against New Zealand; and the 25th against South Africa.

In those matches he had the chance to build an innings.

There was no need to go full throttle from ball one.

His dismissal against the West Indies was his nadir, coming when a responsible and watchful knock was needed.

He fell to a top-edged pull shot off a bouncer from Sheldon Cottrell – the second ball he had faced – leaving Australia teetering at 4-38.

The scoreboard demanded that that was not the shot to play but play it he did.

Aaron Finch has used him at various spots in the order.

He came in at number five in the first three matches before alternating between there and number four in the next four games.

In his last two innings – against New Zealand and South Africa – he was held back, coming in at number six.

It was perhaps a sign that the camp was concerned about his approach when time was not an issue.

In the latter stages of the preliminary round he was exposed by some heady fast bowling.

Against England, he was caught behind off Mark Wood while attempting to run a bouncer to third man.

He was out to a top-edged hook shot off Kagiso Rabada in the game against the Proteas.

Safe to say when he comes to the centre in his remaining appearances the opposing skipper will turn to his principal strike bowlers in an endeavour to rough him up. 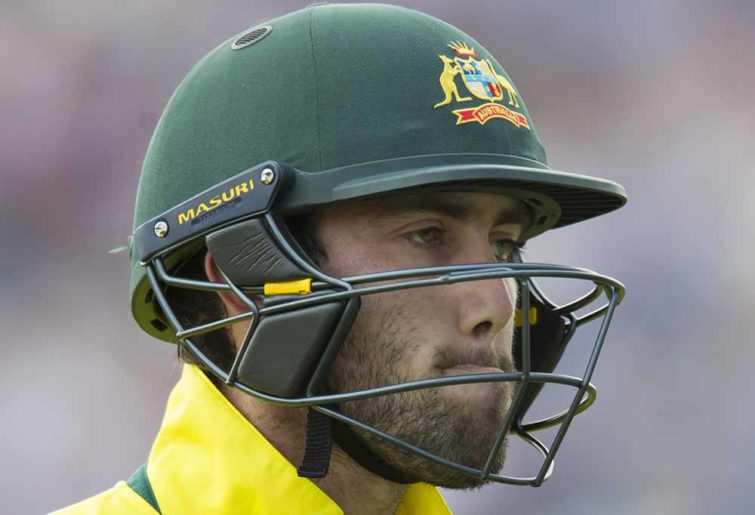 Glenn Maxwell has a different path to the Test side than Matt Hayden ever did. (AP Photo/Jon Super)

Given the order of the call-ups as members of the squad have fallen to injury it appears likely that Peter Handscomb will get the nod ahead of Matthew Wade for the spot vacated by Usman Khawaja due to a hamstring strain.

With Marcus Stoinis suffering a second side strain in a few weeks in the loss to South Africa Mitchell Marsh will probably suit-up in the semi-final against England.

It then remains to be seen how Australia will structure its batting order.

Finch and David Warner should be followed by Steve Smith, who must surely move to number three.

The former skipper has had a modest World Cup – his nine innings producing 294 runs at 32.7 with a strike rate of 91 – but now is the time for him to take the pivotal first drop position.

Handscomb will slot in at four and from there it gets interesting.

Alex Carey has been a revelation at number seven.

He has been totally unfazed while accumulating 329 runs at 65.8 on the back of a strike rate of 113.

There have been calls for him to move up the order, some saying as high as number five.

For me, it should either be Carey or Marsh at five with the other at six.

I would be holding Maxwell back for the last dozen overs or so. 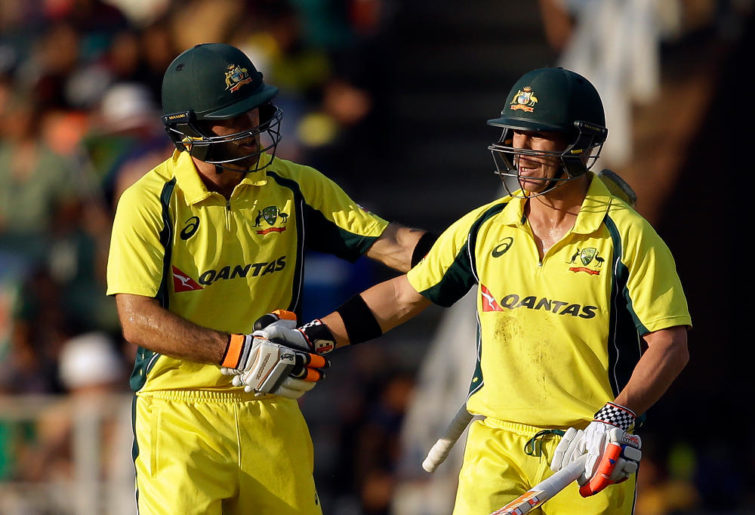 He could still be used as a floater if the top order gets off to a flyer and bats deep into the innings but given the way he has imploded when given significant overs to face I would be holding him back towards the end of the innings.

Wherever he bats, he has to be more selective in his approach if he does come in with ample overs remaining.

Ten to 15 ball cameos in the semi-final and decider – should Australia get there – will see him depart England having had minimal impact on the tournament.

His bowling has yet to provide a wicket with his 49 overs producing 0-295 with an economy rate of 6.0.

But it his batting that is the most important ingredient for Australia.

The time has come to display his wares on the biggest stage by mixing controlled aggression in concert with the state of the game.