Test match shirts: A game of letters and numbers

Mark this date down in your diaries, the day that the traditions of Test cricket were needlessly destroyed by the greedy governing bodies.

Now, it should be noted that many changes have been made and after much uproar, been accepted. These changes have been mostly for the betterment of the game as a whole. Not, as the recent change is, the destruction of tradition for the sake of the T20 crowd.

It might seem silly to complain over a seemingly trivial thing such as the addition of players names and numbers to the Test whites, however, one would be naïve to believe it is an exercise in making identifying players easier.

Cricket Australia, the ICC and the ECB should all be ashamed of the disgraceful marketing ploy that has been exhibited by the Australia A team in England.

For 142 years, true fans of the sport have been able to enjoy the simple, traditional look of a relatively untouched shirt, with a few relatively discreet sponsors logos placed on the shirt.

For 2351 Test matches, fans have been able to identify players with very little worry, either from in the crowd or at home watching on the TV.

There has been no complaint from fans that they couldn’t not identify players easily, indeed, I have always enjoyed the uncluttered nature of the Test shirts and the simplicity that is ever harder to come by in today’s world.

I would emphasise a Twitter comment here; “There’s a reason the old way lasted 142 years, it’s beautiful in its simplicity. Stop changing things that work.” Perfect to state the obvious, just because you can, doesn’t mean you should. 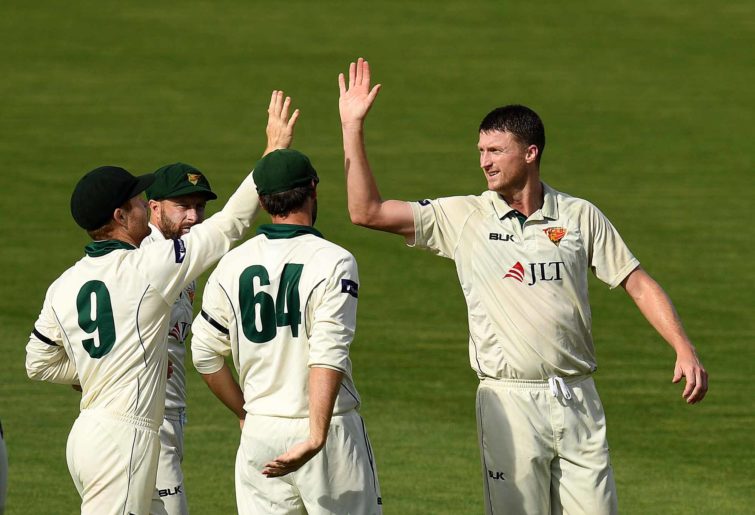 Steve Waugh introduced a great thing to players shirts, and that was the embroidering of the players baggy green number onto the shirt, to remind them of how special it is to play for Australia.

So, it begs the question, will someone like Tim Paine be remembered as Australian Test Player No. 414 or as No. 7?

I know I would rather be remembered as the former, as it is a number only you will ever have, not something that will be shared. Who knows who the next great No.7 will be? I mean that in shirt number, not batting order. More confusion.

There are eleven players in one Test team during a match, so surely having numbers up to 99 is ridiculous! It looks clunky and not neat at all.

I know that I am not alone in regards to this decision, as I read through all the comments on Twitter in reply to CA’s announcement and very, very, few of them supported the changes genuinely, with well over 90 per cent voicing adamant contempt.

“So, I am assuming this idea occurred like this:

“Better pitches to create a contest” “No”

“Oh I know, names and numbers on the back?!”

“HECK YEAH!” *Pats on the back and high fives*”

This just highlights that while there are major issues that need addressing such as the poor over-rates and flat roads which produce boring contests.

This comment just shows the backward priorities of the governing bodies who want more and more money by targeting the audience who don’t care about the true spirit of the sport, and in the process, ignore all the major issues currently facing Test cricket.

Another such one was: “Awful. Why walk away from decades of tradition. Cricket Australia seems intent on being an insular organisation that doesn’t listen to public sentiment about the state of the game.

I think those two comments perfectly captured many fans feelings about the governing bodies. When one thinks of Test cricket they think of the traditions, the almost innocence of a sport that has lasted for 142 years without being completely exploited for marketing purposes unlike other sports and formats such as T20 and football.

I also support the comment hoping that they will bowl in the woollen sweaters, as these look very traditional and would cover up the disgraceful marketing tactics.

Another comment stated;
“The younger generation has T20. Test match cricket is about tradition”

Clear and simple, the ICC and Co. wish to attract new fans to cricket, but they have done this with T20 cricket, the younger generation, of which I am a part of, find Test cricket boring, there isn’t enough sixes, not fast enough. I find Test cricket enthralling, and I often find T20 a cheap substitute.

Surely if the younger generation or new fans wish to follow Test cricket, they can do so by appreciating the traditions and simplicity of Test cricket, the innocence of a game that should not be exploited to bursting by marketing.

If the younger generation are unable to appreciate Test cricket, they have T20’s and that despicable format, ‘The Hundred.’

One would hope the sanity would prevail and the MCC would see the outrage from fans and request, even rule, that this be outlawed.

It is ludicrous to suggest that Test players are unable to be identified, as they have a great deal more exposure than those who play county cricket and Sheffield Shield where identification would be helpful.

But it should be suggested that numbers mean less than names, unless there is a little legend somewhere telling you who each number belongs to.

But I digress, I would certainly hope that those players who oppose this ridiculous and completely unnecessary change would wear some other kit over the top of their shirt to protest against this selling out for marketing.

Maybe it is time for another World Series cricket, this one not about money, but about standing up to the governing bodies and protecting the true nature of Test cricket. So, I urge us all as fans to stand up against this disgrace! With the support of the players who oppose this marketing sell out, we must revolt if we can.

I wish that I was able to boycott the Ashes, but I love the game too much. Hopefully one day we will be able to say to the ICC and Co. “Viva la revolution!”