I last met ‘Ted’ in the rugby-rich surroundings of Cardiff’s Angel Hotel late in 2018. We were chatting eagerly in our catch-up, but when the wine arrived we just fell silent and watched. There was nothing but quiet, attentive reverence as the waitress uncorked a fine vintage from the Malma family in Patagonia. It was worth the wait.

My last supper with the England coaching group in 2015 was at the Buenos Aires Argentine Steakhouse in West London. The beef in that place was so tender you did not need a knife to cut into it. The fork was enough. The flavour had melted into your nostrils before the meat ever reached your mouth. I have never eaten a steak like it, before or since.

We did not know it at the time, but the members of that coaching group were about to become the wild geese of the English game, spread far and wide across the rugby world. After the catastrophe of the 2015 World Cup, Stuart Lancaster left on a year-long tour of the southern hemisphere, Andy Farrell went to Ireland, and Mike Catt was offered a job with the Azzurri in Italy.

Now all three, plus forwards coach Graham Rowntree, are coaching in Ireland – either for Leinster, Munster or the national team.

Perhaps the Argentine connection is contagious, because it is not only its fine beef and wine that the country habitually exports. Some of the highest-quality rugby talent in the world has found a haven in rugby ports as diverse as Australia and Italy – but it originated in Argentina.

The two most influential scrum professors in the Australian game – Enrique ‘Topo’ Rodriguez in the 1980s and Patricio Noriega in 1999 – were indelibly associated with periods of Wallaby dominance in the international game. Both started out as tighthead props for their country of birth but finished life as Wallabies.

The best side in Italian rugby history was steered expertly around the field by Diego Dominguez, who played twice for Argentina before representing Italy for 12 years, piling up 74 caps between 1991 and 2003. When he finally retired, Italy tried to conscript another Argentine, Ramiro Pez, to replace him.

Over the next generation, the Azzurri scrum was anchored by Martin Castrogiovanni, born on the Parana river standing opposite the city of Santa Fe, and Carlos Nieto, a native of La Plata. Nieto played his club rugby with Gloucester, ‘Castro’ with Leicester Tigers in the English Premiership.

They formed one of the most feared propping duos in the league – and if it is one thing the Welford Road faithful know, it is their front rowers. Castro was taken to heart and became one of their own, a legend at the club.

The top Argentine players in two key positions – outside-half and tighthead prop – have ended up playing most of their football abroad, and frequently for other nations.

Juan-Martin Hernandez played in Paris for virtually his entire career, and Nicolas Sanchez followed in his footsteps at Stade Francais after leaving the Jaguares. The next best Argentine number 10, Benjamin Urdapilleta, has been the centre pin of the Castres club for the past four seasons. 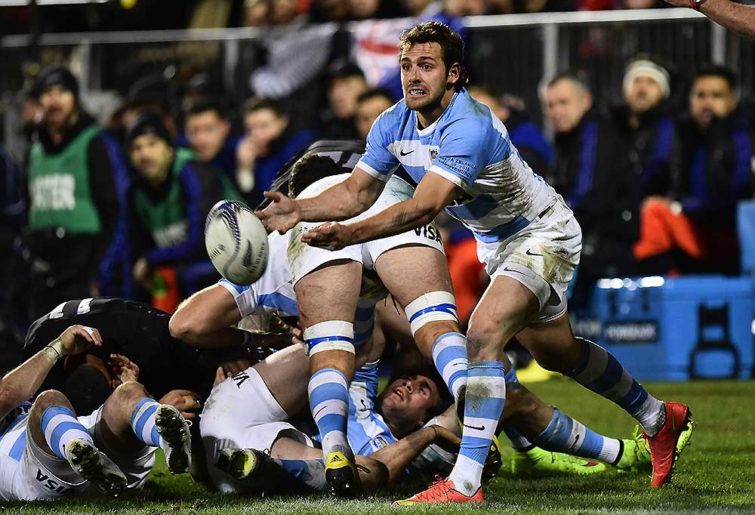 At tighthead, the foremost operators are Juan Figallo, who has been beset by injury in his five years for Saracens in England, and Ramiro Herrera, who like Sanchez plays for Stade in Paris.

And therein lies the problem for Argentine rugby as a whole. Once the geese have flown, it has been a struggle to get them back again. It is only recently that the regulations governing the selection of overseas players have been relaxed so that the current Pumas coach, Mario Ledesma, can now pick the likes of Figallo, Herrera, Sanchez and Urdapilleta for his World Cup squad.

On the evidence of the Super Rugby final between the Crusaders and Jaguares, he sorely needs all four of them. The Crusaders won the game by exploiting the weak links in an otherwise very solid-looking Jaguares line-up – tighthead Santiago Medrano and outside-half Joaquín Díaz Bonilla.

The game provided the model example of what happens when all of your top rugby expertise in specialist positions leaves the country – there is no ‘top-soil’ of knowledge left to nurture those coming up behind them.

Medrano was lucky that he was supervised by a scrum referee as insouciant as Jaco Peyper. The Crusaders ended up winning the scrum penalty battle by five to one against the Jaguares, but it could have been far, far worse if Medrano had been policed more strictly.

Whenever Medrano felt the pressure coming through from the All Black opposite him, Joe Moody, he tended to stand up and stop the contest before it had even started: 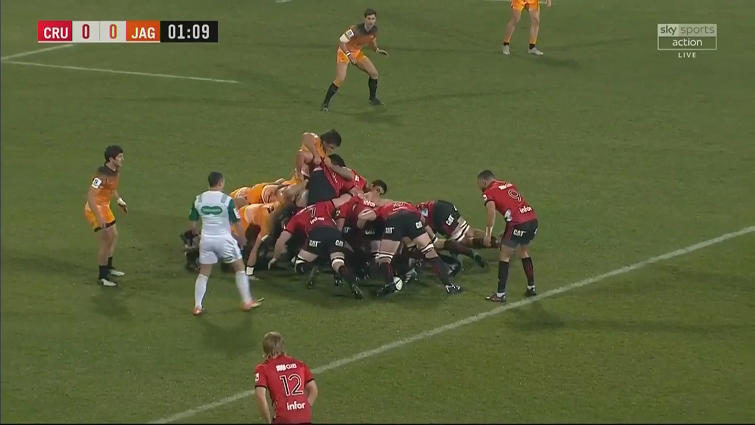 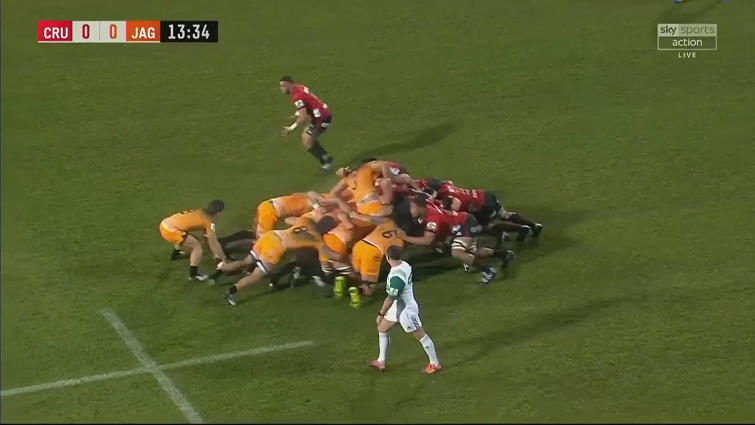 At situations close to your own goal-line, there is nowhere to hide however, and Medrano suffered the ultimate indignity of being lifted right through the roof of the scrum by Moody:

Although both have been picked for Mario Ledesma’s World Cup training squad, neither of the Jaguares prop replacements (Mayco Vivas and Enrique Pieretto) possessed the technique to repair the damage:

Topo Rodriguez and Patricio Noriega would be shaking their heads in despair at what has happened to their successors in Argentina’s most cherished position on a rugby field.

The same was also true at outside-half, where the decision-making and skill-execution of Joaquín Díaz Bonilla collapsed completely under the blowtorch pressure applied by the Crusaders defence.

The problem arose because Bonilla is not a 10 who naturally takes the ball to the line with his first step. On the two occasions that he did attack the advantage line himself, he first lost the ball at the tackle, then delivered an offload which was knocked on by his support.

When Bonilla tried to play flat, and either pass or kick for the runners outside him, the results were not propitious:

Whether passing across the face of an aggressive defence or kicking behind in behind it, Bonilla’s discomfort is palpable.

By the beginning of the second period, he had begun to revert to type and sit deeper behind the gain-line:

Even though the Jaguares have just won turnover ball, Bonilla is standing at least ten metres behind his scrum half, and when Pablo Matera receives the ball on the end of the third pass, play is back on the Jaguares’ side of halfway.

Even from such deep-set positions, Bonilla was unable to engineer an effective kicking game against the Crusaders’ backfield:

Only one of Bonilla’s eight upfield kicking attempts (which had been so crucial to success against the Brumbies) had a positive outcome in the final.

When an outside-half’s confidence with the ball in hand begins to crumble, it also tends to affect every other area of their game, and this was certainly the case when the Crusaders began to target Bonilla with high kicks of their own in the second quarter:

The Crusaders counter-ruck over the top of the Jaguares outside-half to win turnover, and it soon became evident that he had been picked out for special attention.

On the second occasion, Bonilla was first held up by the chasers then robbed by Matt Todd. That, in turn, enabled Kieran Read to scoop up the turnover ball and initiate the only try of the game:

Summary
2007 still represents the high watermark of Argentine World Cup performance, with the Pumas beating France, Ireland, Scotland and France again in the third-place play-off, only losing to the eventual winners South Africa in the semi-final.

Seventy-eight per cent of that Argentine squad was based in Europe, with 51 per cent at clubs in France. Only one of the starters against the Springboks plied his trade in Argentina. In those days, the wild geese never flew home.

Sir Graham Henry’s stint as a mentor to the Pumas coaches marked a period of reconstruction, with a national high-performance program instituted after the 2011 tournament and the Jaguares founded four years later.

At the time, Ted observed that “Argentina’s entry into the Rugby Championship, to play against the three best-placed teams in the world ranking, is a big challenge. So it’s understandable that this new challenge should have sparked a change in the UAR structures and the development of their high-performance plan.”

The challenge of consistent success in the Rugby Championship remains as elusive as it was back then, with the Pumas having won only five out 39 fixtures in the tournament since 2012. 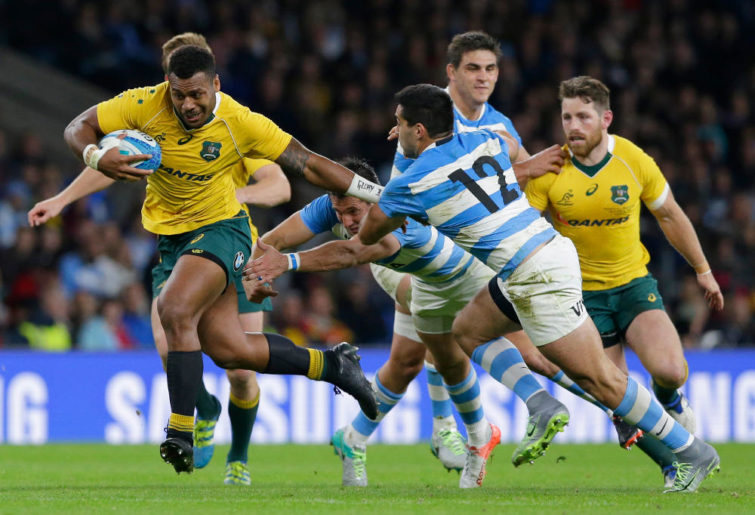 In this context, the Jaguares’ achievement in becoming the first home-based team to reach a Super Rugby final is an optimistic green shoot of growth.

The complexion of the problem has changed, rather than achieving resolution. It is now a question of how to reintegrate Argentina’s finest rugby exports into the new structure, and how to incorporate their knowledge to fertilize the growth of the young players coming up behind them.

The majority still play in France and suffer from the minimal international release characteristic of the Top 14, where club is king.

Others, like Juan Figallo, have found their careers stalling, or even withering on the vine. Figallo was a king among tighthead props when he went to Saracens in 2014, but he has never become the undisputed starter at his position, despite his world-class ability.

The cracks in the existing structure were all too evident in the Jaguares’ courageous loss in the Super Rugby final, where a lack of experience and know-how in the front-row and at outside-half was painfully obvious.

Ultimately, the exclusive nature of the club scene in England and France represents just as much of a threat to the harmonization of a national program in Argentina as players opting to play for Australia or Italy did in an earlier era.

There has to be a closer and more consistent connection between the Figallos and Herreras of this world, and the Medrano’s and Pieretto’s; between Nicolás Sánchez and Joaquín Díaz Bonilla, for the program to work and knowledge to be handed down meaningfully.

As long as emerging nations are hamstrung by an Anglo-French club environment which wants to both have its cake and eat it, we will all be tucking into steak and quaffing Malbec without ever understanding its provenance – and watching rugby nations like Argentina without ever experiencing them truly on their own terms.