My previous output of MMA content saw the staking of my non-existent reputation on a series of predictions, most of which were validated; however, this article will see judgement offered in retrospect on the five main takeaways from recent proceedings in no discernible order.

Moving swiftly on to the matter at hand and away from any personal promotion, the UFC put forth one of their best showcases of mixed martial arts of this calendar year and there are broad repercussions to digest and discuss.

This past Sunday (for Australian viewers) saw a range of memorable finishes and engaging contests going to razor-sharp decisions that placed an exclamation point on the fanfare of International Fight Week. Let’s dive in.

Round 1: Jorge Masvidal just became one of the UFC’s most popular fighters
Despite me stating this article’s structure will not involve a discernible order, there is simply no other place to discuss Cuban Jesus’s performance and his ascension to the forefront of the welterweight division.

And what a performance it was, demolishing the previously undefeated wrestling phenom Ben Askren in an unprecedented five seconds, punctuating their highly publicised bitter rivalry.

Entering his 47th professional bout and 17th in the UFC, not even mentioning his involvement in the infamous Kimboslice-led backyard brawls, Masvidal had proved to be incapable of breaking into the upper echelon of the company’s top stars.

Whether it was his lack of media exposure, seemingly untapped potential or spotted split-decision losses over his career, men of far less experience had far greater notoriety than Gamebred. Of course this all changed with perhaps the most picturesque flying knee ever delivered.

His FIFA-inspired post-fight celebration, abrasive honesty and unrelenting cheeky grin all pointed to one conclusion: Jorge Masvidal is now a pay-per-view draw. Stopping the ascension of both Darren Till and Askren was one thing, but in an era of Conor McGregor-wannabes with carefully curated social media profiles, Masvidal refreshingly cuts through as simply a fighter.

Even if Dana White disappoints the masses and refuses to reward Masvidal with a shot at Kamaru Usman’s strap later in the year, you can be assured that the masses will flock to his next outing, whoever it’s against, let’s just hope this unseen level of competitive vigour can be maintained. All aboard the Jorge hype train.

Round 2: The next challenger to Jon Jones is unclear
Despite Jon Jones’s battle with Thiago Santos being perhaps the closest of his career – at the very least since his first fight with Alexander Gustaffson, in which he even lost the fight on one of the three judge’s scorecards – the sea of contenders still remains murky.

With Jones seeking to be as active a champion as possible and Santos on the shelf with a torn ACL, MCL and meniscus suffered in the fight, the option of simply running it back is seemingly out of the question until next year at least.

After previously being a division devoid of credible contenders, the emergence of a bevy young talent was been rapid in 2019. However, while the rise of Dominick Reyes, Johnny Walker and Alexander Rakic is exciting for the sport, they share the deeply unfortunate situation of having to gather enough credentials to viably challenge the pound-for-pound GOAT.

Assuming Jones’s next title defence is in the vicinity of three or four months, the rate at which he’s been keeping up since organising his troubled personal life, the opportunities for the aforementioned light heavyweight contenders to bolster the fighting resumes are few and far between.

Well, as my subheading would suggest, that’s a question without an answer for the moment. Jones’s positioning atop the sport and unrivalled collection of discarded opponents means that the most logical option would be the current pound-for-pound top-ranked fighter, and bitter enemy, Daniel Cormier.

But questions remain over whether Cormier will remain champion with an upcoming fight against Stipe Miocic. If Cormier loses, does the third fight against Bones hold the same weight, not to mention the issue of which fighter will move weight division if at all.

The ensuing months are certain to be highly revealing at the top end of the sport. 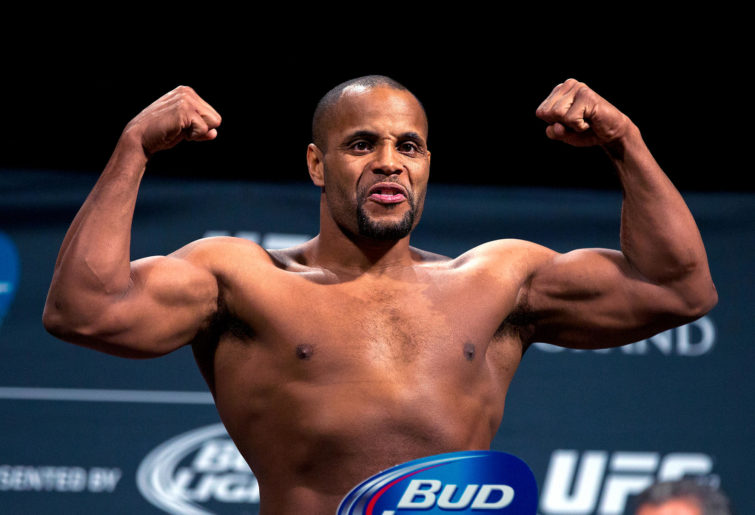 Is Daniel Cormier next in line? (L.E. Baskow/Las Vegas Sun via AP, File)

Round 3: The kids are coming
The star power of Jones and Nunes, as well as the unforgettable knockout of Askren, seems to have understandably overshadowed the presence of some of the sport’s best young talent on the card.

Under the same tutelage as Ronda Rousey (make of that what you will), Edmen Shahbazyan has quickly ascended to become one of the most talked-about prospects in the middleweight division, further validated with his most recent win over proven journeyman Jack Marshman via first-round submission.

Shahbazyan has now amassed nine first-round finishes in his ten professional fights, all before his 22nd birthday, consistently showcasing a deep arsenal of techniques, and will likely draw a ranked opponent in his next bout.

A pair of featherweights also certainly caught the eye of intrigued fans and UFC matchmakers alike, as Arnold Allen and Yadong Song improved their records to 15-1 and 14-3 respectively.

Allen has been frustratingly inactive in the past but is now on an eight-fight win streak and beating Gilbert Melendez still holds weight despite being in the twilight of his career, also making it likely that his next opponent will be ranked.

Despite Song’s vastly experienced record at the meagre age of 21 is sure to arouse suspicion among cynical corners of MMA fandom, it cannot be queried that his attributes are eye-catching especially within the featherweight division.

The ascension of young prospects may be one of the lesser narratives taken away from Sunday, but I urge you to keep an eye on the progression of the aforementioned fighters.

Round 4: The careers of Luke Rockhold and Holly Holm are at a crossroads
Love him or hate him, Luke Rockhold’s run at middleweight and eventual championship win in 2015 was undeniably impressive, and now, a distant memory.

Jan Blachowicz was intended to be a divisional stepping stone for Rockhold on his path to a showdown with Jon Jones, looking to avenge the losses of American Kickboxing Academy teammate Daniel Cormier.

Unfortunately for the Ralph Lauren model, he was tripped up by the stepping stone by way of a crushing left hook, raising questions over the durability of his chin as it makes three crushing knockouts in his past four fights.

When a divisional shift backfires in such tremendous fashion, uncertainty over Rockhold’s future is certain to follow, sentiments echoed by Dana White in the event’s aftermath. Whether it’s at light heavyweight, middleweight or on the runway, let’s hope that there are less broken jaws in Rockhold’s future.

Whilst some cold-hearted fans are certain to revel in the failure of Rockhold, the downfall of Holm will bring far more emotional turmoil. Suffering the first KO loss of her mixed martial arts career at the age of 37 is likely to bring forth an evaluation of her future in the sport.

Holm has now lost four of her last six, and despite four of these involving belts of various divisions, there is now a justifiable narrative that she is perhaps no longer up to it at the top level.

Whilst the mountain to the championship seems insurmountable for Rockhold across multiple divisions, this is fortunately not the case for Holm, despite the undefeated Aspen Ladd breathing down her neck, if she can rediscover her best another title shot in the near future is not yet out of the question. 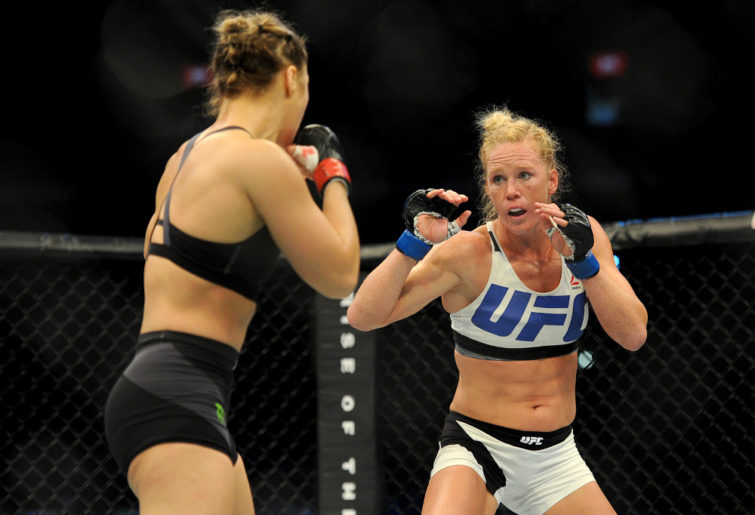 Holly Holm will be evaluating her future in the sport. (AAP Image/Joe Castro)

Round 5: WMMA GOAT Nunes is coming for your belts
While the increasing desire of fighters to become multi-division champions may be wearing thin among fans, the unbelievable dominance of Amanda Nunes can’t help but make the casual observer think, ‘Why not three belts?’.

Nunes has now won nine straight fights with seven finishes, reigning over two weight divisions with an iron fist – as well as feet, as Sunday illustrated – as she slew Holm with her own weapon of choice.

She’s already been a fixture at bantamweight, and when referring to such a special athlete one must ponder whether she could manage to cut down to 125 pounds.

It is certainly a pipedream of sorts, but after watching Valentina Shevchenko massacre Jessica Eye at 238 with an equally destructive high kick, the possibility of Nunes vying to become a three-division champion is a mouth-watering proposition.

Nunes has discarded every would-be challenger with contempt, putting her in a similar position to Jones with no clear next opponent in sight. I may be certainly stretching the logical likelihood of the match-up with Shevchenko, but the possibility of a historic accomplishment seems more than worthy of such treatment.

And that’s that – 239 in the bag with the key implications unpacked and arranged, and 240 is already on the horizon as Blessed returns to the octagon in the featherweight division. Whether it’s previewed or reviewed I do not know; I’ll just be excited for now.