Billy Smith was getting on. The halfback was in the sunset of his career and playing reserve grade for the famous Red V.

It was how things sort of rolled in the Olden Days – “Grade” footy was three grades. Blokes would go up and down, play seconds, play thirds.

Clubmen would hang around into their mid-to-late 30s, rolling onto the field, mentoring young blokes to play and fight and drink.

It clanged for some, though, that Smith was playing down. In his prime he was the premier No.7 of his generation. He formed a potent combination with the Immortal Graeme Langlands.

He played 26 Tests for Australia. He played 17 times for NSW Firsts.

He would play 296 games across all grades for the Dragons, a club record that will stand forever.

He was a gun, Billy Smith.

Yet there he was, might’ve been 1976, playing thirds and reserves for the Dragons when a young journalist called Mike Gibson sidled up to him in a pub (Billy loved pubs) and asked: “Billy, you’ve done everything in footy, why would you be still playing lower grades? Doesn’t it feel like a step down?”

Gibson was thinking, as journos do, of “story”. Of Smith’s “legacy”; his place in the greater schema of history.

Smith wasn’t thinking that. If he was worried about anything it was whose shout it was.

He turned to Gibson and said:

It was that simple – the man just enjoyed playing. Why not keep doing it?

As it was for B.Smith, so it is for the great Cameron Smith. When asked of his motivations at a recent press conference to talk up his 400th game – at AAMI Park against Cronulla on Saturday night – he said it was just because he enjoyed it.

Of the many elements that make up the champion’s longevity and ridiculously-consistent excellence is that he just enjoys doing what he does.

And not just the games, because of course they’re enjoyable, being physical and sweaty and fun, and played on the game’s greatest stages. 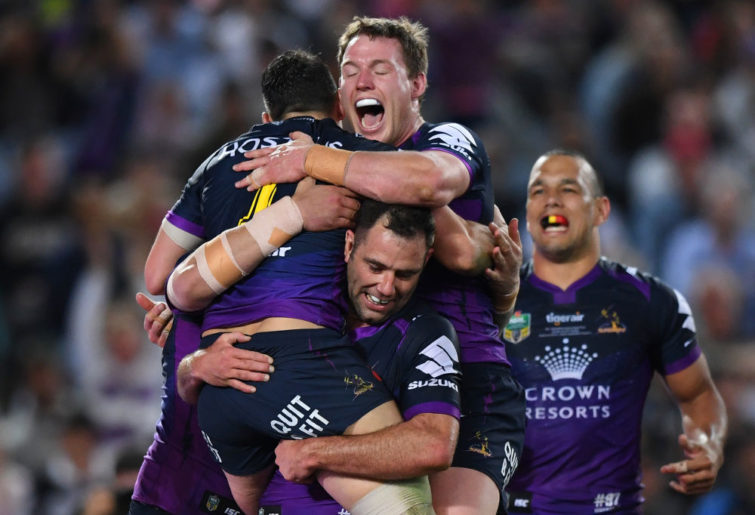 The endorphin-fuelled buzz of tearing out for your team or bolting away for a try while 80,000 people yell “Go!”, well, did Jimmy Tedesco look happy Wednesday night? Does our prime minister feel the power of the Great Inventor?

You bet he does. And Tedesco beamed like so many happy clappers in rapture.

But Smith loves footy more than just playing footy. He enjoys training. He enjoys weights. He may even enjoy sitting in an ice bath and making gags about his poor shrivelled bits.

Smith enjoys all the bits of footy, even the repetitive drudgery that goes into a week of preparing for a game.

Few years ago I did a story on him for Inside Sport, it was 2013. It was a period in rugby league when the evils of “the wrestle” were a bit of a thing.

Every club had a Brazilian jui-jitsu guy who was teaching blokes chicken wings, crushers, all that.

Anyway there was a Test match in Canberra versus the Kiwis. And for this story I took a mate along, “Hilly”, a judo expert I’d played footy with. And we sat there and just watched Smith.

Hilly had played (fought?) judo for Australia. His whole family had. There are nine of them, all Australian champions in various weight divisions.

They could throw you out a pub with a flick of the wrist. Sometimes they did, for fun.

Anyway, there’s me and Hilly, and we’re just watching Smith and all the little subtleties of his game. All the understated, perfect, effective little moves.

Little dart from dummy half.

No look ball inside for Billy.

He did it all and did it the best a man can do.

And a big part of his game was his wrestle. He was the weediest dude on the field yet the standout best at using his weight and subtle, wiry strength to put guys in various positions.

A wrist-lock here, a chin turn there, a little finger bent just into pain.

You may call it “grubby”. My man the judo guy wanted to recruit him.

“If Cameron Smith were to retire from rugby league immediately,” said Hilly, “he could immediately move into competitive judo. He’d be straight into blue belt.”

You wonder if Smith knows what he’ll do when he’s done. How he’ll feel. He’d wonder himself.

Perhaps even fear it; the great abyss, the void of “nothing” when he can no longer run out onto those huge arenas and rip off the manoeuvres that have marked as among the greatest – if not the greatest – rugby league players there have ever been.

He may never stop playing.