Hazlewood is bowling himself out of the Ashes

Josh Hazlewood’s Ashes spot must be in serious doubt after his poor start to the Australia A tour of England, with James Pattinson pressing his case strongly.

While Pattinson ran amok with 7-71 in Australia A’s match against Sussex which finished yesterday, Hazlewood went wicketless and has just three wickets at 64 on this tour across three one-dayers and this four-day match.

Hazlewood is also coming off a run of poor form in Tests, taking just 21 wickets at 37 in his past seven matches. It is now 18 months since Hazlewood has looked at his best, in any format, and he is currently trying to regain rhythm and fitness after a five-month layoff due to a stress fracture in his lower back.

While I expect Hazlewood to make Australia’s Ashes squad, he now has just two four-day matches left to prove he should be in the starting XI for the first Test at Edgbaston in three weeks. Australia A play the England Lions starting this Sunday, followed by the fixture between Australia and Australia A starting on June 23.

World Cup stars Mitchell Starc and Pat Cummins are automatic choices for the first Test, which leaves Hazlewood to battle the likes of Pattinson, Peter Siddle, Jackson Bird and possibly even Jhye Richardson for the third seamer spot.

Right now Pattinson may well be the frontrunner. While Hazlewood took the new ball in both innings against Sussex and went wicketless from 26 overs, Pattinson took four-for while opening in the first dig and then three-for from first change in the second innings.

Pattinson and Hazlewood have similar Test records, but the Victorian has a couple of clear advantages. The first is Pattinson’s jaw-dropping first-class record in UK conditions over the past two years – 51 wickets at 14.

Hazlewood, too, appeals as a fine option with the Dukes ball in England when in peak form. In the last Ashes in England in 2015 Hazlewood took 16 wickets at 26 despite not being at his best. That, of course, was very early in his international career – he had only five Tests of experience – and some of the judgments of Hazlewood’s performance in that series were very harsh considering his inexperience.

The second major advantage Pattinson has over Hazlewood is his vastly superior batting ability. Many Roarers get inflamed by the idea of factoring in a bowler’s ability with the bat. But the reality is that, when a line ball call needs to be made between two bowlers, it would be folly to ignore their respective talents with the blade.

Hazlewood is one of the worst batsmen in Test cricket. Over the past three years he has averaged just nine with the bat in Tests. In that same period, Pattinson has averaged 29 with the bat across his 21 first-class matches. He was always a gifted batsman but his frequent injury layoffs have given him a lot of free time to further hone his batting skills, to the point he could almost bat at seven in Tests.

Given the way the Australian top seven has laboured on recent Ashes tours of England, the Aussies selectors would surely be excited by the prospect of fielding an eight-nine-ten order of Pattinson, Cummins and Starc. That would be the strongest tail Australia have had in Tests in recent memory.

That is why Hazlewood needs to prove, very soon, that he is clearly a better bowling option than Pattinson. Because if he can’t do that then the selectors may well be swayed by both Pattinson’s terrific record in UK conditions and his much greater value with the bat. 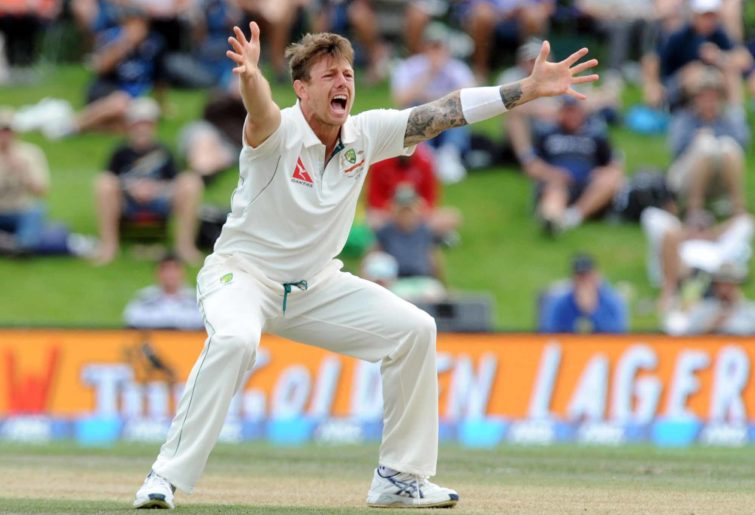 Right now the competition for that third Ashes pace spot is intense. Particularly if the first Test is played on a juicy pitch, I also wouldn’t rule out veteran seamer Peter Siddle, who I expect to be in Australia’s Ashes squad. The Victorian is in prime form for Essex in Division One of the County Championship, with 27 wickets at 22 to go with 200 runs at 33.

Siddle has comfortably more experience in English conditions than any other Aussie bowler, with 169 wickets at 25 in first-class cricket in the UK. If the selectors feel they have sufficient strike power from Starc and Cummins and want a third seamer who can bowl maiden after maiden, then Siddle is an obvious choice. He was deployed belatedly in the last Ashes and then proceeded to take 6-67 from 37 overs in his only outing, the fifth Test which Australia won by an innings.

Hazlewood’s position in Australia’s Ashes XI is not the only point of contention at the moment, with huge competition for the opening berth alongside David Warner. Incumbent openers Marcus Harris and Joe Burns both made resounding statements by scoring tons in their first matches of the Australia A tour against Sussex.

There are two things in Burns’ favour at this point. Firstly, he has far more experience in English conditions, having played 17 first-class matches in the UK compared to just one for Harris. Secondly, he has a superior overall Test record, with 1,123 runs at 40, including 180 in his last Test.

Burns would also give Australia a coveted left-right opening combination alongside Warner, a theme that would be continued down the order, with leftie Usman Khawaja at three and rightie Steve Smith at four.

Harris, meanwhile, is coming off one of the best Sheffield Shield seasons of the past decade, with 1,188 runs at 70. That included a match-winning knock of 141 for Victoria in the Shield final. Australian coach and selector Justin Langer has intimate knowledge of Harris’ ability, having mentored him at WA. He clearly rates Harris very highly.

Trying to pick which one of Harris or Burns will open alongside Warner in the first Test is extremely difficult at this stage. It will come down to the final two Australia A matches. Hazlewood needs to shine in those same fixtures or I think he’ll miss out on the first Test.