The girls of grassroots footy

Amidst the furore of Gillon McLachlan’s press conference regarding crowd behaviour, a little nugget – or rather a sizeable turd – slipped past the usually discerning public’s ears.

Gil, with his gender awareness diploma in hand claimed that people needed to feel safe at the footy so that they could “bring their wives”. Because, you know, women are simply a man’s plus one at the footy.

I had to wonder whether this bloke was even aware that a ‘W’ had been added to AFL back in 2017. Didn’t he see Taylor Harris’ epic photo or hear the crunch of Kiara Bowers laying 19 tackles in one game? It’s one thing to pretend he doesn’t know about an investigation into Jaidyn Stephenson, and another to deny the footy heritage of an entire gender.

So to set the record straight I thought I’d share some stories about females who haven’t needed husbands to escort them to the footy because they’ve been too damn busy playing it themselves.

Part One: The Young’uns

Over the course of the next three instalments, I’ll be bringing to you the personal tales of girls playing grassroots footy, from the next generation young’uns dreaming of AFLW careers, to the older newbies refusing to watch from the sidelines anymore, and finally, to the seasoned players who were there from the beginning.

The first occasion I had to speak to Bianca, I praised her for the little one-two-step she’d danced around her direct opponent in a game earlier that day. She explained that she was irritated by the player’s presence so she decided to “just get rid of her”. I loved that she made it sound and look so easy.

Bianca has always had sporting nous. As a child, she defied the doctor’s prediction that her hips would lead to mobility problems by mastering every sport she’s ever had a crack at – from swimming to cross-country running to football.

Unfortunately for round ball patrons, the x-factor was missing in football for Bianca so, with the encouragement of her sports teacher, she tried out footy and has never looked back. In fact, she switched from football to footy immediately. Who can blame her, right?

Needless to say, for such an all-rounder athlete, competing at state level isn’t out of the ordinary. As fast as her half forward legs could take her, she went from junior footy to West Perth Women’s Reserves to playing for Western Australia in the AFLW Under-18s championships, and finally to league level with Swan Districts.

During her first game in the AFLW Under-18s, she kicked a stunning 40-metre goal and earned herself one of the best on ground nominations. She followed it up a week later kicking the first goal of her first game with the Swan Districts league team. I’d need to jack hammer my driveway to experience the kind of impact Bianca has had this early into her footy career.

She’s got the skills, but she’s also got the passion too. When I was 17, the only thing I had extraordinary passion for was Peyton from Dawson’s Creek, but Bianca rhapsodises about footy: “I love the adrenaline rush from running onto the field with my team or when I take a mark or kick a goal. I love the challenge of footy and pushing myself to do better.”

“I never stop dreaming and setting goals for myself. I love the opportunities that women are now being offered. It’s an exciting time and I feel fortunate to be a part of it.”

For someone whose Pop has always told her that she wasn’t born to follow, it’s no surprise she’s out there carving it up each game on her way to the ultimate goal of playing for the West Coast Eagles AFLW team.

It was an inspirational story right up until she mentioned the Eagles, huh?

Now, since writing this piece, Bianca found space up against the boundary to deliver another cracking goal in WA’s match against Victoria in the second round of the AFLW Under-18s. 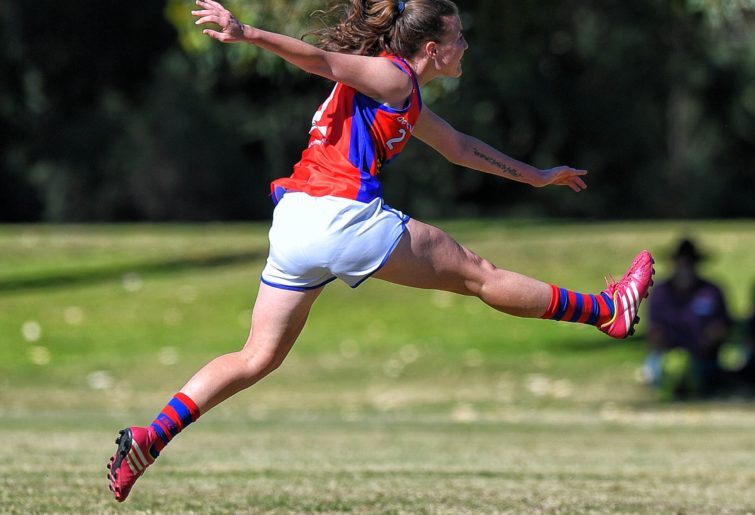 Emily Bennett
Emily comes from the Bennett footy dynasty. She plays footy with her two sisters, and her dad is the runner for their teams.

Emily says her dad is all for the AFLW, partly because he’s outnumbered in his household, but also because he has first-hand experience with how hard his girls go at the footy, and how tough they are.

Her mum gets a mention too: “Mum wishes she played footy when she was younger as her whole family was right into it. She’s the most supportive.”

It turns out I probably should have done my research a bit better before signing up with the West Perth Falcons because it seems everyone barracks for the West Coast Eagles. The Bennett family are no exception.

Emily has always been a huge Eagles fans and this early interest in the sport led to her playing school-based footy for a few years as well as with the Warwick Greenwood Knights in the 2017 WAWFL Youth Girls competition. Emily experienced the euphoria of her first premiership win with the Knights remembering fondly that it was “so much fun smashing pretty much everyone”.

She continued to hone her skills through her school, Mater Dei College, that innovated with an AFLW talent pathway, leading to a win in the 2018 Freo Dockers Cup Moore Division and another premiership cup. Paris Laurie coaches the senior girls at the college, and Emily notes that “it’s amazing being able to have a role model like her, which shows me that the AFLW is reachable”.

From there she worked her way into the West Perth Colts team in 2018, and was scouted for the state female talent academy, training with them in the off season. 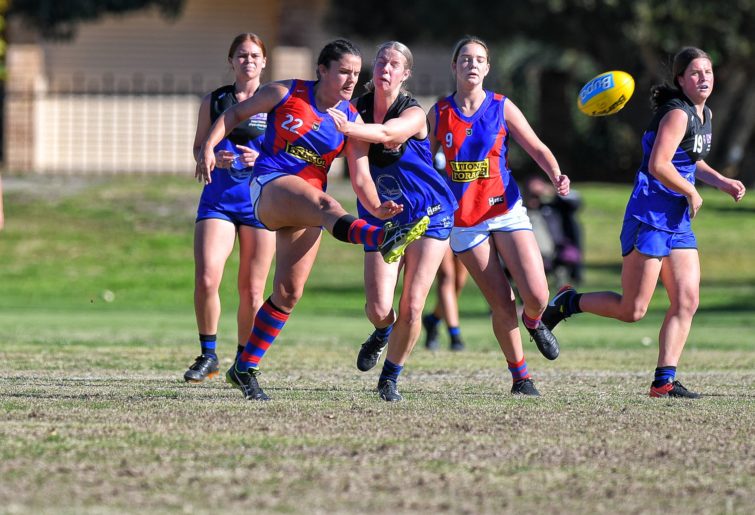 This year Emily has played in both the Falcons’ Women’s Rogers Cup and Reserves teams, and also trains with the Claremont league side. She’s currently on the Gold Coast with Bianca playing in the Under-18s championships.

Now, brace yourself for a slew of achievements because over those years Emily has earned best and fairest with her community club, runner-up best and fairest with West Perth Colts, and best on ground for the grand final of the Freo Dockers Cup. Oh, and she’s already played at Optus Stadium.

You’d be forgiven for thinking that while she was racking up those achievements she’d graduated from high school and completed her university degree, but the kid is still only 16. It took me 37 years to win my first sporting award, and even then, according to a particularly blunt teammate, “everyone gets the coach’s award eventually”.

Emily loves the contact of footy and, while she typically plays as a midfielder, she loves that there are so many positions that allow for different types of athletes. “Some sports you have to be tall or some short and fast but footy allows for all.”

She does admit with amusement that she mainly loves “being able to push and tackle and drive through people”. Having watched her play a few times this season, I can attest to how well Emily does all of those things.

Her plan from here is to focus on state selection for another two years and after that, the sky is the limit. As Emily says, “I grew up never realising that footy was an option for girls as I just thought netball is for girls and footy is for boys. I wasn’t taught that, but that’s what I believed.”

“Until high school where everything changed and I realised how much fun women were missing out on.”

And to that I say, keep the good times rolling, girls.