It’s starting to look like more than a blip for the Magpies.

It’s not just that Nathan Buckley’s side has lost back-to-back games – that’ll happen to even the best of sides – it’s the manner in which they’re being beaten.

The Pies only went down by four points to Hawthorn last Friday night, but it was an ugly performance. Despite dominating clearances 42-27, Collingwood managed only 35 inside-50s. The ball lived in the Hawks’ attacking half – 57 inside-50s – and if they’d been a bit more efficient could have taken control of the game much earlier.

It was a similar story a fortnight ago against North Melbourne. Clearances were pretty even – North with a 43-39 edge – but the inside-50 count was 64-36 in favour of the Roos, who were more ruthless than the Hawks and smacked the Pies by 44 points.

It’s looking more and more like the Bulldogs let one slip against Collingwood three weeks ago. Despite losing the clearance count 40-31, the Dogs managed 15 more inside-50s (59-44) and six more scoring shots, but their inaccuracy, coupled with Collingwood’s accuracy, meant they went down by nine points.

A dismal average of 37 inside-50s over the past three weeks says there’s clearly there’s a broken link in the Magpies’ chain.

They need to fix it quickly because it’s just about impossible to see them putting a winning score on the Eagles’ brilliant defence with fewer than 40 entries.

West Coast have had their own mini-slump this season. Back-to-back heavy losses to Port Adelaide and Geelong in Rounds 5-6 raised a few eyebrows, but they’ve won eight of nine since then and are coming off a 91-point derby thumping of the Dockers – I’m still not convinced Freo’s score of 2.19 is real.

The reigning premiers are rounding into form nicely for the home run, and a win here could see them end the round eight points clear of third spot and well on track to secure a home run through the finals – up until the big one, of course.

Collingwood have made three changes. Matt Scharenberg, Josh Thomas and Josh Daicos have all been dropped. Into the side come Levi Greenwood, Ben Crocker and debutant John Noble.

There is the potential for some exciting match-ups tonight. Elliot Yeo versus Scott Pendlebury, Luke Shuey versus Adam Treloar, Steele Sidebottom versus Andrew Gaff, Darcy Moore versus Josh Kennedy, Shannon Hurn versus Jordan de Goey, but who’s to say if any of those will happen, or, if they do, they’ll be for any significant amount time. 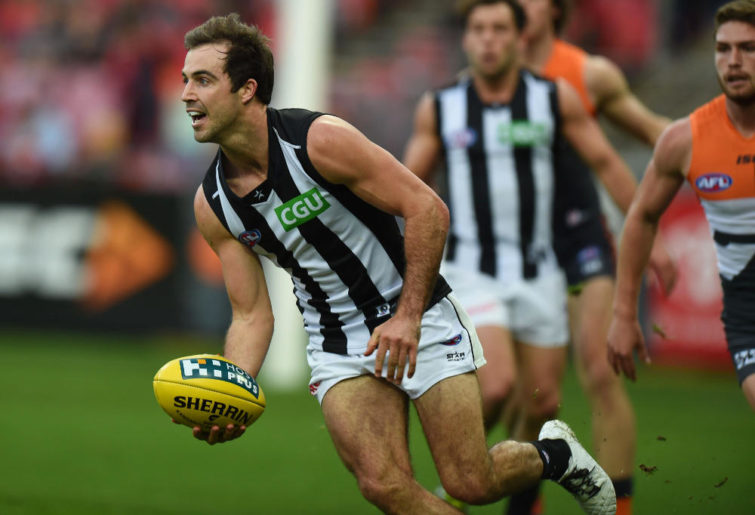 Thankfully, the most mouth-watering one, and the one we can guarantee seeing, is the battle between Nic Naitanui and Brodie Grundy.

In an age of footy where defenders zone off and most midfielders pay little regard to the idea of direct opponents, ruck is the last position where we can be assured of something resembling a one-on-one battle – and they don’t get much better than this one.

Nic Nat is not fully back into the swing of things just yet after returning from a knee reconstruction – he’s played less than 60 per cent of game time in each of his two games back – but he’s looked every bit the dominant force we know he can be during his time on the ground.

At 25, Grundy is now at the peak of his powers as the most complete ruckman since Naitanui’s former teammate Dean Cox.

His groundball ability sets him apart from most of his opponents, but Nic Nat is not one of them. If he can break even against the Eagles’ No.1 ruck and then take advantage of Tom Hickey when it’s his turn to do the heavy lifting, the Magpies will be rapt.

On the other hand, if Hickey can play Grundy to a draw during his time on the ball and Naitanui can get the upper hand, it spells trouble for Collingwood.

West Coast have had Collingwood’s measure of late. We all know about the two great finals last year, but those matches are sandwiched by a pair of Eagle wins at the MCG.

I expect Adam Simpson’s men will extend their winning streak against Collingwood to five games tonight with a pretty comfortable four-goal win.