Which Maroons players earned a shot at 2020 Origin redemption?

The 2020 State of Origin series might be ten months away, and there are plenty of variables when it comes to how Queensland may line-up for Game 1, but at the conclusion of their second straight Origin series defeat, selections based on loyalty should no longer be a factor.

Let’s look at a brief overview of each players series performance and whether they should be considered for Game 1 next year.

Daly Cherry-Evans (Captain)
He gave 110 per cent all series and fans should be proud of his effort. But there were a number of areas which showed that Cherry-Evans isn’t on the same level as his halves predecessors, Johnathan Thurston and Cooper Cronk.

He lacked creativity with only one try assist for the series. His kicking game was solid for the most part, but there were too many ineffective kicks and fifth tackle options. Can’t fault his leadership though, he’s an excellent captain.

Being appointed captain virtually guarantees his selection for Game 1 next year, but it remains to be seen if he is genuinely the best halfback option for Queensland.

Ben Hunt
Probably Queensland’s best available option for hooker and did an admirable job. He made more tackles than anyone else in the series with 137. Missed 17 but you could excuse that figure for a little bloke defending in the middle-third in Origin.

A try assist, only one error, solid kicking game out of dummy-half including a 40/20, the only criticism would be that he didn’t run enough, therefore wasn’t as influential as Queensland would have liked.

Hunt will face challenges for his spot from Jake Friend and rising star Reed Mahoney, it may come down to who’s in the best form prior to Game 1 next year. 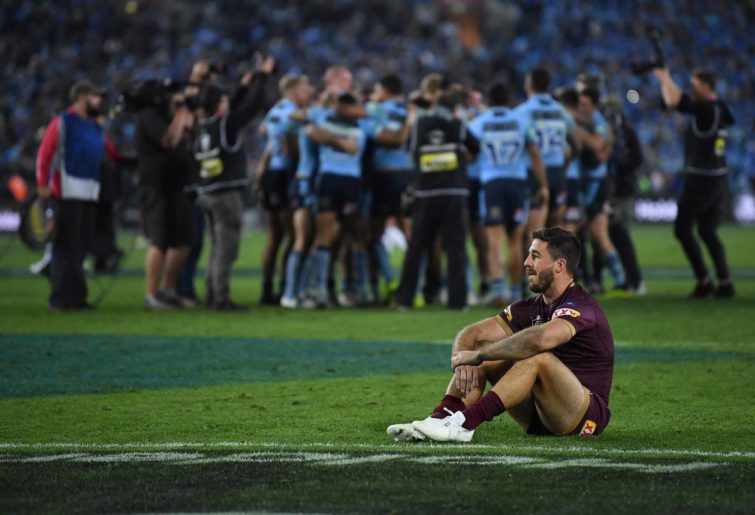 Cameron Munster
A genuine footballer who threatened every time he touched the ball in games one and three. His Game 2 performance however, like many of his teammates, was a game he’d rather forget.

A few defensive lapses throughout the series but 17 tackle busts, two line-breaks and an excellent kicking game, he was easily one of Queensland’s best. A certain selection for Game 1 next year.

Christian Welch
Made his Origin debut off the bench in Game 3, making 64 metres, an offload and 17 tackles.

He deserves more opportunities at Origin level and should be picked on the bench for Game 1 next year.

Corey Oates
Another strong series for Queensland’s left winger. Only one try but wasn’t given much space and opportunities from his playmakers.

Averaged 153 metres across the series including some powerful kick returns and always safe at the back. Did his state proud though and is a certain selection for Game 1 next year.

Corey Norman
Making his debut in Game 3, it was a game of two-halves for Norman. The first half saw him heavily involved, a try-assist with a neat grubber for Felise Kaufusi to score the opening try, a solid kicking and some nice runs.

His second half was not as impressive, kicking the ball out on the full and a few costly missed tackles. Will likely need to be in excellent form leading into Game 1 next year in order for him to retain his spot in the team.

Dane Gagai
man of the match in Game 1 with two tries to continue his unbelievable form at Origin level.

However, he didn’t have the same influence in games two and three, not to say he played poorly though. Averaged 142 run metres including strong kick returns and backing up the forwards with strong ball carries. A certain selection for Game 1 next year.

David Fifita
The 19-year-old firebrand impressed on debut in Game 1, running for 82 metres, two tackle breaks, three offloads and 12 tackles coming off the bench. Failed to have the same impact in games two and three though, running for just 46 metres and 20 metres, and missed tackles in the decider which proved costly.

Queensland should persist with him off the bench, as he’ll only get better with experience.

Dylan Napa
Napa wasn’t in great for before he was selected in Game 1, and although he made 90 metres from his 29-minute stint, he missed seven tackles. A poor performance in Game 2 where he only ran for 27 metres and missed two tackles, saw him dropped for the decider.

An enforcer at club level but doesn’t bring the same intensity to Origin. He’ll need to be in irresistible form to be considered for Game 1 next year, otherwise Queensland should look to other options.

Ethan Lowe
From being unwanted at the Cowboys and languishing in reserve grade, to an Origin player. Lowe was a late inclusion after Matt Gillette went down injured and was unbelievable in his debut in the decider.

He had 90 run metres, 52 tackles, a charge down which resulted in a try a few plays after and was handed goal kicking responsibilities, meaning he needed to slot a clutch conversion to level scores in the final minutes and he nailed it.

If he’s in reasonable form leading into Game 1 next year, he should retain his spot in the team.

Felise Kaufusi
Another reliable series from Queensland’s ever reliable edge back rower. Averaged 100 metres, ran good lines and made 72 tackles. Scored the opening try of the decider.

He was occasionally ill-disciplined though, giving away crucial penalties and a couple of costly errors, but overall his effort can’t be understated. A certain selection for Game 1 next year.

Jai Arrow
Missed games two and three due to injury. Made 104 metres including four tackle busts in his Game 1 appearance. A workhorse who is a certain selection for Game 1 next year and has a long Origin career ahead of him.

Jarrod Wallace
In the month leading up to Game 2, Wallace was averaging over 200 run metres for the Titans so his selection was definitely warranted. Unfortunately, he again was unable to bring his club form to Origin and an ill-disciplined performance has added to his underwhelming Origin resume, which should see him overlooked for Game 1 next year, regardless of his club form.

Joe Ofahengaue
Played games one and three, missed Game 2 due to injury. Ofahengaue was solid, running for 99 metres and 90 metres in his two games. Needs to tighten up with his defence and play with more intensity. He should be selected for Game 1 next year, with a view that he’ll be a long-term Origin player.

Josh McGuire
Although his run metres were well down compared to what he’s produced for the Cowboys this season, he was a brick wall in defence all series against a highly energised and enthusiastic New South Wales forward pack, making 127 tackles and amazingly only missed one tackle in Game 2 when the Blues were running riot.

A certain selection for Game 1 next year. 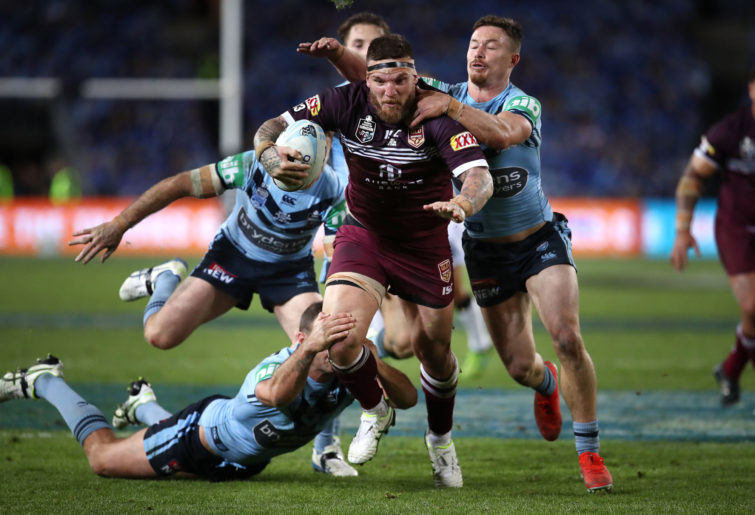 Josh McGuire of the Maroons (Photo by Ryan Pierse/Getty Images)

Josh Papalii
Averaged 100 run metres for the series including a total of seven tackle busts and a try. But he, like many of his teammates, had a regrettable Game 2, registering only 69 run metres for a staring prop.

Now an experienced campaigner at Origin level, he was required to become a forward leader in a team with many new faces and did a good job. A certain selection for Game 1 next year.

Kalyn Ponga
Admitted that it took time to get use to the speed and intensity of Origin in the first half of Game 1, the young superstar was arguably the difference in the second half, laying on two try assists and was a threat right across the park.

He had little effect in Game 2, but he was playing behind a badly beaten forward pack and misfiring halves. Certain selection for Game 1 next year and still viewed as Queensland’s fullback for the next 10 years.

Matt Gillette
Ruled out of Game 3 with a groin injury. Hasn’t been the same since returning from his fractured neck and was well below his best leading into the series. Selected purely on loyalty which is understandable.

He made 86 tackles but missed 10 and lacked potency in attack. Averaging only 45 run metres, one tackle break and zero off-loads, he might be under pressure to keep his spot for Game 1 next year, after the stellar performance from his replacement, Ethan Lowe.

Michael Morgan
Played out of position at left centre for the first two games, then used from the bench in Game 3. Morgan was mismanaged and wasted this series. His 18 try assists for the Cowboys wasn’t enough to secure the five-eighth jersey for the decider which raised a few eyebrows considering Queensland had struggled to create try scoring opportunities.

Probably a certain selection for Game 1 next year but needs to be better utilised.

Moses Mbye
Selected purely because of his utility value but was out of form for the Tigers prior to the series opener.

Played only 20 minutes total over the first two games with no effect, before being promoted to the starting side at left centre, where he had little influence. Queensland should be looking to someone with a little more ‘X-factor’ as utility. Anthony Milford or AJ Brimson come to mind.

Tim Glasby
Reliable, but lacked aggression and punch off the bench, therefore had little influence. Someone like Korbin Sims, a player with a bit of mongrel might be better suited.

Will Chambers
It might be fair to say the 31-year-old is now past his prime. He was dominated by Latrell Mitchell in the 2018 series, and although he got one back on his rival with a solid performance in Game 1, he again struggled in games two and three.

Most missed tackles and most errors for the series. Once a certain selection, it might be time for Queensland to look at the likes of Kyle Feldt for 2020.