Australia’s World Cup campaign saw several veterans flourish, an inexperienced player have his breakout momen and a host of other players disappoint. These are my player ratings.

Mitchell Starc (9/10) – 27 wickets at 18
The express left armer dominated his second successive World Cup, breaking Glenn McGrath’s record for the most wickets in a World Cup. It was a particularly remarkable effort given how little ODI cricket he had played in the previous two years. He is in wonderful rhythm and looks primed for a big Ashes series.

David Warner (9/10) – 647 runs at 72
Australia’s best ODI batsman of the past decade, Warner was surprisingly doubted by a huge number of cricket fans who did not believe he could return from his year-long ban and make an immediate impact in this tournament. The veteran left hander came back as a more cautious opening batsman and formed the bedrock of the Australian batting line-up.

The signs are very good for the Ashes.

Alex Carey (8/10) – 375 runs at 62
One of the breakout stars of this World Cup, Carey was skilful, calm and, perhaps most impressively of all, extremely versatile. Whether being asked to put out fires or add fuel to the blaze the wicketkeeper-batsman excelled.

Carey consistently made tough runs and looked elegant in the process. His glovework was ordinary, though, and needs work, which is why he was marked down.

Aaron Finch (7.5/10) – 507 runs at 51
The Australian skipper displayed sharp tactics throughout the World Cup and bossed the first two-thirds of the campaign before fading late. His aggression against spin was particularly important for Australia as they finished second on the table after the group stage.

Steve Smith (7/10) – 379 runs at 38
Smith had a bit of an odd tournament, asked to bat out of position at four and coming in quite late in the innings at times. He’s always been at his best stationed at three with plenty of time to build an innings.

That was just what he did in the semi-final against England, steering Australia out of disaster territory. He was not at his most fluent in this tournament but showed good signs against England that he was finding his rhythm.

Jason Behnrendorff (7/10) – nine wickets at 25
Just months after making his ODI debut, Behrendorff became a key member of the Australian attack. His ability to earn late swing, particularly back in to right-handers, made him a man to be respected by opposition top orders. Behrendorff ran amok against England in the group stage and was also excellent against New Zealand.

This performance could potentially vault him into Test contention over the next six months, especially if Australia’s main quicks are beset by injuries, which is a common occurrence.

Pat Cummins (6/10) – 14 wickets at 30
Cummins’ economy rate of 4.96 runs per over was elite and helped to build pressure for other Australians to capitalise on. But after a barnstorming start to the tournament his penetration waned, as he took just three wickets in Australia’s last five matches.

Usman Khawaja (6/10) – 316 runs at 35
Australia badly missed Khawaja’s composure and talent against pace in the semi-final. Although he wasted a lot of starts in this tournament, the left hander’s 88 against New Zealand saved the Aussies. He deserves to start in the Ashes but will have to prove he has recovered from his hamstring injury.

Kane Richardson (6/10) – five wickets at 22
While the South Australian’s stats look good, I think they flattered him a touch. More than six years since making his ODI debut Richardson has never looked at home at international level. Australia should have played Josh Hazlewood ahead of him.

Nathan Lyon (5/10) – three wickets at 60
If Richardson was flattered by his stats, Lyon was done no favours by his numbers. In the semi-final he was offered an extremely difficult task, brought into the attack with England’s gun opening pair on the rampage and few runs to defend.

Up until then he had done a very good job of building pressure in the middle overs, conceding a miserly 4.1 runs per over in his first three games. Lyon was never going to be a major wicket-taking threat but performed his holding role well.

Nathan Coulter-Nile (4/10) – 4 wickets at 70, plus 98 runs at 32
Coulter-Nile’s bowling was a 3/10 at best but he gets an extra point for that remarkable, match-winning 92 against the West Indies. About to turn 32 years old and with the next World Cup now four years away, his international career may now begin to wind down. 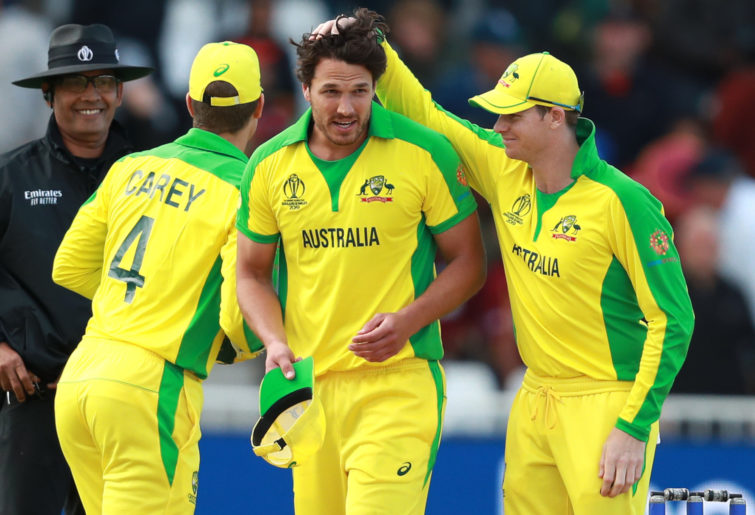 Glenn Maxwell (4/10) – 177 runs at 22
Maxwell entered this World Cup in arguably career-best form and was very good in the first half of the tournament, scoring at a strike rate of above 200 despite fairly limited opportunities. But when it really mattered, at the business end of the World Cup, Maxwell went missing.

Marcus Stoinis (4/10) – 87 runs at 14, plus seven wickets at 35
Stoinis did a decent job with the ball but, pencilled in to bat at number five in most games, making runs was his main role and he failed miserably. That came as no surprise to everyone bar the Australian selectors given Stoinis had been in a deep form trough with the blade for more than a year.

It beggars belief he was retained in the Australian line-up even after suffering two side strains.

Adam Zampa (3/10) – five wickets at 47
Zampa came into this World Cup in fine nick after playing well in India and the UAE but then bowled like a man bereft of confidence. When he trusts himself and uses his variations Zampa is a good ODI bowler.

But all too often in his international career he has seemed to be held back by self-doubt.

Shaun Marsh (2/10) – 26 runs at 13
Marsh has been a wonderful servant in the ODI format but I think that, after suffering a broken arm, his international career may be over.

Peter Handscomb (1/10) – four runs at 4
Handscomb deserved to play the semi-final against England after performing very well in ODIs this year. Predictably lazy criticism has been directed at him since his failure in that match.

Those who follow cricket year round, not just when it is in the glaring spotlight, know he earned that opportunity.