Cycling is just so much better with Lance Armstrong involved

It’s the best three weeks of the year!

Throughout the month of July, my day consists of staying up late to watch le Tour de France, then waking up – bleary-eyed and in dire need of caffeine – to listen to expert analysis of the previous evening’s antics.

And the only place to get a breakdown of the Tour is from the man who knows more about what it takes to win the race than anyone else, because he rode into Paris wearing the Maillot Jaune seven times.

The Move is compulsory listening for any cycling fan. In a nutshell, it’s the best sporting podcast in the world (sorry, second-best – Game of Codes is obviously No.1).

As for what makes The Move necessary listening? That’d be its co-host – a retired cyclist by the name of Lance Armstrong.

Drugs, disgrace, dickhead – look, there are a lot of ‘d’ words that come up when discussing the Texan. But it’s all sort of worked out for the best for supporters of the sport.

As a result of his spectacular fall from grace, Lance has very few relationships to maintain in the world of pro cycling.

He’s still got an enviable list of contacts, but when it comes to the top brass – the heads of the UCI and the Amaury Sport Organisation, who are in charge of the Tour – Lance is persona non grata, and therefore more than happy to call a spade a spade.

A day spent racing 240 kilometres on the flat for an inevitable bunch sprint at the end? We all know it’ll be boring until the final few hundred metres, but Lance actually says as much (in fact, he’ll make a snoring noise).

When a directeur sportif has an opinion as to how a stage played out, Lance has no hesitation in arguing the point and even playing the man if he thinks someone is out of line.

Keeping things on a more even keel is his co-host George Hincapie, who is one of cycling’s undisputed good guys and will always be a legend for fans from Australia after he was Cadel Evans’ road captain in the year our boy won the Grande Boucle.

But while the whole thing is just a great listen, George’s part in the podcast also leads me to wonder how Lance ended up in a position whereby he is not allowed to have any part in the sport – any sport, actually – at all.

See, George got popped for doping too. He was part of Lance’s team throughout the seven now-stripped titles. And to be on a winning team in those days, you had to dope.

I’m not saying it like ‘gun to your head’ had to dope, just that if you were on a team that was winning in the early 2000s, you more than likely had a little something-something to help the blood flow.

And George is open about the fact he was on the juice. In fact, he’s one of the main reasons Lance ended up getting caught – he was hauled in front of a grand jury and gave testimony about what was really going on at US Postal.

So what did he get for it? Some results stripped and a back-dated ban. He is free and clear to be part of the sport, as evidenced by the fact he owns his own team – Arapahoe Resources–BMC.

Lance? Dude isn’t even allowed to run the Boston Marathon, such is the severity of his lifetime ban from sport, never mind coaching or managing a cycling team. 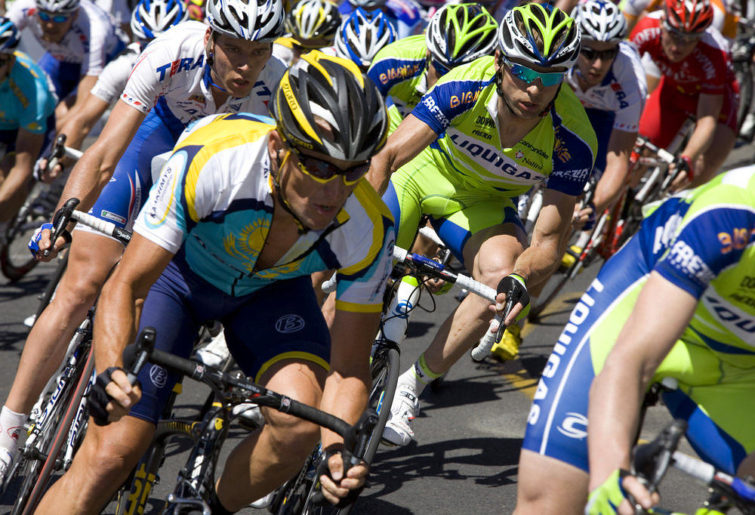 I’m not having a go at George – he did his porridge and is allowed to move on with his life.

So would it be so wild if we, maybe, let Lance do the same?

The bloke cheated, no question about it, and he was a bully to those who called him on it. But he’s had every one of his significant titles stripped – bar his World Championship jersey in the early ’90s – paid a $5 million fine to the US government, and has sat on the sidelines since 2012.

Isn’t that enough? Do we need to see the guy bleed for the rest of his life for doing what everyone else was doing?

Ultimately, aside from the fact George is considered one of the nicest guys in cycling – his Wikipedia page actually reads “he was considered to be the kindest and most cordial member of the peloton” – is there such a difference between the two?

Well, yeah, Lance won. But otherwise, they both made the same choice – to dope – and the idea that Lance made his teammates get on the juice has been proven patently false.

The sport is better for having George Hincapie be part of it.

And The Move is evidence that cycling would be far better if Lance Armstrong was more involved too.