How Novak Djokovic will stop the stars aligning for Roger Federer

Roger Federer said the stars are aligned after he beat great rival Rafael Nadal to reach the Wimbledon final.

However, the 37-year-old, chasing his ninth Wimbledon title and his 21st slam win, will have to put in another masterful performance on Sunday against Novak Djokovic.

Although Nadal has a better head-to-head record against Federer than Djokovic does with Federer, the world No. 1 will be an entirely different and more difficult hurdle to overcome.

Here’s why the Serb will once again prevail against the Swiss in the Wimbledon final.

In his post-match press conference Nadal said Federer’s return was “better than my one” and that he “didn’t receive well” on the day.

The 33-year-old also added that his backhand did not work as well as in the previous rounds and, as a result, he did not have that freedom to move to the forehand.

Despite those perceived shortcomings, Nadal was mightily close to forcing a deciding set after earning a breakpoint when Federer served for the match.

So if someone had a stronger backhand and a better return, the result could have been very different.

Enter Djokovic, a man with the game’s best return and one of its best backhands.

The key to those victories was the return of serve.

In this year’s semi-final Federer was able to crunch forehand after forehand off the back of Nadal’s not particularly effective returning, allowing him to take command of the rally.

Djokovic is able to counter this as, with surgical accuracy, he can fire returns to the feet of Federer, forcing the Swiss into making a half-volley or being on the back foot.

Ridding him of this front-foot, attacking ball is vital.

In the 2014 Wimbledon final Djokovic won 33 per cent of return points compared to Federer’s 30 per cent.

More importantly, however, is that when Federer did not make a first serve, Djokovic won 52 per cent of the Swiss player’s second serves. Federer was down at 32 per cent.

It was a similar story in the 2015 Wimbledon final too. Djokovic won 48 per cent of second-serve return points, nine more than Federer in this regard. 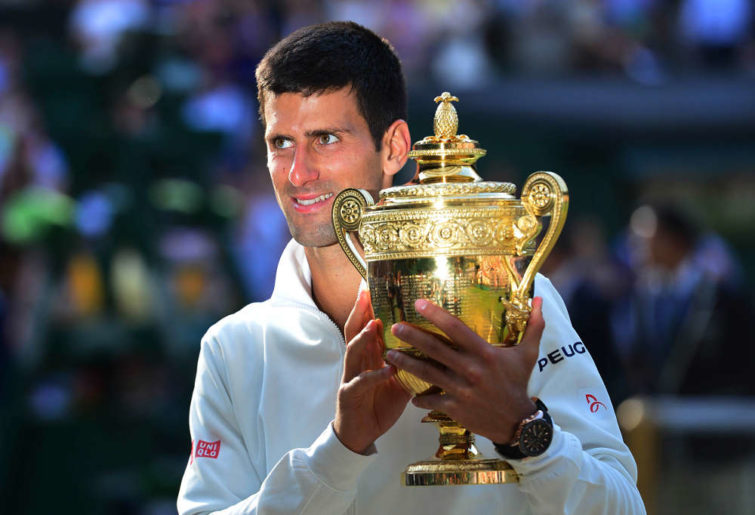 Naturally, Federer knows this too.

When asked what he thought Djokovic did exceptionally well, Federer said it was the jump backhand to the left – how he can defend so well on that wing and that he does that better than anybody in tennis.

Nadal has improved his backhand over the years, but Djokovic does that better too. Whether going deep crosscourt or switching it up the line, the top seed can wear down the Federer backhand in a way Nadal could not on Friday.

The above statistics may yet account for nothing in this year’s final, but it is a good indication of what Federer has to do to be victorious.

He needs to serve impeccably, come to the net, return well, drive through the backhand, not get dragged into too many long rallies and hope Djokovic is not at his brilliant best.

Their recent matches would tend to suggest that Djokovic will come out on top again in the final.

Where Federer has won six of the last seven encounters against Nadal, he has won just two from his last ten matches with Djokovic. The last time he beat the Serb was back in 2015.

It is no secret that Federer tends to have had more success on the non-slow surfaces and, according to him and many others, the court speed at Wimbledon is the slowest it has been in years.

Last year big servers such as Kevin Anderson, John Isner and Milos Raonic all made it to the quarter-finals or better.

This year none of them made it to the quarter-finals – they were replaced with the likes Bautista Agut, Guido Pella and David Goffin, all of whom you could argue prefer slower surfaces.

Faster courts tend to mean big servers thrive, and they really have not done that in 2019.

A slower court surface is likely to favour Djokovic as well.

It will give Federer, a better server than Djokovic, fewer free points on serve, and the Serb’s metronomic baseline consistency is often too much to handle for Federer, especially on a slower court where it is easier to retrieve shots.

Finally, Federer admitted he was “exhausted” after his three-hour-long match against Nadal.

That will be music to Djokovic’s ears. It is worth pointing out that Federer is going to be 38 next month, so beating Nadal and Djokovic back to back may be one step too far.

But if anyone can do it, Federer can.

Djokovic has not really been tested this tournament and was erratic at times in his semi-final against Agut. Federer is a huge step up in quality, and if Djokovic does not improve, he could certainly be beaten.

Nevertheless, sometimes Djokovic is just too good for everyone. So whatever Federer does, it still may not be enough, such is Djokovic’s brilliance.

The stars have aligned so far for the Swiss maestro, but it may not be enough against the 15-time grand slam champion on Sunday.