The 16-team format used for the 2007 World Cup proved to be short-lived, as the tournament reverted to a two-group structure of 14 teams (as was the case in 2003, but with quarter-finals instead of the Super Six) for the next two editions.

In this final part of our series on Associates at the World Cup, we look back at how they fared in the 2011 edition in the sub-continent and the 2015 edition in the Antipodes.

2011 – Ireland, Canada, Netherlands and Kenya
Hitherto known as the ICC Trophy, the qualifying tournament was now christened as the Cricket World Cup Qualifier, and was played in South Africa in 2009 with four World Cup berths on offer. Ireland, emerging as the strongest team on the Associate circuit, won the 12-team event by defeating Canada by nine wickets in the final, while the Netherlands won the third place-playoff against Kenya by six wickets.

Kenya had a nightmarish start in Group A, as they were bowled out for 69 in a ten-wicket rout by New Zealand. The 2003 semifinalists went on to lose heavily to Pakistan (by 205 runs), Sri Lanka (nine wickets) and Zimbabwe (161 runs), besides also falling to Canada and Australia by five wickets and 60 runs respectively. Collins Obuya, now playing primarily as a batsman, scored a defiant 98* against Australia.

Canada also began poorly, what with a defeat by 210 runs at the hands of Sri Lanka followed by one by 175 runs against Zimbabwe, but showed improvement in their later matches. They put themselves in a great position against Pakistan – they bowled the 1992 champions out for 184 and then reached 104/3 in the 33rd over in reply. However, a collapse of seven wickets in nine overs led them to a 46-run loss.

Canada faced Kenya at Delhi in their fourth game, and beat them for the first time in three attempts at the World Cup. Pacer Henry Osinde took 4/26 to help restrict Kenya to 198, before the batsmen completed a five-wicket win. Canada conceded 358/6 against New Zealand, but scored a respectable 261/9 in reply, with captain Ashish Bagai scoring 84. They signed off with a seven-wicket defeat to Australia.

In Group B, the Netherlands gave England (who eventually won by six wickets with eight balls left) a run for their money in their opening fixture at Nagpur by piling up a formidable 292/6, thanks to a brilliant 119 from Ryan ten Doeschate.

Following this encouraging start, the Dutch suffered massive defeats to the West Indies (by 215 runs) and South Africa (by 231 runs), before losing to India by five wickets.

The Netherlands lost each of their last two games, against Bangladesh and Ireland respectively, by six wickets. The match with Ireland, at Kolkata, saw ten Doeschate hit another century, this time a knock of 106 that, along with captain Peter Borren’s 84, carried the Netherlands to 306. However, Paul Stirling stole the show by smashing 101 from 72 balls, paving the way for an Irish win with 14 balls to spare.

Ireland, led by William Porterfield, began their campaign by facing Bangladesh at Mirpur. Chasing a modest 206 after an impressive display from their bowlers, they frustratingly lost their last five wickets for 27 to lose by 27 runs. Having missed a golden chance to start on a winning note, Ireland hoped for redemption in their next match, against neighbours England at Bangalore’s Chinnaswamy Stadium. 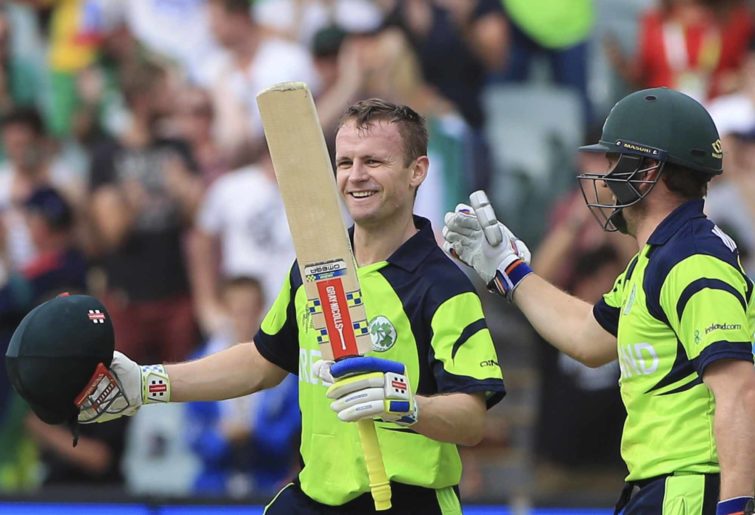 Ireland were 106/4 in the 23rd over in pursuit of a steep target of 328 when Kevin O’Brien strode out. The score duly became 111/5, before O’Brien decided to unleash mayhem on the hapless English bowlers. The all-rounder pounded 13 fours and six sixes en route to a stunning 50-ball century, bettering Australian Matthew Hayden’s 66-ball effort against South Africa in the 2007 edition as the fastest World Cup ton.

O’Brien shared in a stand of 162 with Alex Cusack (47) to turn the game on its head – a new record for the highest sixth-wicket partnership at the World Cup. Though he was seventh out at 317 for a mind-boggling 63-ball 113, he had done enough to seal a three-wicket win for Ireland. It was John Mooney who hit the winning four off the first ball of the final over, thus completing the highest successful World Cup chase.

Success eluded Ireland in their next three games, which dashed their quarter-final hopes. Against India, they lost by five wickets after scoring 207. Against the West Indies, they lost by 44 runs, having been set 276 to win. Against South Africa, they could manage only 141 in a chase of 273. Their final game produced a win, as they notched another successful 300+ chase, this time against the Dutch as aforesaid.

2015 – Ireland, Afghanistan, Scotland and United Arab Emirates
The 2015 World Cup was originally planned as a ten-team affair, but following Ireland’s spunk in the 2011 edition, the ICC rightfully retracted their regressive decision and retained the 2011 format.

Under a new qualifying structure, the Irish cemented their position as the leading Associate in the lead-up to the tournament, securing qualification by winning the 2011-13 World Cricket League Championship.

The second-place finisher of the WCL Championship also earned direct qualification, and it was Afghanistan who clinched that spot to confirm a maiden appearance. It further added to one of the most meteoric rises by a team in any sport.

The two remaining spots were decided by the ten-team World Cup Qualifier in New Zealand in 2013-14, where Scotland defeated the UAE by 41 runs in the final.

Ireland showed that they had outgrown the Associate tag, as they won three out of six games in Group B. They kicked off with intent, surpassing a target of over 300 for the third time at the World Cup to win by four wickets against the West Indies at Nelson. The West Indies recovered from 87/5 to post 304/7, but Paul Stirling (92), Ed Joyce (84) and Niall O’Brien (79*) ensured a clinical chase with 25 balls remaining.

In their second match, Ireland were 97/4 in response to the UAE’s 278/9, before Gary Wilson (80) steered them to a nervy two-wicket win. Earlier in the day, Shaiman Anwar scored 106, rescuing the UAE from 131/6 by adding 107 with Amjad Javed, which created a World Cup record for the seventh-wicket stand. Against South Africa, Ireland ceded a mammoth 411/4 and were steamrolled by 201 runs.

Ireland bounced back with a thrilling five-run win against Zimbabwe at Hobart, where a third-wicket stand of 138 between Joyce (112) and Andrew Balbirnie (97) propelled Ireland to 331/8.

Zimbabwe fell to 74/4 in reply, but staged a turnaround to reduce the equation to seven off the last over with two wickets in hand. To Ireland’s relief, Alex Cusack (4/32) kept his calm and took the last two wickets.

Ireland lost their last two games to India and Pakistan by eight wickets and seven wickets respectively, but it was only on the basis of net run rate that they missed out on the quarter-finals. Captain Porterfield scored 107 against Pakistan in what was a must-win match for Ireland, but a total of 237 proved to be inadequate.

Nevertheless, Ireland could now boast of five full-member scalps at the World Cup.

The UAE’s fighting spirit was not just limited to their game against Ireland. In their opening encounter at Nelson, they ran Zimbabwe close by racking up 285/7 (Anwar scoring 67) on the board before losing by four wickets.

However, they mustered only 102 in a nine-wicket defeat to India, and lost their last three games to Pakistan (by 129 runs), South Africa (by 146 runs) and the West Indies (by six wickets). 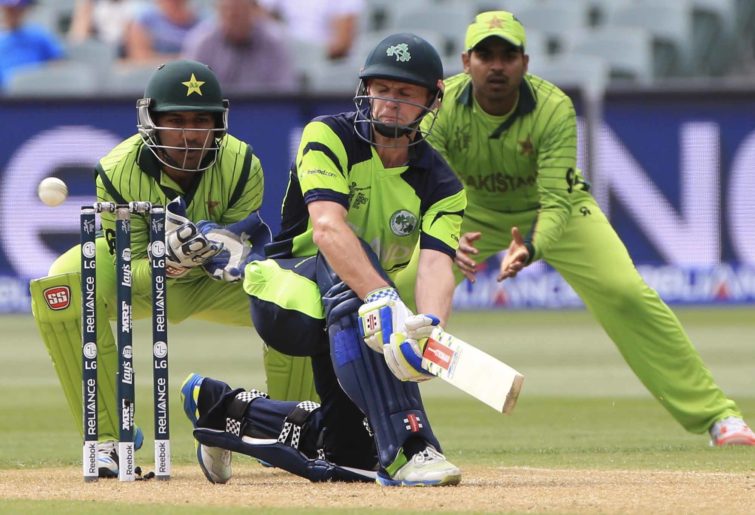 There was no dearth of Associate spirit in Group A as well. Smarting from a defeat to Bangladesh in their first game, Afghanistan had Sri Lanka reeling at 51/4 in their chase of 233 at Dunedin, before going down by four wickets.

Their third fixture was against Scotland, also at Dunedin, and it presented both teams with a great chance to notch their first win at the World Cup. The game turned out to be a real classic.

Pacemen Shapoor Zadran (4/38) and Dawlat Zadran (3/29) helped bowl Scotland out for 210, before opener Javed Ahmadi struck a quick 51. However, Ahmadi’s dismissal led to a manic collapse from 85/2 to 97/7. Hamid Hassan joined Samiullah Shenwari at 132/8 in the 35th over, and the duo built a stand of 60. When Shenwari was ninth out for a priceless 96, Afghanistan still required 19 from as many balls.

It was left to the last pair of Hassan and Shapoor to script a famous one-wicket win for Afghanistan with three balls to spare. In their fourth game against Australia at Perth, Afghanistan were at the receiving end of two World Cup records – they conceded the highest total (417/6) and lost by the biggest run margin (275). This was followed by defeats to New Zealand (by six wickets) and England (by nine wickets).

Despite being skittled for 142 in their first game against New Zealand, Scotland impressed by taking seven wickets in the chase. Against ‘auld enemy’ England, they lost by 119 runs. Kyle Coetzer scored a stellar 156 in a total of 318/8 against Bangladesh at Nelson, albeit in vain, as the Tigers won by six wickets.

The Scots bowed out with defeats to Sri Lanka (by 148 runs) and Australia (by seven wickets).