Whether he wants to or not, Vettel is passing on the baton

On day dominated by the marathon Wimbledon men’s final and the nailbiting conclusion to the cricket World Cup, the British Grand Prix, not to be outdone, delivered one of the best Formula One grands prix in years.

It had all the ingredients of an instant classic, replete with fierce racing, fascinating tactics and a genuine battle for the lead, and will live long and happily in the minds of those fortunate enough to see it.

Except for Sebastian Vettel, that is.

Vettel’s expectations upon arriving at the historic Silverstone Circuit were lowered in line with those espoused by Ferrari. Silverstone’s fast bends, demanding of a car’s complete aerodynamic package, would favour Mercedes and its always-improving W10 package more than its own SF90, mired as it has been in development hell, or so said the Italian team.

Practice did little to raise hopes. Ferrari struggled on the freshly laid tarmac from the off, experiencing wear so severe that it struggled to keep the tyres alive long enough to complete a single qualifying simulation run, and the team’s long-run pace was similarly uninspiring.

So it would be a bad weekend for Ferrari just 12 months on from Vettel’s memorable victory at the same circuit, after which the team hung the Union Jack in Maranello to commemorate the hard-fought win.

The prediction came true — but only for Vettel.

Teammate Charles Leclerc comfortably had the German’s measure throughout the weekend, as the 21-year-old has increasingly tended to do. While Vettel languished almost a full 0.7 seconds off Valtteri Bottas’s pole time on Sunday, Leclerc pushed the Finn to within just 0.073 seconds and was outdone only by Lewis Hamilton, whose own qualifying lap fell short by a measly 0.006 seconds.

Even Red Bull Racing was getting amongst it, with Max Verstappen’s 0.183-second put down to an issue managing turbo lag, with Pierre Gasly a little off the pace.

Only then came Vettel, the slowest of the frontrunners and with no explanation for his lack of pace.

Qualifying had set the rhythm for a thrill-a-minute race. The negligible gap between the leading Mercedes drivers was no mistake, and Bottas and Hamilton expressed that same fine margin in a memorable duel for the lead in the race’s opening stint.

The Finn held his nerve at lights-out to hold the lead into the first turn, but the Briton wasn’t to be denied before his adoring home crowd. The pair fought hard, and as irresistible as Hamilton appeared, Bottas was inversely immovable.

Briefly the championship leader got the job done with an audacious pass around the sister car’s outside at Luffield, only for Bottas to win the place back with an equally bold move into the quick Copse right-hander to confirm his lead into Maggotts and Becketts.

But the battle, poised to deliver so much more as the pair diverged on strategy, was punctured by the lap-20 safety car, handing Hamilton a free pit stop that gifted him the lead and victory.

However, the tussle for the podium continued well into the final laps of the race, headlined by driver of the day Leclerc and his burgeoning rivalry with Max Verstappen.

It was a pleasure to watch them spar, dancing on edges of the track and at the limits of fair and hard racing — as it was to know that the contentious wheel-banging scrap for the lead in Austria two weeks earlier had left no toxicity in what will surely become a generation-defining competition for supremacy.

It was a racecraft masterclass that Leclerc described as the most fun he’s had in his senior racing career, but though the Monegasque earnt his third place, it seemed destined to go Verstappen’s way after the more strategically astute Red Bull Racing leapfrogged the Dutchman ahead during the safety car.

The difference, perversely, was Sebastian Vettel.

While his peers were making the British Grand Prix one of the decade’s most memorable, Vettel was anonymous, barely able to hold Pierre Gasly at bay early in the race and incapable of defending the third place he fell into behind the safety car.

Max Verstappen, determined to swipe a place on the podium, relieved him of position with a move into Stowe, but after laps of clean racing with Leclerc, the second Ferrari proved an entirely different proposition.

Vettel attempted to fire back immediately by attempting to slice down the inside at Vale only to discover there was no space to manoeuvre, and he German locked up as he slid to the right, rear-ending the Dutchman. Verstappen was able to continue in fifth, but Vettel tumbled down the order with damage to finish last bar one.

It was a sorry end to the hitherto mouth-watering podium battle an ironically the most notable moment of Vettel’s otherwise insipid weekend.

It’s no surprise to any follower of Formula One that this is only the latest in a growing list of unbecoming costly errors on Vettel’s part.

Last year his mistakes were enough to cost him the world championship; this year, with no title on the line but racing clearly to be had, they merely make him look out of place among a generation of drivers who thrive on wheel-to-wheel racing.

It would be hyperbole to say Vettel’s past it, but at Silverstone it was hard not to wonder whether his rivals have passed him.

Lewis Hamilton’s quest to equal Michael Schumacher’s 91 Formula 1 race wins had to wait after Hamilton was penalised with two five second penalties for illegal starts on track before the race. 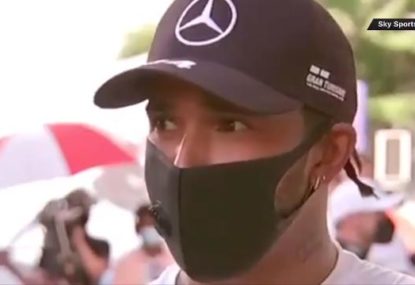 Well, we’re back to snoozefest central appears. Lewis Hamilton is back to his whiny best. And I can’t help but be excited for the future of the sport.