Cam Smith made 400, but is a triple-ton against adversity worth the same?

The cover of last week’s Big League magazine screamed ‘1,000 not out’. The image of 400-gamer Cameron Smith stood at the forefront of triple centurions Benji Marshall and the understated Gavin Cooper.

Three significant milestones, and three journeys unique as each individual.

Fittingly, Smith kicked off the celebrations under lights on home turf before a packed out AAMI Park. Cronulla threatened the launch, but normal transmission resumed, and the future immortal saluted the NRL equivalent of a lunar landing in winning company.

Marshall wasn’t so lucky, with pre-game kisses still moist at the Tigers’ home away from home he masterminded the opening try, but the Eels surged and then kicked again to rip out the final page of the resilient Kiwi’s script.

Gavin Cooper’s elevation to the 300-club caught many unawares and in another layer of confusion the one-time journeyman’s big day aligned with a token trip to Gosford.

Thankfully Jake Clifford’s match-winning strike kept the out of towners on the map and the beaming Cowboy in the headlines.

On stats alone, Smith’s position among the game’s elite is nothing new, but his position without peer was effectively set in stone following the unanimous endorsement from teammates and former greats leading up to last Saturday evening.

But as his status continues to rise, is his path to 400 any more remarkable than Marshall or Cooper’s, and any of the other 35 among the 300-brigade?

Blazing talent, flawless preparation or just a healthy sack of golden bollocks – whatever the reason, compared to others he’s largely had an obstacle free run.

Cunning nous aside, the wiry tactician’s most distinguishing attribute is a blood line to incomparable stock- he’s tougher to break than a Toyota Hilux. Instead of bulk billing, he’ll trump doctors in a game of hide-and-seek.

Amazingly, his Origin strike rate is even better.

By contrast, Marshall’s road to 300 couldn’t have been any starker.

Plucked from school, he started like a clapped-out ute on a corrugated outback track. More often than not, the wannabe Ferrari was parked-up, compiling just 70 games in his first six seasons.

Six serious shoulder injuries, a busted cheekbone and a bung knee would have spelt the end for most. But somehow in between the heartache, the million-dollar play came in just his 38th NRL appearance, on the night of the Tigers’ breakthrough title.

As resilience developed every kid in the park wanted to be Benji, but the countdown to last Sunday at BankWest wasn’t much smoother than the start.

All but lost to the game in 2014, the World Cup winner re-discovered his desire and modified his bounce at the Dragons and Broncos before following his heart to where it all began.

If Smith and Marshall are Mad Monday’s Bon Scott and Angus Young, then Gavin Cooper must be Malcolm – down back chugging to his own beat.

Tall and rangy, Cooper got his start in Townsville before becoming a foundation Titan. Early days were scarred by a ghastly bleached rat tail, where he looked to be heading out-of-fashion rather than on a bus to a decade plus of NRL.

Always there or thereabouts, his arrival back home via Penrith saw his fame rise alongside Johnathan Thurston. And among good company came a premiership and all the trimmings including a Maroons jumper just days before he turned 31.

Thurston taught him to hit holes and with that came the fastest hat-trick in NRL history and last year he became the only forward to score a try in nine straight games. 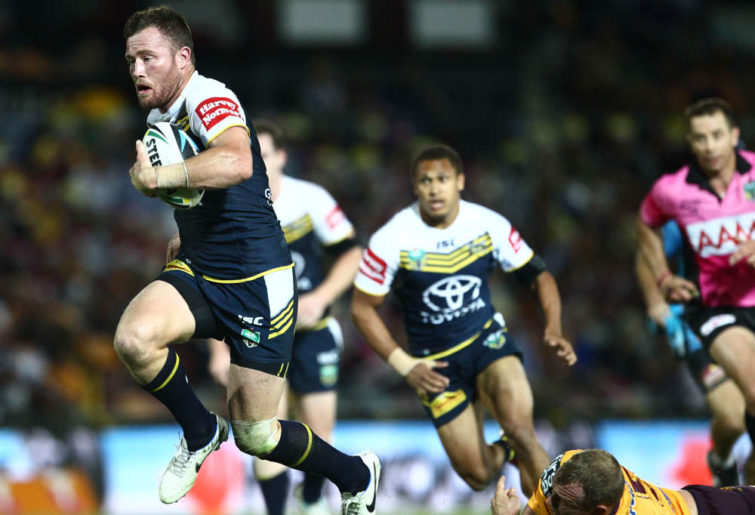 He’s the late bloomer flashy young forwards should get to know. Last season Angus Crichton and Coen Hess took to Origin, now a cup of warm Cooper-resolve could be just what’s needed to help them off their respective club’s bench.

John Morris and John Sutton are the only two in the 300-club without Origin or International honours.

Sutton, redder and greener than an Aussie Christmas, came through the Rabbitoh juniors and joined the top grade two years after the club’s readmission.

One finals match in his first eight seasons wasn’t a deterrent, and fittingly the most capped Rabbitoh played skipper in the club’s only trophy captured on colour film.

Sutton’s story is rare, it tugs at the laces of blue-collar rugby league and may never be seen again. At the very least, a testimonial tribute is in order.

It’s something the NRL should coordinate for all 300-gamers.

Persistence in overcoming adversity, the game was founded on it. Those who do it for longest, deserve more.