It’s almost a Tour de France tradition for the pre-race talk to not be centred around the upcoming edition, but instead, around the drama taking place off the bikes.

In 1998, doping products were found in a Festina team car, leading to the withdrawal of several teams. In 2006, several top riders such as Jan Ullrich and Joseba Beloki were denied entry to the race thanks to the anti-doping crusade Operation Puerto, and in 2011 the race started while judges and juries were still deciding who the winner of the 2010 edition was.

They eventually decided it was Andy Schleck, not Alberto Contador, but the French spectators at the team presentation had already made up their minds, booing Contador and his team.

This year, mercifully, it was not about doping, but about the non-selection of the Tour’s best ever sprinter. Mark Cavendish was left at home by his Dimension Data team, who promptly embarrassed themselves by revealing the decision was anything but unified.

Rolf Aldag, the team manager, told press he had picked Cavendish, only to be overruled by team owner Doug Ryder. Ryder then said it was a team decision, Aldag threatened to quit, relented, and stayed to support the eight riders that Dimension Data had picked.

Without Cavendish, the Tour rolled out of Brussels celebrating the greatest cyclist there ever was in Eddy Merckx with a trip around the Belgian countryside and back to Brussels via a couple of short cobblestone sections, for what looked like a regulation bunch sprint.

It was anything but however, with pre-race favourite Jakob Fuglsang crashing but losing only skin with around twenty kilometres to go, and defending champion Geraint Thomas and sprinter Dylan Groenewegen both getting caught up in a crash with two kilometres to go. Both were able to continue to the end of the stage. 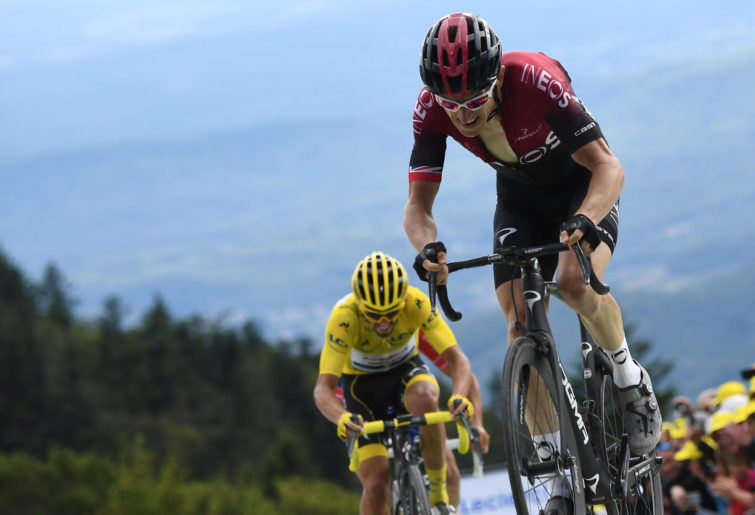 Groenewegen’s absence in the final sprint meant that when one of his Jumbo-Visma teammates put his arms up in celebration it took a moment for everyone to figure out who it was.

It was Mike Teunissen, Groenewegen’s lead-out man, who had won the stage and by doing so took a very unlikely yellow jersey. Jumbo-Visma then went on to give their Tour de France the perfect start, winning the team time trial by a massive twenty seconds to make sure Teunissen would leave Belgium in yellow.

He wouldn’t keep it far past Belgium, however. On the third stage from Binche to Epernay, Julian Alaphilippe attacked on the final climb of the day, the Cote de Mutigny, to join the one remaining breakaway rider of the day, Tim Wellens, and promptly left him looking at his back wheel to win the stage in Epernay by twenty six seconds, taking France’s first yellow jersey in five years with it.

He kept it safely on stage four, which was a typical first week Tour de France sprint stage. Groenewegen made it to the line in one piece this time, but he could only manage fifth. It was the Italian Elia Viviani who took the first Tour de France stage win of his career and made it two wins in two days for Deceuninck-Quick Step.

On Stage 5 Peter Sagan, who in a shocking turn of events already looks to be walking to his seventh green jersey in Paris barring crashes or disqualification, got his mandatory Tour stage win, beating Wout van Aert and Matteo Trentin in a bunch sprint.

The sixth stage was the race’s first summit finish. The peloton tackled 160 kilometres from Mulhouse to La Planche des Belle Filles, knowing that on the three previous occasions the race has finished atop it, the man in yellow at the end of the stage was wearing yellow in Paris too.

The Planche’s predictive power does seem to have waned slightly this year, as halfway through the stage it was clear that the winner of the day would come from the fourteen-man breakaway. The four strongest who started the last climb of the day alone out front were King of the Mountains leader Tim Wellens, Xandro Meurisse, Dylan Teuns, and Guilio Ciccone.

Teuns and Ciccone were the strongest, and Teuns rode Ciccone off his wheel in the last couple of hundred metres to take the stage. Ciccone shook his head in disappointment, but despite a late charge by Julian Alaphilippe, Ciccone ended the day in the yellow jersey as a pretty good consolation prize.

Geraint Thomas took some time from his major rivals, but Vincenzo Nibali and Romain Bardet aside, not enough to really end the hopes of those around him.

Stage 7 was the Tour’s longest at 230 kilometres, and easily its dullest.

Only two men went away out front, serial Tour attackers Yoann Offredo and Stephane Rosetto. The peloton let them sit there most of the day, despite the two men almost willing themselves to be put out of their misery. The peloton did eventually catch them, a bunch sprint ensued, and Dylan Groenewegen finally converted his good form into his first stage win of the year.

After the dull Stage 7 the peloton was almost obliged to provide some entertainment: enter Thomas De Gendt. He and four other riders went clear, but once the finish neared it was just he and Alessandro De Marchi left.

With 15 kilometres to go, Geraint Thomas, along with almost his entire Ineos team went down in a crash after Michael Woods of EF Education First’s bike changed its mind about staying upright. Gianni Moscon’s bike was sheared in two, and a frantic chase allowed Geraint Thomas to re-join the main favourites.

By the time he did however Julian Alaphilippe and Thibaut Pinot had shot off the front of the bunch in pursuit of the now lone Thomas De Gendt. 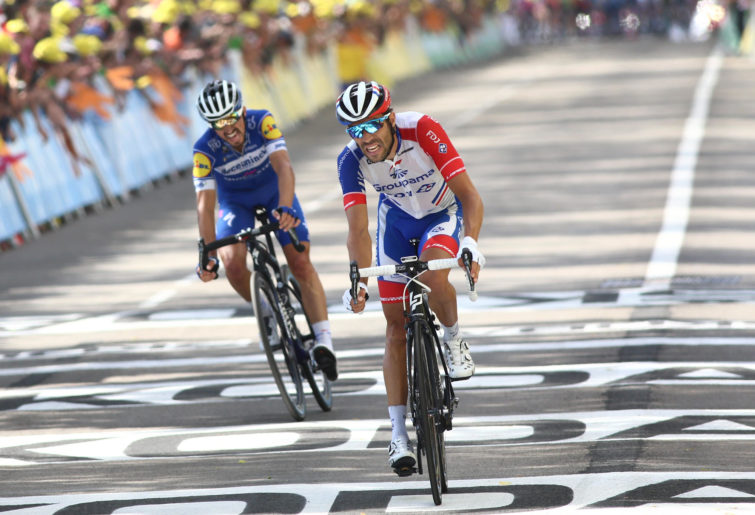 (photo by Pierre Teyssot/Action Plus via Getty Images)

They wouldn’t catch the Belgian, who would take yet another famous breakaway win, this time into Saint-Etienne, but they would finish twenty seconds ahead of the other big players in the race, which was enough to put Alaphilippe back in yellow, just in time for Bastille Day.

Stage nine was 170 kilometres of breakaway friendly racing. A large group got away early into the stage, and eventually whittled themselves down until the two men sprinting for the win were South African champion Daryl Impey, and Tiesj Benoot of Lotto-Soudal.

Impey won to take his first Tour stage win since his team won the team time trial in 2013, there were no major changes in the general classification.

The second Monday of the Tour is usually a rest day. The profile looked innocuous enough, but crosswinds played havoc, splitting the bunch. Kiwi George Bennett lost around ten minutes to plummet down the standings, and favourites Richie Porte, Jakob Fuglsang, and Thibaut Pinot all lost over a minute and a half.

Wout van Aert won the stage to cap off an incredible first half of the Tour for Jumbo-Visma, and incredibly, after two crashes and a few nervous moments, Geraint Thomas finished stage ten in second place on the general classification, behind only Julian Alaphilippe, with his teammate Egan Bernal breathing down his neck in third. Alaphilippe himself doesn’t want to think about whether he is an overall contender for the Tour, but the media does, and has been debating the issue ever since he took yellow.

Thomas still looks the most likely winner though, coming through a perilous first half of the Tour unscathed and ready for the mountains.

Bernal will challenge, but most of the other riders hoping to end Ineos’ dominance at the Tour find themselves on the back foot. Nairo Quintana is still within touching distance, but it remains to be seen whether he can rediscover form of old and challenge Thomas and Bernal.

In the other competitions, Peter Sagan is making embarrassingly easy work of winning a seventh green jersey, Lotto-Soudal have a stranglehold on the King of the Mountains jersey with Tim Wellens in first and Thomas De Gendt in second, Egan Bernal is the best young rider, and Movistar are the best team.

Now we’ll all have to find something else to do on the first rest day: I’ll have to find another live feed to check on the sly at work, and journalists at the race will need to focus on the human drama at the Tour, rather than the drama on the bike (please, start at the Dimension Data team bus).

Between now and the next rest day though, we should be provided with a definitive answer on how far Julian Alaphilippe is going to wear yellow. Surely not all the way to Paris?