It's time Wanderers fans proved they're the best in Australia

Bankwest Stadium is the best ground in the A-League before a ball has even been kicked, but it’s up to Wanderers fans to turn it into the sort of fortress they once called home.

With the FFA Cup just around the corner and a couple of high-profile friendlies having whetted the appetite, Saturday’s showdown with the English Championship heavyweights will give Wanderers fans their first look at the new venue in action.

And with the seats at the northern end of the ground having been converted into 1260 safe standing spaces for the Red and Black Bloc, there’s simply no excuse not to turn out.

Wanderers chief executive John Tsatsimas deserves fulsome praise for getting the New South Wales Government to commit to a safe standing terrace for the club and actually following through with that commitment.

It’s what supporters wanted, it’s what the A-League needed, and now that the Wanderers have got it, it’s up to their fans to make it a vociferous point of difference over every other club.

The three-season stint away from Parramatta may have turned into the exile from hell, but the efforts to rebuild Western Sydney’s supporter base have to start now.

And the honour of becoming the stadium’s biggest and best-supported club is clearly up for grabs. 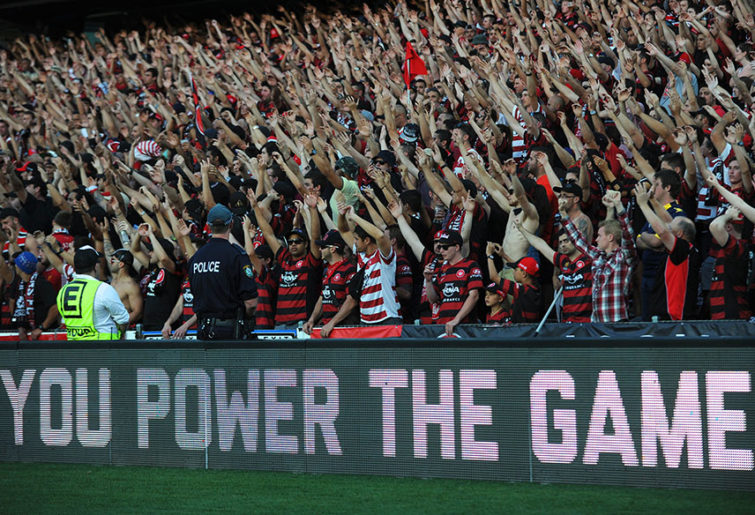 Whisper it quietly around NRL fans – who don’t always take too kindly to actual crowd figures being bandied about – but attendances at Bankwest Stadium have so far been nothing to write home about.

The only time the new stadium has been full was when the Parramatta Eels hosted Wests Tigers in the ground’s first-ever match, while just over 24,000 fans turned out last weekend for the reciprocal clash.

I happened to attend that first Eels game back in April and to say I was blown away by how impressive the stadium was would be an understatement.

But despite that, a couple of Parra games have only been half-full – including against local rivals Penrith – and the less said about Wests Tigers’ abysmal attendances at the ground, the better.

If you build it, they will come? Not necessarily.

So if Wanderers fans want the rest of the A-League – and indeed the mainstream media – to recognise them as the loudest and proudest supporter base in the land, the easiest way to do it is to simply fill their home ground. Because the reality is that, for some time now, the club has had more internet tough guys rattling away at their keyboards than they’ve had actual fans paying for tickets and filing through the gates.

That needs to change – and with decent tickets still available, it should start on Saturday night.

Those who thumb their nose at the chance to watch the first football game at the new venue will come to regret it once they realise just how good the match-day experience is, and it can hardly be argued the Wanderers aren’t viewed as meaningful co-tenants given the way Bankwest Stadium officials have rolled out the welcome mat ahead of this clash.

Why miss the chance to watch a Marcelo Bielsa-coached side in action anyway? After all, it’s not every day one of world football’s most iconic managers pitches up on our shores.

I’ll be watching the game live on TV, although I wish I was there in the flesh.

Nothing could keep me away from the first Sydney derby at the new ground, on what will be another showpiece occasion for the A-League.

Western Sydney Wanderers have finally got the stadium they deserve. All that’s left is for their fans to fill it.