Tips and thoughts: AFL Round 18

Another round of AFL, another five out of nine. Let’s see if we can’t break that streak (hopefully in a positive manner) this week.

Adelaide vs Essendon
7:50pm at Adelaide Oval
Both Adelaide and Essendon now control their own finals destinies.

A win in this game would make a spot in the final eight a near-certainty. A loss wouldn’t be the end of the world for either team, although it would significantly reduce the margin for error.

Let’s start with the obvious – home ground. The Crows are only 5-4 at the Adelaide Oval this season, however two of those losses came against teams currently in the top four in Geelong and West Coast, one came against co-tenant (and the most maddeningly hit-or-miss team in the league) Port Adelaide, and the final one was all the way back in Round 1, against Hawthorn.

For their part, Essendon did pick up a win, against Port, in their most recent journey to Adelaide, however the high-powered 2017 Crows spanked the Dons by ten goals the last time these two teams met at the venue.

What’s probably more of a concern for Essendon, for both this game and the rest of the season, is the injury to Michael Hurley. Cale Hooker is an excellent intercept mark (2.8 per game, eighth-best in the league) and Patrick Ambrose returns from his own injury as another body to throw onto the opposition’s bigger forwards, but no one on the roster can be the lynchpin of the defence that Hurley is.

Dyson Heppell is clearly not 100 per cent either, and losing Orazio Fantasia from the forward line once again is a blow. To make matters worse for the away side, Tom Lynch is back to give his forward line some much-needed versatility and further add to the Crows’ health advantage.

This will hopefully be another Friday night thriller, but the Crows should have the slightest of edges.

Richmond vs Port Adelaide
1:45pm at MCG
They did it to me again.

There’s no more incomprehensible team this year than Port Adelaide. Lose to an injury-decimated Richmond team at home in Round 4, crush reigning premiers West Coast in Perth in Round 5.

Beat league-best Geelong in Round 14, lose to outside the eight Bulldogs at home in Round 15.

Put a second-half beating on Adelaide in Round 16, get beaten up by Brisbane in Round 17, at home, again.

I’ve been on the wrong end of every single one of those results. They’re the worst. I hope Richmond win by 100.

Carlton vs Gold Coast
2:10pm at Marvel
We’ve talked about North Melbourne’s improvement under their interim coach over the past couple of weeks, so now it’s time to give Carlton their due.

Under David Teague, the Blues are 3-2 on the back of much-improved midfield and attacking prowess. Carlton have gone from the truly awful average inside 50 and contested possession differentials of -12 and -10.3 in their first 11 games, to a much healthier +3 and +8.4 respectively in the five games since.

Importantly, they’re capitalising on this newfound ability to move the ball forward, scoring 1.65 points per inside 50, a tick above Brisbane’s season-long number and a huge step up from the 1.46 they were putting up under Brendon Bolton.

The defensive efficiency numbers have got worse (1.56 points per opposition inside 50 to 1.68), perhaps due to a bigger focus on more of an attacking gameplan (Teague was the forwards coach after all), but thanks to the huge swing in field position, the Blues now concede fewer total points per game (90.2 to 81.6).

Obviously, they’re still not world beaters, but the step up from terrible to below average is noticeable.

Gold Coast, unfortunately, are well and truly ensconced in the ‘terrible’ bracket after suffering back-to-back 90-plus-point defeats. We might’ve given the Suns a chance a few weeks ago, but Carlton are playing well enough now that we can feel confident in them for this game.

Greater Western Sydney vs Collingwood
4:35pm at Giants Stadium
We were close to both these teams coming into this week on three-game losing streaks, but the Pies scraping past West Coast by one point scuttled that angle, which shifts the pressure squarely towards the Giants.

In two weeks, GWS have gone from a probable top-four team to only a win and percentage above the teams that are just outside the eight. Life comes at you fast.

Injuries do too, with Stephen Coniglio and Josh Kelly joining Callan Ward to form the world’s best sidelined midfield.

The personnel factors do seem to be swinging the Pies’ way. Scott Pendlebury will play, despite initial reports that he could miss a month, and Jeremy Howe and Taylor Adams will return, although Darcy Moore and Jamie Elliott are out.

Here’s where I come in to bat for the Giants though: if there’s one area of the ground where they have the horses to withstand injury isn’t it the midfield? Tim Taranto and Jacob Hopper have both made leaps this year, Toby Greene and Lachie Whitfield are qualified to shift to more full-time midfield roles, and guys like Jackson Hately dominate the NEAFL every week. 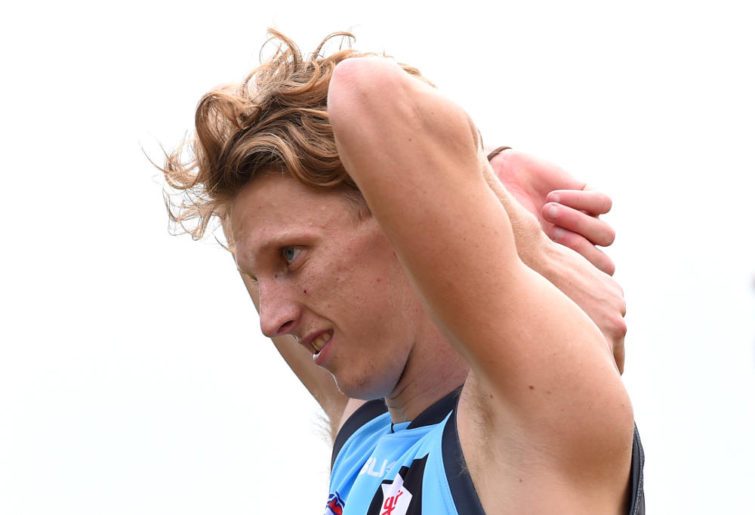 Brisbane vs North Melbourne
7:25pm at Gabba
Since blowing a six-goal lead and only scoring 63 points against Carlton in Round 12, Brisbane have scored 103.25 points per game, while conceding 64 for a 4-0 record – three of those on the road.

The Lions are now only about one point per game behind Geelong for the highest-scoring team this season and, with the defence not leaking as many points, sport a top-four percentage to show that their current ladder position is no fluke.

They also own the league’s best turnover differential at +4.8, although the Roos have been going at +5.2 in their six games under Rhyce Shaw.

Another huge factor in the Queenslanders’ rise has been their sparkling clean bill of health, with Marcus Adams and Zac Bailey the only regular starters to miss significant stretches of time.

As for North, after two huge road victories, is the letdown coming?

I haven’t given Brisbane enough respect the last couple of weeks, and they are 6-1 at the Gabba so far, I have to back them.

Fremantle vs Sydney
8:10pm at Optus Stadium
Fremantle are in a downward spiral, four straight losses shooting down their chance at making finals, while the Swans also have nothing to play for following a couple of losses.

This promises to be a low-scoring affair, you probably shouldn’t watch a second of it with the Lions playing at the same time.

Maybe we just go with home ground? The Swans haven’t been great on the road, going 2-5, while the Dockers have been decent against non-West Coast teams at Optus Stadium, going 5-2 against clubs that don’t also call Western Australia home.

They don’t inspire a great deal of confidence but… actually, you know what? Freo suck right now, no one would feel good tipping them, plus Nat Fyfe is now a confirmed out.

That seals it, Swans it is.

Geelong vs Hawthorn
1:10pm at MCG
Since their bye, Geelong haven’t been able to achieve the same level of dominance they displayed in compiling an 11-1 record to start the season. They’ve gone 2-2 over the past month while only scoring 72.8 points per game – bottom four in the league if maintained over the full season.

To be clear, contested possession is definitely not the be-all and end-all – the surging Tigers are dead last on that front and the Hawks during their three-peat years were never a good contested side, it’s simply not part of the gameplan for those still-successful teams.

But for Geelong this year, it’s obviously a key to their success and this match is set up perfectly for them to re-discover that dominance.

Melbourne vs West Coast
3:20pm at TIO Traeger Park
Speaking of contrasting styles when it comes to the contested ball, this match pits Melbourne’s +5.3 differential (fifth in the league) up against West Coast’s -9.6 (second-worst).

So why do I like the Eagles? Well, unlike Geelong, the Demons are only a 50-50 proposition when they win contested possession so far this season. Mark McGowan of afl.com.au cited numbers from Champion Data this week indicating that Melbourne have been the worst team at both kicking inside 50 and taking shots on goal.

It was one of those delightful moments when the advanced analytics perfectly back up what we’ve been watching. The Eagles have never played at Traeger Park before (Melbourne have a 2-3 record there), but they’re clearly the stronger team and with a lot more to play for, should tack on another loss to the Demons’ sorry season.

St Kilda vs Western Bulldogs
4:40pm at Marvel
Here’s what I said the week after Carlton won their first match under interim coach David Teague: “Next time someone gets fired, do me a favour and don’t let me pick against the interim coach, okay?”

I haven’t done a great job of following my own advice this season and yet again, my resolve is going to be tested.

The Saints have lost nine of their past 11 matches, with the only wins coming against a pre-Teague Blues and the flailing Suns. Meanwhile, the Bulldogs have found form, winning four of five since the bye, including impressive victories against Geelong and Port Adelaide.

A Saints win wouldn’t seem to be imminent, but we thought the same about Carlton, who had lost ten of 11 before firing their own coach. Maybe there’s something to a team playing a slightly different game style that their opposition hasn’t seen before?

The Saints were pretty game against Geelong, did the brass sense a few wins coming up (Melbourne, Fremantle and Carlton are also among St Kilda’s last several games) and, having already decided Alan Richardson was gone at the end of the year, decide to move on now before the coach could gain any momentum that might lead to calls for him to stay?

Whatever the case, the Bulldogs do seem beatable (their recent good form also includes slender wins of three and eight points against Carlton and Melbourne respectively), so let’s give it a crack. It’s not like tipping the favourites each week has been that successful recently anyway.