Would a merged Dragons and Sharks outfit do better against teams like the Warriors and Panthers?

Round 18 NRL action began at the Warriors’ second home, Wellington’s Westpac Stadium, and the ‘cake tin’ played host to a wet and slippery encounter between two desperate teams.

Off the back of four straight losses, another defeat for John Morris’ Sharks threatened to make semi-final football highly unlikely in 2019.

Despite the Warriors living another inconsistent and frustrating season, they sat just one point behind the Sharks leading into the match, knowing a win would keep their somewhat remote finals chances alive for at least one more week.

A penalty goal to Issac Luke had the Warriors in front early before a ninth-minute try to Briton Nikora proved the perfect response for the visitors.

When Matt Moylan scythed through the Warriors defence just moments later and Chad Townsend supported through the centre to score, the favoured Sharks looked set to take control.

Shaun Johnson converted both tries and the floodgates appeared likely to open. To the Warriors credit, they didn’t and, when Blake Green crossed after a great solo run in the 24th minute, the conversion saw the visitors back within four points and down 12-8.

What followed was a flow of possession and pressure for the Warriors and how the Sharks kept them scoreless in the lead up to half-time is something of a mystery. Going into the break, the home side looked well on top and the Sharks were staring down the well of a fifth consecutive defeat.

After the break, the Warriors kept brewing and a questionable decision to kick a penalty goal in the 55th minute brought them within two points.

As is often the case with penalty goals that sacrifice field position and have the conceding team pleased their line remained intact, the momentum swung quickly and Sosaia Feki crossed in the corner for the Sharks within minutes.

Johnson’s precise conversion stretched the lead to 18-10, yet the teeter-totter nature of the match was to continue when Kodi Nikorima burst through some poor Cronulla defence to score a converted try in the 63rd minute.

With 15 minutes remaining and the Sharks ahead 18-16, the proverbial grandstand finish seemed likely.

And then, from nowhere yet somewhat predictably, the ill-disciplined footballing goose struck again. Andrew Fifita produced a needless late and shoulder driven hit on a Cronulla decoy runner to gift the Warriors two points and condemn himself to ten minutes in the sin bin. 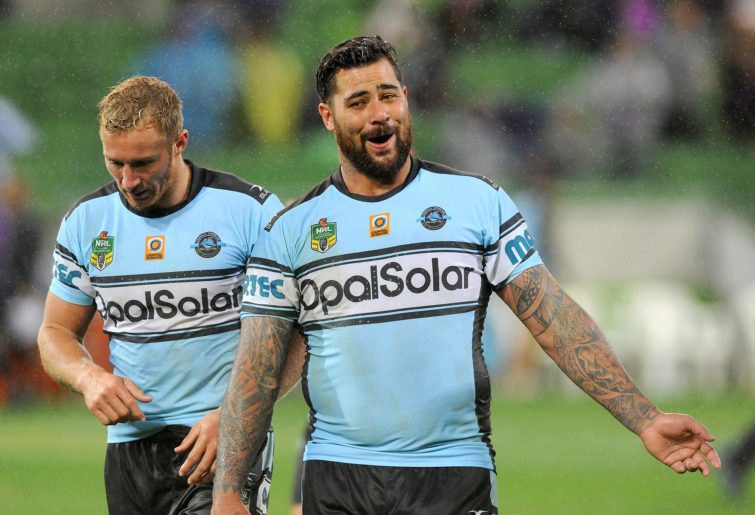 In the later game, Penrith jumped the Dragons early at Panthers Stadium after a dubious try to Brian To’o and a Brent Naden four-pointer set up an early 10-0 lead for the home side.

Losing three from their last four, things began to look familiarly ominous for the Dragons. However, after a poor James Maloney kick crossed the sideline on the full, they managed to swing the tide of possession.

Mikaele Ravalawa scored in the corner almost immediately and Josh Kerr stormed over the line after excellent lead-up work from Cameron McInnes in the 35th minute. The Corey Norman conversion sent the Dragons to an unlikely 12-10 lead before To’o beat appalling defence from Kerr and Korbin Sims to cross late in the half and re-establish the Panthers’ lead prior to the break.

Seeking their seventh win on the trot and holding a 16-12 lead, the second half presented a season-defining opportunity for Penrith.

They came to the party and parlayed the late first-half points into a quick start in the second. Tries to Moses Leota, Nathan Cleary and Naden’s second saw them skip clear to a 34-12 lead after 57 minutes.

Reagan Campbell-Gillard crashed over in the 61st to further embarrass the Dragons and holding a 40-12 lead, Penrith were well and truly home in front of a raucous home crowd.

New South Wales forward Paul Vaughan did manage to cross the line late for the Dragons to pull the Red V back within 22, yet his try came against 12 men, as Penrith forward Viliame Kikau sat in the sin bin after a seemingly harsh decision to remove him from the field of play.

The losses condemn both the Sharks and Dragons to a season of lament and one without finals action. Given their rosters, their fans are entitled to ask some serious questions.