How to target the All Blacks, Part 4: Baiting the over-rush

Traps exist in Rugby. Teams can lead a team into an area, or feign a weakness, to immediately rely on the opposition trying to take advantage.

This keenness by the opposition can reveal a weakness that your team can exploit in itself. One such weakness can be coaxed out of the All Blacks with the right know-how.

Hold out baits to entice the enemy. Feign disorder and crush him. Cleverly done, this can be used to great effect.

The All Blacks have a very strong set piece. Teams often say: “We have to be physical, we have to target and dominate the set piece, stop their platform for their back play”.

Whilst accurate, as the set pieces are the foundation stones from which you build and launch your whole game, the All Blacks often dominate.

New Zealand are technically very proficient in this area.

However, when they are overly dominant in the scrum or the maul, their inside defence can get cocky. They’ll rush off their set piece momentum and catch the opposition back line as far as possible, but this can cause issues for them.

If the pack intentionally retreat in a maul and pick the ball out, they can plan options that exploit that early rush. We can see where this over-eagerness on behalf of the All Blacks gifted the opposition.

We see the AB inside defence rush past Michael Hooper focused on the next phase, which allows Hooper his break. All from dominance of the maul.

Another example not five minutes later.

This rush by Aaron Smith is near identical to the second Wallabies example. There were, however, a few key differences.

An offload to Serin would’ve been very dangerous for the All Blacks at 38:44. Smith being committed with the offload and Todd in the scrum would have cleared the channel right to the line, as McKenzie has pushed too far up.

Alternatively, a dummy at 38:43 from Gourdon could have forced Smith’s body position to the outside, clearing Gourdon’s path.

Countless moves can be developed around this principle with the fullback, outside centre, blindside winger, the dynamic between eight and nine. But what the Australians did that the French didn’t is the difference between break and no break.

England 2014
This was performed against a much more experienced team, with the likes of Richie McCaw, Tony Woodcock and other stalwarts still in the side. This was 2014, and shows that the teachings of the All Black defence – that Rush 10 Triangle – can again be worked against them.

The margins are unbelievably small in Test rugby. Joe Marler placed his arm around Owen Franks for near half a second – this looked unintentional, but it opened the slight gap between him and Brodie Retallick that Ben Youngs exploited.

To get the advantage off a rush defence is normal, and of all the ways to attack the All Blacks, this one is the least likely to consistently get results, but it does get results.

If a team can pre-empt this rush and design plays to subtly block and exploit this gap on the back of a dominated set piece, it can lead to a huge gain over the advantage line if performed correctly.

Done too often, though, and it will be counter-productive.

The All Blacks, through analysis, are aware of this. The All Black Rush may hold in wariness of the threat, anticipating this as a ploy on the opposition’s part. This gives more time on the ball for the first receiver, but can nullify this point completely for the moment you need it most.

By feigning inferiority in the pack, you spike the natural competitive aggression of the opposition forwards to drive you back for the penalty, meaning their heads are down and they stay in. This in turn provides forward momentum, which encourages Smith forward to cut the first-phase move off at source.

The irony is that this aggression from both Aaron Smith and the forwards can take them out of the game, opening the gap. The emotional response to dominate leads themselves into the trap. However, you can’t leave it all to them. You have to do the little things to direct them into the position of weakness.

Hooper made sure his positioning stopped Ardie Savea getting close to Will Genia. He was assisted with this by the turn in the scrum. Kelian Galletier did not stop Todd. Genia’s dummy took Smith’s attention towards Foley, Gourdon did not dummy and kept Smith’s attention on him. One team scored the try, one didn’t.

Little things for a big effect.

The Champagne Box
This only has to work once.

In all the closely contested finals of the World Cup, the winners nearly always had a strategy up their sleeves that the opposition could either not deal with or not expect.

These were a collection of the most specialised plays and the best moves we had, practised regularly, and only uncorked at key moments in key games.

The Teabag move from the World Cup final in 2011 is a prime example.

That try gave the winning margin to the All Blacks. It was kept as a game-winner for the big games. So much so that it hadn’t been used since the 39-10 Tri-Nations win over Australia in August 2008, so the French analysis could not pick it up.

England had their own. The Zig-Zag pattern, designed to orchestrate field position for a drop goal in the centre of the field – the pattern from which Matt Dawson made his 10-metre break in 2003, the break that gave Jonny Wilkinson the opportunity to kick the drop goal.

The kick that won the World Cup.

That is how fine the margins are in international rugby in today’s day and age.

Any edge, any weakness, concrete or reaching against New Zealand must be taken. This particular flaw may seem over the top, but if one play designed to exploit it only ever works one time to create the opportunity to win a World Cup.

A team would be happy spending years practising it. 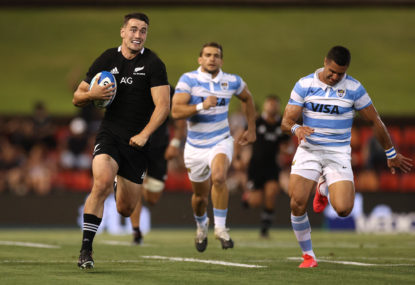